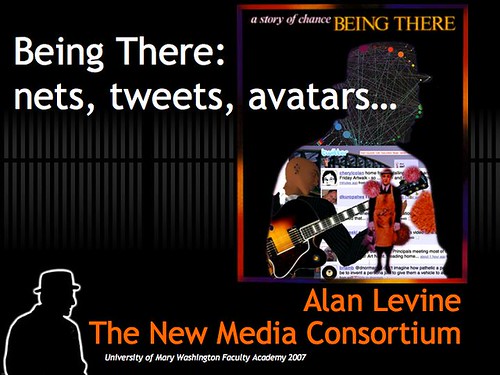 Title is a nod to colleagues in the audience who are film buffs. Is anyone a fan of Chance the Gardner? www.imdb.com/title/tt0078841/

My metaphor may land askew (not the first time), but as a simple person thrust into a strange new world by sheer circumstance, maybe he was foreshadowing web 2.0– and his child like basic perspectives is what so engaged people around him.

In thinking about this session, I kept returning to the value and power of “being there” with all of this exploding technology.

Today was my main presentation for Faculty Academy titled Being There: nets, tweets, avatars… in which I blitzed the audience with 71 slides, mostly flickr’s creative commons licensed images matching my warped metaphors, where I aimed to paint a picture of the distributed and perhaps unfamiliar online social or community space such as twitter, flickr groups for interests you would have never heard of, comment blogging, and a whiff at Second Life.

My suggestion is that ‘expertise’ embodied in a single person is a quasi myth, and the suggested route is to “be” in your own constructed network that provides distributed expertise.

On a larger plane (plain?) I tried to use twitter as an phenomena where people misjudge a technologies attributes and potential based on the seemingly inane content found there. I also tossed in a wild leap at relating teaching to cover bands (What I learned from Johnny Cash), the daring statement that “the internet is really big”, some pointers to resources of online facilitation (that would be you, Choco Nancy!), and a photo of my dog using Second Life. And in the eternal optimism department, I re-used some images to suggest the way through all the craziness is keeping a child like sense of wonder

Anyhow I had fun. People laughed. 75 minutes flew by.

You can find the presentation graphics and links, notes as a flickr set and as a slideshare show (yes I used PowerPoint, mainly for this purpose- not too happy with slideshare- it does not preserve hyperlinks or keep the info in the notes field).