It was more than a year ago that I got an email request from Millenium Press asking about license to use one of my Gigapan images for what sounded like an interesting project- they have published the world’s largest atlas of the world. Earth Platinum is a printed atlas that is 6 feet high!

The bog book is currently on display at the British Library, and if you ask for assistance (apparently it takes special training to flip the pages) at go to the section on PLate Tectonics pages 24-25, my image fills the lower frame of these pages: 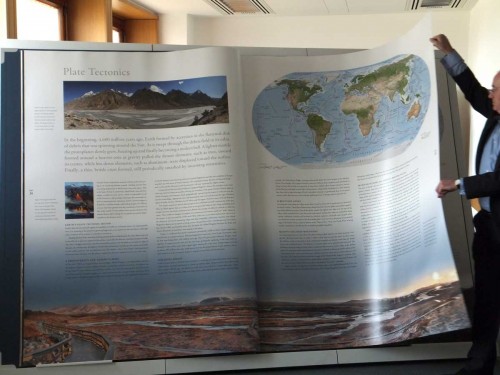 That is quite a thrill.

For what it’s worth the original imagemof Thingvellir in Iceland they found is in the zoom and pan from of Gigapan at http://gigapan.com/gigapans/13062. I was a bit surprised when they asked, because this image has all that ugly banding around the sun. That was because it was so cold that day I forgot to set the exposure hold lock on my little camera.

It looks they cleaned it up nicely!

This image (it weighs in at 0.51 Gigapixels) was taken on the last day of my November 2008 house sitting visit to Iceland. I took a road trip to see this area of active geology, essentially an on land version of the rift valley where new oceanic plate is being formed along the seam of the Mid-Atlantic Rift. Here is a photo of my Gigapan in action taking the scene above 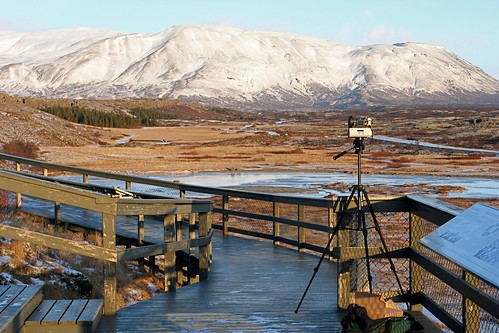 The other thing worth knowing about this place is that it was a gathering spot in the year 930 (no typo) where the Icelandic Parliament was formed. They have some old democracy there.

The irony of this story was that the only other people here were three american tourists. I was surprised when one of them asked me “Is that a Gigapan?” as I had not had one person recognize the rig in the year or two I took it on the road (also in Shanghai, Hong Kong, Australia)– but this guy was actually affiliated with the Carnegie Mellon University research group that developed the software.

I am rather stoked to see my photo in the big atlas! Now I just need to build a big bookshelf (kust kidding, I do not get a copy).