Find out the reason that commands you to [blog]; see whether it has spread its roots into the very depth of your heart; confess to yourself you would have to die if you were forbidden to [blog].

Please, do not look.

Thanks to some fun sponsored by Reclaim Hosting, I ended up with a new spiffy domain to play with.

Let's play a game since the weekend is almost over. Find an *awesome* domain name and if I like it I'll register and give it to you.

I almost forgot about it when poking around my directories, and saw the directory sitting there. I thought about maybe putting my worst photos on a site… but enough about my photos, what about other photos?

So here is the concept. This site now is set to every hour, rummage around flickr, and find a person who’s photos you most likely would never come across, and display their 20 most recent uploads: 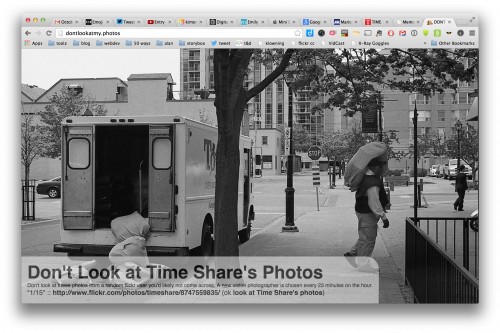 This was a sloppy assemblage done in an hour or two of fiddling. It’s a layout I did as an experiment before just to experiment with calling the flickr api via Javascript.

To re-rig this I would need a way to find a new flickr account or “owner” to swap into the demo I did using my own account.

It works like this. Once an hour (23 minutes after the top of the hour) a cron script calls an ugly php URL that runs some magic through flickr to find the subject. It then rewrites the main page from a template file.

How is the magic done? I use phpflickr to call on the photos.search api. I used the explore feature to fiddle with the settings that I use to search to find a semi-obscure flickr user. The mis-logic is:

The code on the display page could be done better but it gets the 20 most recent photos from the user (here is the data for my own) into a javascript array, chooses 1 at random, and sets it as a background image that fills the screen using the jQuery Backstretch plugin. My ugly code reloads the page based on a timeout, but I see that the newer version of Backstretch has a mode to do as a slideshow.

Maybe a future project to make more elegant. Or not.

Or is this some sort of “anti-societal artistic provocation”? I hope not.

But I kind of like the idea of trying to find and display photos that maybe had little hope of being seen?

And apologies to anyone’s photos that end of there- ITS ALL RANDOM! I will not share the silly variable names I refer to you in my php script. Fair enough?

Thanks again to Reclaim Hosting for many things, like the top ten reasons to make lists of things to do on your domain. You only need one reason in my book.

Reclaim hosting is the spirit and soul of the real internet.

Thanks for the all the domains!