On my 2013 visit to Hong Kong, my friend Nick and his wife Kelly took me on a trip to this place called Stanley. When we were going through the market, Kelly picked out a shirt for me; she said it had a Bhuddist charm written on it. I likely forgot what else she told me about it, but its among my favorite ones in my rotation: 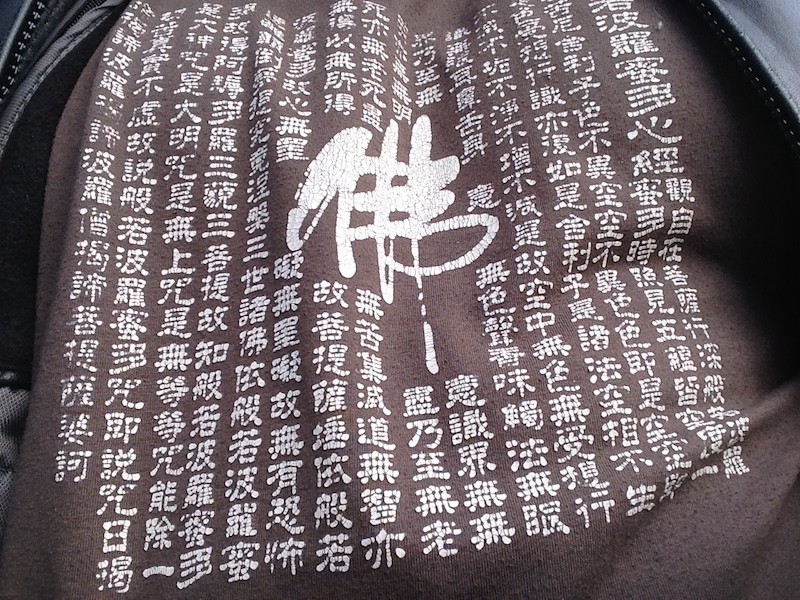 After a meeting today at the Open Learning building here at TRU, in the hallway I bumped into Loretta, and we talked a bit about blogs, portfolios, word documents, travel… and she asked me about my shirt. She’s from Taiwan and started to explain the meaning of the Chinese message on it (the big symbol represents Bhudda). I knew I would forget, so I asked her if I could record her explanation:

I’m thinking it is what’s described in Wikipedia as the Heart Sutra or ?? (Loretta called it the “Heart Bible”).

I like the shirt even more, it is an expression of what we attach value to, of the powerfulness of emptiness, and the longevity of ideas, of the heart.

Now I just have to practice that mantra.

Back in December I was in Vancouver, and on day was on the bus headed downtown, doing my normal routine of looking detached on a bus full of strangers (but not fac eplanted in a phone). And elderly Chinese man sat across for me, staring intently at my shirt– then I realized I was wearing this shirt. I watched his lips move slowly, and then a sweep of calmness across his face, ending with a broad smile and a head bow.

Not a word was passed.

All of these random moments in our lives, are they just scattered atomic bits? I think not. I seek the threads.