Sometimes I get lucky and two ideas on different paths cross paths right in front of me. It’s a matter of just reaching out and grabbing them.

I wondered somewhat about the downside of not making the content accessible, which is not a direct concern, but one of those things that one should keep in mind.

At the same time, in an email group, my colleague from Maricopa, Alisa Cooper, shared a link to an interesting tool- a speech recognition add-on for Google Docs.

My stream crossing idea was to record the audio at the same time running the add-on to see how well it did with transcription. I’ve had the usual mixed bag experiences of garbled YouTube annotations and yelling corrections at Siri.

The tool adds itself to an Add-ons menu in GDocs. I almost gave up, because it never showed me the promised “start” link, but it showed up when I saved the doc, closed, and re-opened it (once again, the Old Reboot Trick works).

I set up my Samson Meteor mic, turned on Audacity to record, then activated the Speech Recognition add-on. I put all of this behind the web page for the activity so I could focus on whatever unplanned commentary I would make (hey I am just testing this out).

It was interesting to see what it came up with:

There is no response to end a sentence or change paragraphs, so you get the blob of text. It got a good amount and messed up maybe 20%? 25%? Even at that, I sure prefer that than trying to transcribe from the audio (if you have ever seen me type, it may have been an instigating reason for my marriage ending).

Here is the blob that came out before editing it:

And you can compare it to my post edits in the doc (which I guessed more at than trying to match perfectly to the audio).

In Audacity where I recorded it, I trimmed the in and out points. To demonstrate some techniques, I decided to put some music in as a background, using “Perspectives”, a creative commons licensed track from the most useful Incompetch Royalty Free Music Collection — by the way this site does a stellar job of providing attribution text:

In Audacity I use one of my favorite bits, the envelope tool to fine tune the audio to duck it under my un-dulcet mumbles. My voice is the top track (I again was too close to that mic), and the music in the lower track. 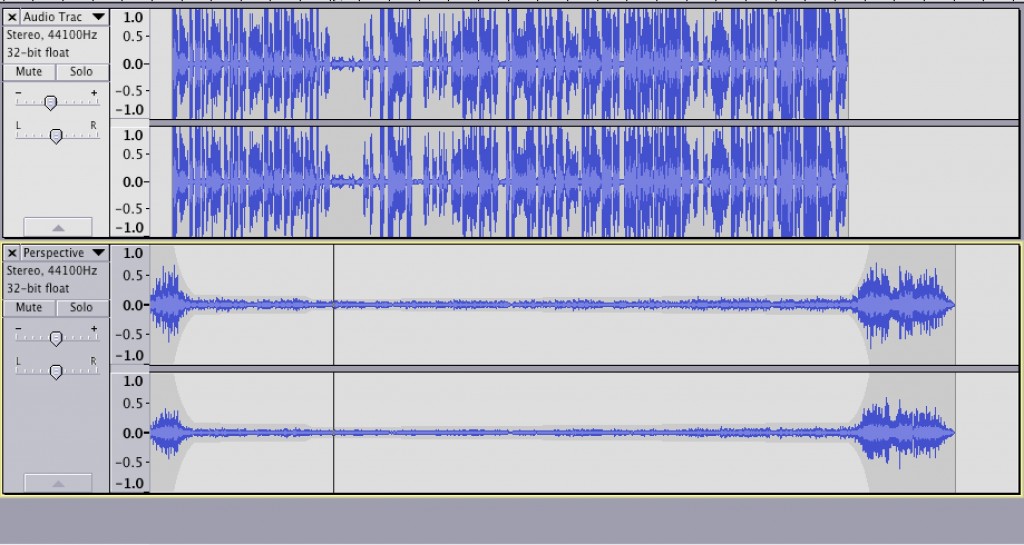 In the You Show page I am able to embed the audio, add a download link, and a link to the transcript I did in Google Docs

It’s not perfect, but was worth experimenting with.

While looking for more information, I stumbled into Online Dictation, a web based speech to text generator. I was fascinated to watch how the words morphed and change as I spoke. It seemed to do a little better, and I was able to have it end a sentence by trying “dot” (or was it when I said “period”)? Here is a little screen cap of my test.

Actually this would be pretty neat for doing some mashup type videos.

Stuff just happens all the time, crossing streams and everything. On the net, its more than fine to cross the streams