I gotta say I love getting some good feedback on yesterday’s post about my new gig via comments and tweets. The well wishes were, well, great, but what I really valued immensely were the suggestions people made in my response to me discussion on collaboration systems.

My first day was spent somewhat taking on a request that I recommend an online collaboration space/system for the project. It will be for a geographically dispersed group, likely technically adept but not technology developers, to offer a place for discussions, sharing documents/links/media, maybe some project management, likely integrating with other services, and also, have some portion that is public.

As mentioned, because of my experience using it for several projects this year, is Slack (though it lacks the public part, it is proprietary, and there is the 10,000 message limit on searching).

I found 8740 results in a google search for “alternatives to slack”. Looking at AlternativeTo I cannot even see the bottom of the list 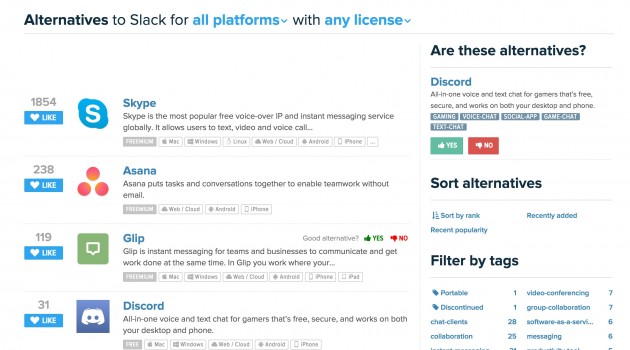 I do like the ways I can filter the results on this site, by pay model, platform, etc. And I can vote (sorry Asana, I accidentally clicked a “no” to recommend and I cannot find a way to un-vote that, gulp). It’s somewhat of a mixed bag, given the Skype is at the top, between some being communication tools and others being communication and document management tools and others being collaboration tools.

I started looking at the ones that were hosted but had free options, and tried to see how crippled the free is. It seems like they all offer the free hooks but want you to Premium-ize to some paid plan. Or Pay mega bucks for a self hosted version.

I found a few from Ten Alternatives for Slack (Beebom). In a quick look (meaning scanning yhe features, I find the demo videos pretty much pretty graphics ads). I saw promise in:

With hosted you will have to hope for reliable uptime, that you have not missed a critical limit on free, and the possibility that the service will even be available for the duration of your project.

For looking at open source options, which might be the preference for Creative Commons, I sifted through 4 Open Source Alternatives to Slack (Opensource.com) and another list from VentureBeat.

The ones from my first scans that caught my eye included:

Pretty much they look similar… to Slack. 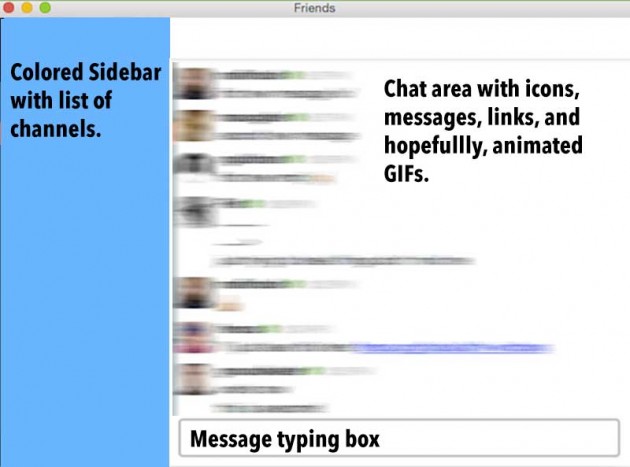 I grossly generalize. They differ in terms of integrations and limits/use of media and synchronous tools.

This, welcome to Paradox. To really compare them, even a demo session won’t cut it. I won’t really know without putting it to use in a real situation, with real people. The time it would take to do this? And so I have to thus make some hunch guesses based on limited skim by, reviews, and what people I might know who have more experience.

And while I understand why people want to know when they ask, and despite the endless flow of listicles that people publish, there can never be a simple answer to “What is the best tool for X?” There are a lot of importance differences between X for me and X for you.

Thus, the answer then often comes from the now cliché, somewhat of an industry for Chase Jarvis, but at it’s heart true for photography: 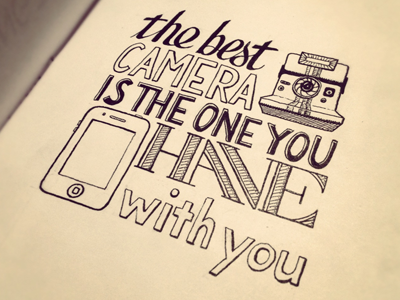 I am writing nothing revelatory here. This is just recognizing that we have a frame of experience of what we know, that we mix in what we can summarize from web searches and recommendations by people we trust/respect. At some point, the hunch kicks in, we pick one, plunge/commit. Then we find out what we guessed wrong, or the unexpected limit, we find work arounds, or have to adjust our own processes. Sometimes we have to painfully accept that we guessed wrong, and might have to do a complete rewind.

It’s not just a feature set of a tool, it’s mixed in with our own experiences, the needs/interests/aptitudes of others we hope to use the system, and a quasi large amount of situations we can never anticipate. That’s a lot of delta in the equation. The more we can flex with this uncertainty, and find the end arounds, the better we might be in the long run. We are the most important thing in the feature list of tools.

And in some sense I have to spread some wonder about how much effort is spent building more or less tens, hundreds of platforms that are more or less the same functionality, many of which will not be around a year or two from now– why are there so many alternatives to Slack? Might it be there is something to Slack? I am not saying this is reason to go with it, but as a platform that has surged to the front of the pack, all the ones trying to catch up are likely not quite as mature. But it’s hard know that from their Every Bootstrap Website Ever site.

Or am I wrong?

And then you will face the open purists. They spend inordinate amounts of time, energy patching their BananaFizz Linux OS, or trying to figure out what is cumbersome in GIMP that is fluid in Photoshop. I do not question the Open Purists and their IRC channels, I can respect the lines they stand behind. But I would rather be getting stuff done than figuring our end-arounds.

Now lest you think I am building a sand castle case to select a proprietary platform, think again. I’m just trying to work this out. I was pretty keen with the functionality I saw in Rocket Chat, and if I can make use of an open tool without too much fuss, I will lean that way.

Are there absolute Best Tools?

I have not made any decisions at all. Just talking out loud.

And I see no road sign that says “You Are Now Leaving Paradox.”

Top / Featured Image: This one was easy; I knew I had my own photo of the sign for a small town in upstate New York that I drove through in 2012. Yes, it is a real place. It’s also a lake nearby.

The photo is mine on flickr https://flickr.com/photos/cogdog/8077130869 shared under a Creative Commons (BY) license… with my clever title “Just Having a Town Sign is Paradoxical”