The translation of “standard” Lorem ipsum text might be talking about mountain biking… This rather un-nessary bit of web tinkering was triggered by some tweets this morning from Tom Woodward about one of the variants of “filler text” generators, the stuff many web designers or typesetters (are there typesetters left?) put to act as place holders for text. I have a favorite source myself…

Did you get there via https://t.co/SdzB2BJHVm That's my go to for fill text

And that got me thinking to a long un-finished web project to build a site with maps and information on the local bike trails a group of local volunteers (including me) have been part of around Pine and Strawberry (well I do have a domain and placeholder site).

I’m finally building out a prototype in WordPress but need some placeholder text for trail descriptions. Just for fun I hit the googles and did find a Velo Ipsum generator (part of a fantasy bicycle game site, save that rabbit hole for later). But that generator created sentences a bit more leaning towards road racing and Greek words, e.g.

I do like on that site there is some cut and paste code to use the generator dynamically via Javascript in other sites.

But still, not what I wanted. Then I remembered that last Spring I hacked together a loreum upsum generator based on text from the Creative Commons FAQ.

So all the pieces were there to just change the Javascript library code of sentence fragments (one mondo array, lame), and some front page make over.

But what to use for content? I did start with lifting sentences from The Wheels of Chance: A Bicycling Idyll by H. G. Wells from Project Gutenberg. I was yanking sentences that were more descriptive of bicycles and the landscape, not the drama.

It worked, but was not great. Then I got an idea to instead pull from bicycle trail descriptions. I ended up pulling them from the Trailforks site, which is crowdsourced database of bike trails in the US and Canada. I ended up going to the state/region listings, then into the top 5 for most states, and pulled trail descriptions into a text file. I then started popping in some selected comments.

Then it was some search and replace clean up, putting line breaks after periods and exclamation marks, then replacing end of line characters with code to put quotes around each line and end with a comma… all to get giant array of sentences. 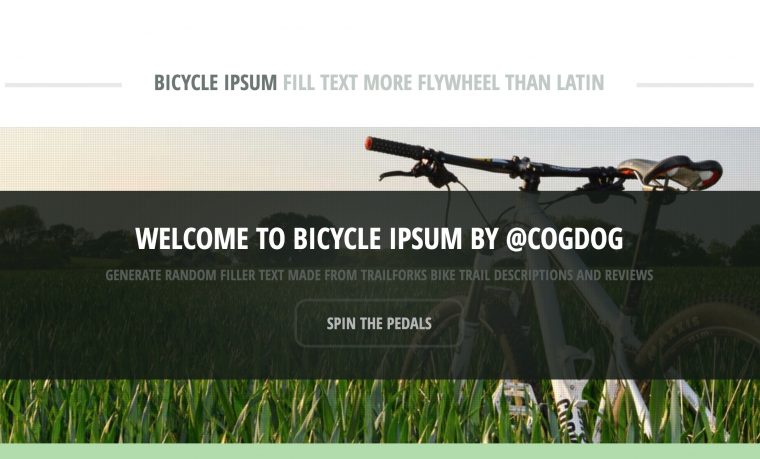 Where you can spin the pedals and get stuff like…

The valley to your left drops away as you climb up and through a shallow waterfall. Few sections rutted out but great experience for my first ride there! As the valley begins to close, the route transitions to a section of open forest. Out here you will find the most legal features including log rides, jumps and rock rolls in South Tahoe including the new jumps, berms, rollers and hips TAMBA and SBTS built in 2014. Out of the parking lot, take your first left. It is not hard to get to and is very fun to ride. One of the best downhills in the area.

Great conditions today. After a very quick downhill out of the gate, the route climbs up through big forest. All hits are roll-able and built for progressing your jumping skillz. after the jump you will enter the trail between two trees (fairly close together). Freeze-thaw cycle isn’t awful, but does make this trail rather slick. Or with only moderate climbing involved these trails can keep almost anyone interested for hours. This trail can be ridden as a loop, or could be ridden as an out-in-back.

So be careful with your carbon frames! Flow trail is a bit tight at the top, but gets really fast as you transition to the lower Rush. This trail is the cherry on top when riding Porcupine rim! The trails are well drained and suitable for riding when wet. Proper sized jumps, berms, rollers and wooden features, so sick! From there the trail stretches out and travels pretty fast into a big berm with a view out into the valley. There are also several sections of slickrock that are fun to ride and allow you to pick your own line.

I am sure there was a need for this in the world.

Well, at least for me.

It was more for the fun of building than anything. You can find the source code for Bicycle Ipsum as well as Simple Ipsum, a plain un-formatted one that is the generator engine only.