creative commons licensed ( BY ) flickr photo shared by Jeremy Levine Design Having done more than a handful of Feed WordPress powered syndication sites, I’ve had some interesting opportunities to handle difference scenarios when the course/event actually decides to run another year. I posted an extensive write up for The Harvard School of Graduate […] 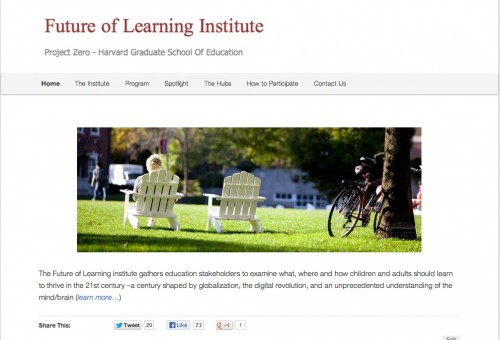 Last June I was approached by Justin Reich from Harvard (and newly with EdX) about building a site for the Future of Learning Institute, that is part of Project Zero at the Harvard Graduate School of Education- he was looking for the syndication/aggregation features I had created for the ETMOOC site’s blog and twitter hubs. Apparently, their local CMS (iSites) was a bit cumbersome before to use, but it also sounded like they wanted to extend people’s participating in social media (read more from Justin on the needs for the site).

Oh yeah. They wanted to be on the Syndication Bus (Magic Bus! Magic Bus!)

Syndication seems to be in the air, given the amazing stuff Mike Caulfied is doing with Water106. There was also I understand today a ds106.tv episode with Jim Groom, Tim Ownes, and the hatted one, Howard Rheingold, going over how syndication bus works with WordPress (drats to Gila County for having me inside all day for jury duty).

I have grand plans here to document how the Future of Learning site was built, and as I pulled through my notes and the theme code, I got depressed as there are a lot of parts, so I hope I cover everything:

A difference for this event from the previous syndication projects I have done is that it was for a shorter time span (a week institute) rather than a course. Since I was brought in to build the site, not be part of the institute, I did not see much directly of how the site was used and presented.

This is one giant ever scrolling post. You have been warned.

cc licensed ( BY SA ) flickr photo shared by Orin Zebest It is not going down the drains, and despite outcries of technologies being dead, syndication based ones are at the heart of what makes the web works. An understanding of how distributed web-based publishing sources can reconfigure and aggregate information in constructive ways […]