I am convinced all of my software projects are perpetually in progress, but that never lets me stop from spitting out a new one.

As a preface and someone who has worked with them seriously only a few years, I am deeply in techno love with database-driven web sites, notably the object of my affection being mySQL. There seems to be no limit what one can do (well my technical skills can be limiting) and to reshape information in ways not possible in the static pre-life.

But enough warbling. This is the latest creation.

In mid May we held what was the most successful and well-received Ocotillo Retreat, our annual instructional technology event that takes place a few days after spring graduations (they have been going on for 18+ years). Our theme this year was the GPS motif of “Lost in Technology” and we had over 50 poster-less poster sessions, keynotes, and classroom sessions. 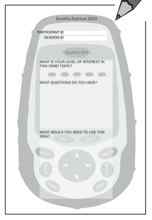 The crafty thing was asking participants to submit one of these paper-based feedback forms for each session they attended. Since we had a database of online registration, and each session was loaded as another database table, we only needed them to write down their unique user ID (printed on their name tag) and session ID (printed in the program and on signs), and respond to 3 questions:

The incentive was these were used for drawing the door prizes, a real GPS unit, and a 20 GB iPod (thanks to Bob from Apple!).

Maybe it was the iPod lust, but we collected almost 780 response forms.!!! Our student worker Julia typed these up into an Excel spreadsheet, which can then be sucked right into the mySQL table. You can browse these from the area we set up to see the responses summarized by session which just in that provides useful information to presenters. For example, we had 75 responses for the opening keynote by Richard Baraniuk.

The fast and furious (and typo prone) programming the last few days was to create a system for the session presenters and our Ocotillo leaders to log into so they can not only review the FPS feedback responses, but to select them in groups or singly, and enter specific feedback intended for the person that submitted the GPS form: 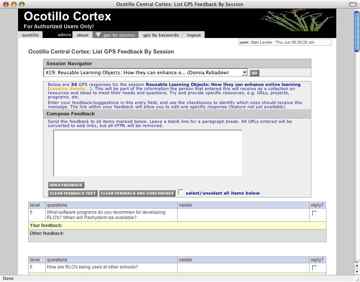 They can bring up all the GPS forms for a specific session (shown above) or also do keyword searches to collect them in a page. It shows the responses from the person using the tool, in the yellow boxes, and responses from everyone else in the grey boxes. The interface was a challenge, and will be for longer pages where there are lots of feedback. I had some grand plans to do some Ajax magic and do in page editing a la flickr, but ran short on time. By allowing the same feedback to be sent to multiple GPS submissions should save some time. In theory.

The idea is to collect all of the suggestions and ideas that answer the questions submitted by the retreat participant. By August, when our faculty return, we will issue another script that emails them individually with instructions on how to access their personalized feedback. The idea, using the GPS theme of being “lost in technology” was to submit some waypoints, and our folks are giving them back a more detailed, though not “complete” map of the terrain.

Well, that in theory is what happens. It all hinges on if anyone other than me can use this interface.