Not everyone can afford Camtasia and screencast like a pro. And it is PeeCee only.

There are other ways to do simple presentations of how to do tasks on a computer. Someone named “djweinstein” has done some elegant tutorials on how to do things in Audacity, by posting them as a flickr set, which can then be viewed as a slideshow- here is a snapshot from time shift— a tutorial that “illustrates a technique for sequencing audio tracks using Audacity’s time shift tool.” 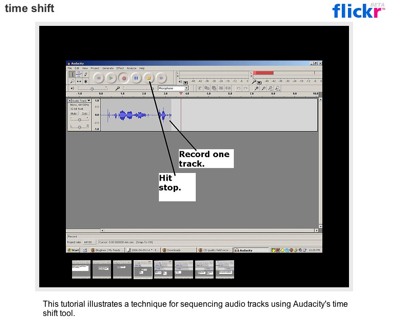 Also in the mix is another one on Audacity Tutorial (Amplification/Normalization).

It would appear to be as simple as to outline the list of steps in a process, do a screen shot for each, edit each image with some overlay text, upload in flickr, and arrange in a slide set.

tip of the blog hat to Dean Shareski