PowerPoint is 2.0-fied with SlideShare

It has been a few weeks since I looked at slideshare, and today uncovered some things that likely were always there.

I am swiping the notion from Bryan Alexander’s vocabulary in terms of talking about “microcontent” — each slide in an uploaded PowerPoint, that gets convetreted to Flash, is addressable as a URL. This is big, but means you can direct link to a specified slide in any show:

it is a matter of taking the URl for any slideshow presentation… say, http://slideshare.net/cogdog/talking-about-rss/ and just appending the number of the slide you want to link to say, slide 7.

If those shideshare folks are listening, what might be cool is a way to bookmark or favorite a specific screen, and then have a tool to create mashup from different shows!

I learned that by looking at the show I posted from our NMC Regional Conference — it says there are 3 comments, but on the first screen, I only saw one… then I saw the little commented slide links below which show that in slideshare, you attach comments to specific screens (example)! Microcontent feedback, woooooo! 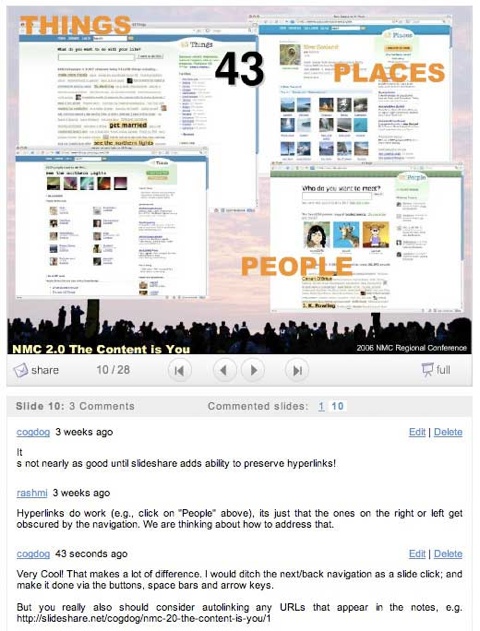 And their developers are on top of feedback! as noted in my slide 10. And it appears they have added (or I just plain missed) that if you create a hypertext link in PowerPoint, these are preseved in the slideshare version; it just can get obscured by their overlay for next/previous slide navigation (I say take thhose off the content area and leave for buttons and keyboard navigation).

A big tail wag for slideshare!