My current report card might read, “Alan needs to improve his attention and focus at professional conferences, and perhaps work on a more positive attitude”

On the heels of the 2008 ELI EDUCAUSE annual conference in San Antonio, it’s time to reflect once again on the conference experience. Be reminded, this is my own take, and should be taken with a house sized grain of salt (or on the rocks, with lots of tequila).

My most long standing barking threads has been the staleness of the professional conference format. This goes way back to the 1990s with all those sessions with an expert standing at a lectern, speaking to a passive audience constrained in rows of seats, that we need to MAKE A CHANGE in education, and the horribly trite phrase of “the sage on the stage becomes the guide on the side”.

The audience would nod in anticipation of hearing how this might happen.

Then, Dr Expert would ask for the lights to be dimmed as he moved into reading his slides to us.

This happened to me many times. 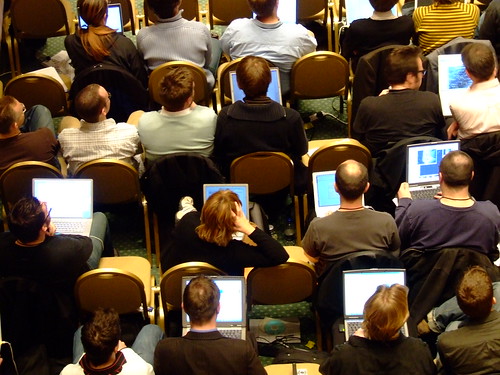 This was before the audience had access to the net for allowing them to at leas do something engaging or constructive or just mind soothing during the infliction of the lecture. Then, at some big conferences, I could just not figure out why thousands of people would fly to Denver, lodge in some generic gold and yellow hotel, suffer conference chicken— to sit in a crowded hallway and read email? I was stymied.

It was torture and nothing much really changed.

Yes, we do have a few unconferences happening, we have online conferences, we have ______ camps. But these are, in sum, small outliers- the bulk of our professional gatherings are still constructed on the old reliable foundation of a series of 50 minute lectures. Has there been a large scale eduCamp? I am sure a few… but out of the total of all gatherings?

And hopefully there is a query from the back of the blog, “Well Mr Complainer, if you dislike it so much, what is your idea how to do this better?”

And I shrug and continue to say, “That is an excellent question! I am so glad you asked it, because I am still ruminating and doing some experimentation on this, and will report on it next year.” e.g. I have no freakin idea.

So with that, I do want to flip on my positive attitude and commend the folks at EDUCAUSE for continuing to try new approaches on the edges of the traditional conference. First of all, the wireless connectivity they provided was outstanding, never went down (obviously it did not originate from the Hyatt, who according to Alexander’s Law of Worsening Net Connectivity Correlating With Increasing Hotel Rates… was sucky.

EDUCAUSE has gone to online session evaluations, a drum I have been banging myself with NMC. When you get this paper ones at the end of the session, we all feel obliged to circle a few numbers, and scribble a “great session” in unreadable text. People are to rushed at the end of a session to provide much meaningful feedback, and we do it only because it means we can say we do evaluation. I think the stuff you get back from this is a waste of paper. But then again, I realize that fewer will take the effort to do this later (I am one) so its still a losing battle or a bunch of time graphing meaningless numbers.

They also set up the “Learning Circle” sessions which are small group discussions- I roamed, and it each room, at the end of a long Tuesday, I saw something like 4 groups of 10-15 people in discussion. There was note taking posted right to wikis or google docs.

And another plus is that EDUCAUSE sprints to post the session audio as podcasts in 24 hours, and had live streaming audio and archives posted from the main sessions in an amazingly short time frame.

So I want to say to EDUCAUSE, Yay for trying.

This conference was a challenge as there were often 3 sessions at a time fighting for my attention. I told a few people maybe we should just have a conference with all keynotes, but that too is not very workable.

The biggest, and most exciting component of this conference was a fantastic flow of conference twittering, and it was more rich than any set of chat backchannels because it crossed many streams at the same time– one could get a sense as to what was happening, important in the sessions you were NOT in (and make for some self criticism for ,”why did I choose THIS session??)

So it was very active among people who were at the conference, but there was this wonderful secondary interaction of connecting with colleagues from afar- most telling when Nick Noakes in Hong Kong was listening in via audio provided by Cyprien Lomas broadcasting the audio through a Skype connection. This is the spontaneous form of action I found more exciting than a comfy Herman Miller chair. 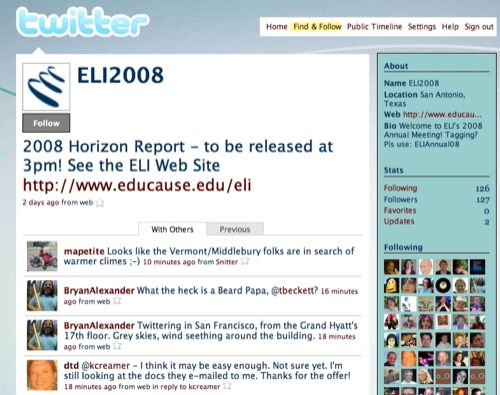 And ELI had setup a twitter event account, following to those at the conference who were twittering, and had this displayed on a big wide screen. I witnessed many attendees seeing this for the first time, asking about it, signing up for new accounts. So the twittersphere just get more broad (though it seems strained with a series of outages and those confounded, “Something is technically wrong” screens).

In spite of this, I think we always need more conference blogging, but not necessarily the live note taking one conjures when I say this. No, I am looking for the more reflective and summary type writing (the kind, I have yet to do) that makes for a more permanent record that twitter.

But I still maintain we need some more alternative formats to our mid and large sized professional gatherings than concurrent lectures. If I am listening, in person, to something I can read or hear online, what is the value? So maybe it is not even the format that needs a shakeup, but what we *do* in those sessions. A most elegant form was by the team of Laura Blankenship, Martha Burtis, Barbara Ganley, Leslie Madsen-Brooks, and Barbara Sawhill on session on Fear 2.0 where we had some powerful videos, small group discussion (with low tech sticky notes) and the whole energy of the room gets up-ended and moves it above the flatline I feel in most sessions.

Bottom line, if you are telling me stuff I can on the web or from an electronic resource, we are wasting both of our time and energies. It is time… do be different in our professional communication. Maybe rather than just talking about things, we can create something. Get out of the academic power talk mode, and get your audiences involved. Or be provocative and stir up dissent or counter talk.

Stir up the stew.