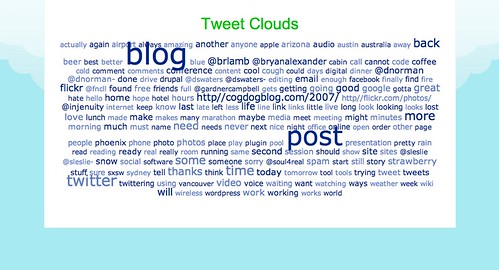 I was intrigued when the Good Doctor Bryan Alexander blogged his discovery of a twitter cloud tool.

Tweetclouds generates this once granted your tiwtter user name.

I wanted one! Bryan has one!

But when I tried (several times) all I got were blanks. No clouds. No tags.

Get off of My Twitter Cloud? Each time I try www.tweetclouds.com/ I get blank. Jealous of @BryanAlexander and his cloud

and in less than an hour, the creator of TweetClouds, John Krutch heard me and replied:

But hey John, I only have about 3000! Before I could even reply, he bounced back:

@cogdog looking at your profile though you do not have more than that. Looks like i have some debugging to do.

Well I just got a direct message from John:

and he provide the link so I could get the image above.

Now this may sounds just like gee-wiz isn’t the net neat, but the notion of putting out a request and people responding with not just like form mail ‘Thank you for submitting your feedback, someone from Acme Software will respond to you in 3-4 business days" — but a real human, and useful, quick response like John did… and it was not even me making a direct request! He is out there listening.

Someone ought to be rolling this into some sort of motivational speech machine and do the lecture circuit. Slap a 2.0 on it and charge $1000 bucks a head to tell ’em how to ride the cluetrain.

If you have not had one of these quick twitter give backs, just keep putting the questions, requests out there. Give, ask, tweet, get back. Being there, for sure.