For the 10 gazillionth time the network (as in the people I am connected to) saves the day again. For some upcoming presentations and conferences, I was hoping to set up TwitterCamp, a desktop app (Mac and PC) that runs in Adobe Air and displays in near real time the incoming tweets for a specific account. It is elegant, and very suitable for setting up as self-running apps on big shiny plasma screens at conferences.

The problem was that the version I had and last linked from the original site, was done in a much earlier version of Air, and did not run in the latest version, even after installing the older run time. Some comments on the TwitterCamp site hinted at newer code, but no links worked.

What else to do, except toss out a tweet and say, “help!”.

And Andy Rush came through (actually twice as I missed his first tweetback) with a link to a new version of TwitterCamp on the Google Code site.

And just ran it smoothly this morning: 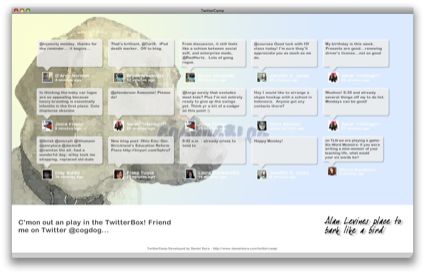 So to do this, the steps should be:

To customize the skin, you can follow the same instructions I posted July 2007 noting on Mac OSX you have to ctrl-click on the TwitterCamp app and select Show Package Contents. The 4 graphics you can customize are in the /Resources/skins directory.

I did notice the new version does not come with the config.xml file that allows you to change the default instruction text, but I simply copied the old one into the /Resources directory and it worked (there must be a default string coded). You can simply create this file yourself in a text editor, mine looks like:

and you should be off with a custom TwitterCamp!

Thanks again Andy, you saved me again…