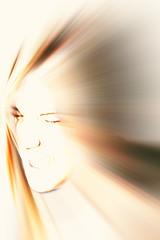 The rush of new technologies is not quite so different from this image, appropriately titled Armageddon. Among my cloud or network, are colleagues wiping out and restarting their social networks, jumping away from twitter to avoid mcirothinking or just hating twitter, or just pulling in the reigns from every possible social network tossed at them.

I feel this same sensation on a periodic basis, be it a blog funk, or that general sit and pause wondering, WTF am I doing does this stuff really matter? And yes, quite often my head feels like it is exploding. Or I am drowning in open web 2.0 water. The mantra I have used is in the sense of “Being There” is to face the future with a wide eyed sense of wonder, even when it is staring directly into a firehose.

That’s easy to spout off standing in front of an audience with a cool image slide behind you. It’s another looking at overflowing unread RSS reader items, more invites to social network than you can even keep them organized in your taxed brain, not to mention prying time to even do the work you are paid for.

So I am lacking an easy answer beyond shrugging it off, unplugging, letting stuff slide, or just floating along til the groove returns. I am reflecting though on questions about how much “power” we acquiesce to technology tools- twitter by itself does not force us to ignore other outlets or think in bite sized nuggets, nor do other social networks by themselves draw us in like some gateway drug to some zombie induced web coma– somewhere along the lines we make choices to get subsumed (my hand is raised in a “me too” formation). Some however may argue it is close to addiction behavior– so how much are technologies responsible? I dunno, I am fishing wildly for ideas, push back, etc.

On the other hand, if some of the most sharp and clever people I know and respect find themselves overly immersed in something like twitter, what does that portend for the many more people who look to them for guides?

I propose no answers, but have heard more than a few people communicate a yearning for a healthy balance in online/offline lives. So is Web 2.0 a seductress who sneakily draws us in a stupor to their smoky dens or do we walk willing through the door? Maybe its time to revisit the Twitter Life Cycle Curve for dips, crevasses, or even sinkholes.

Hmm, in trying to find that last link in google, OMG, I am number one for search on twitter life cycle! Poof! Adrenaline rush! I am falling back into the purple haze….