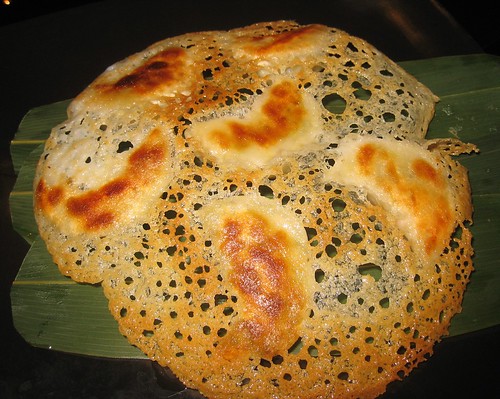 It’s been a whirlwind week for my first visit to Shanghai (an Asia while I am at it) to participate and speak at the Learning 2.008 Conference at the Shanghai Community International School. The blogging has been light because (a) I’ve had more fun taking photos; (b) it was a busy 2.5 days of full on conference activity; and (c) and I seem to have come down with another travel induced variant of the CogDogWog that had me a year ago coughing like a barking dog across Australia.

So like some of the scrumptious chinese meals we’ve had, like last night,.where dish after dish of steamed dumplings, stir fried meat, exotically prepared vegetables are plopped onto a giant lazy susan, here are a few random dishes of impressions from being Shanghai’d for a week. 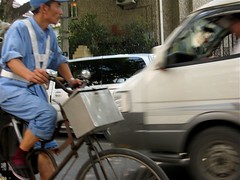 The race of cars, bicycles, scooters in the streets is just an amazing procession. I love watching the crazy chaotic flow, the daredevil moves, when some guy smoking a cigarette on a scooter laden with pipe waves to you inside the taxicab, is just a reminder of the flow of life in this city.

The range of contrasts here is staggering; in ultra modern shiny skyscrapers looming over wobbly tenements, the bright western stores versus the small stalls just around the corner, smiling happy kids and beggars in the street with babies on the sidewalk… its staggering. 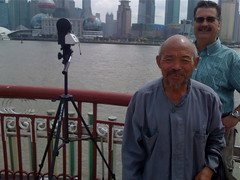 Then there are the amazing faces one sees here; old, yound, sad, happy, deeply engrossed in discussion, tired, worn, shifty.. everything. A real treat was walking the park across the way and seeing people doing all kidns of exercises, stretches, tai chi, taking care of their prize birds, playing fast badminton without a net…. 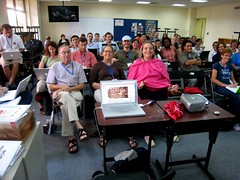 International School teachers are a fascinating, vibrant set of digital citizens; forsaking the norms of western life to teach in places like New Delhi, Saigon, Bangkok. It was fun to see them struggle to answer the question, “So where are you from?” as it has many layers. Living far from family, they are really wired in terms of communication technologies, but seem to struggle like teachers all over with how to integrate the flood of new technologies in their teaching.

If you are looking to get some adventure, to see the world, and from what I have heard, to bank some serious money in savings (they typically having living expenses paid for), these school are hungry for teachers. I find myself regretting I never took up the travel bug when I was in my 20s, but then again, its not always a young person’s world; there are plenty here who have made a life of seeing/teaching the world.

Internet connectivity here is a real dice roll. It goes from okay to a standstill, and sties often need to be multiply reloaded or given up on. Wikis seems hard to get to, but I was happy flickr seemed open. The staff at the hosting school performed a heroic task to re-align their bandwidth from multiple schools, and the audience of 500+ must have taxed the capabilities. Then we were told that the school had actually put a bunch of generators in action when the electricity was suddenly cut one day (this seems to be nothing unusual). 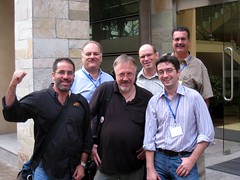 How off yet wonderful it was to have to go around the world to meet for the first time great teacher/educators like David Jakes, David Warlick, Clarence Fisher, Ewan McIntosh, and Brian Crosby. And we really missed you, Sheryl Nusbaum-Beach, who had some unexpected health challenges which prevented her travel here.

I was able to shoot 3 gigapan scenes, one on the busy commercial area of Nanjiing Street, a look across the river from the Bund to the skyscrapers of Pudong, and one

During the conference I had fun with my three sessions; there was Telling Stories with Photos on the Cave Wall, and always, people liked the 50+ Web2.0 Ways to Tell a Story, and seemed to enjoy the 5 card photo story tool I cobbled together. I am hoping to sometime soon package up the code as open source to share. And at least one woman I spoke to goot hooked on 5 Card Nancy.

It was also fun to do a demo and hear the interest in the GigaPan rig on my session on Creating and Exploring Big Wide Images– and folks were eager to play around in the final image and appear multiple times.

And I was pleased to get a big participatory crowd in discussion on my session on the Horizon report and we had some notes captured on the presentation wiki.

The other fun part was the opening session where the guest presenters were asked to do “inspirational” 10 minute talks in TED style. I had fun doing a bit of recycled material with my “Internet is Big” and stories of some of the unlikely connections that have come my way. Fortunately it was ustreamed and recorded:

Maybe fortunately! I’ve not seen the video yet (way too slow here).

I very much enjoyed the conference format style, mixing things up with unconference sessions, and how much you saw people sitting around at all times engaged in conversation. 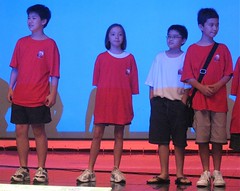 And it was a lot of fun to see how the organizers involved the school kids as tech support, the “Geek Squad” made of both high school and middle aged kids running around in their red shirts to provide suppoty and emergency equipment deliveries.

And while I can feel rather “ning-ed” out at times, as a platform, the conference site worked great to be dynamic, media rich, and a lot of people were actively posting notes.

So I have one more hazy afternoon left in Shanghai, headed out soon for some sightseeing with David Jakes and Brian Crosby, and then tomorrow it is on to leg 2 of the CogDogBlog Asia 2008 Tour with a stop in Hong Kong.