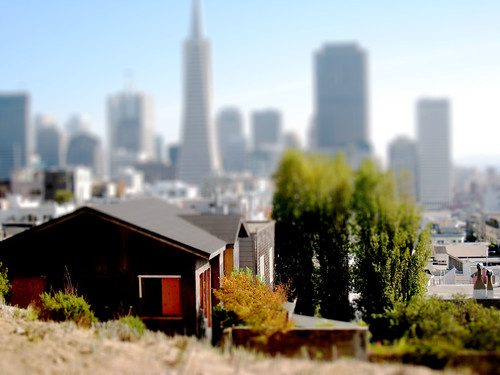 Inspired by a link from kotke to the Fenway Park "Model", I experimented with the Fake Model method. Essentially it is a PhotoShop play of careful gradient selection and lens blur to create effects that convert real photos to images that look like miniature models or train set models.

I was more curious to see how hard it was to create one of these- the lens blur filter in PhotoShop gives the short depth of field that a macro lens would make on a real model, and some toying with color curves is supposed to make it pop more like a plastic model.

Again, according to the site with the instructions:

With a very little effort, you can take existing photographs of everyday scenes and make it look like they’re actually of miniature models. It doesn’t take much to fool the mind of the viewer, but there are a few basic rules you can follow to help convince your audience that they’re looking at a railway set rather than the real world; see the section on picking the right photo at the bottom of this page.

I toyed with two more tilt-shift attempts- a Golden Gate Bridge shot and one from a street scene in Shanghai.

I found that I had to inverse the selection method described in the article to get the right selection… or maybe I just followed the directions wrong.

The Fenway one by B Tal that caught my eye really demonstrates the effect well-again; this started as a regular photo: 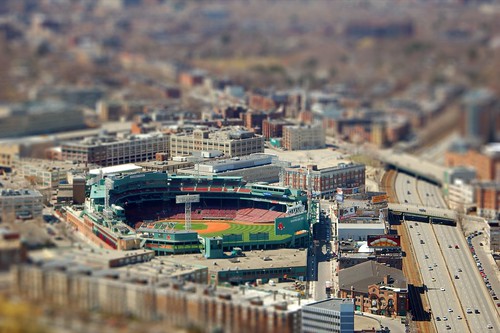 I have no real idea what use this is, but fun to dabble with some PhotoShop chops (does anyone remember the days of Channel Operations?)

There is a “small” tilt-shift flickr group going to share these in 5600+ members and nearly 15,000 tilt-shift photos shared.

UPDATE By morning my flickr photos got me invited to another Tilt-Shift groups in flickr Miniature Sunday – HMS! 26 Members “Happy Miniature Sunday (HMS!!) Post your Tilt-Shift Miniature Fake photos here every Sunday. This is a new group, enjoy!! Contests coming soon!!” plus their site has another link to a how to tutorial with a few extra tips form Visual Photo Guide.

And in the comments below, Carl Berger suggests the Picnik editor connected into Flickr has a tool to get almost the same effect.