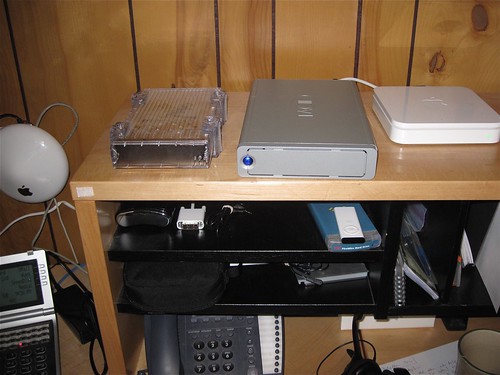 Last night I re-wired my home network with a new Apple Airport Extreme — an 802.11n speed network hub, it is then hard wired to my older Airport (left) which serves the premises 802.11b/g speeds for the iPhone and guests (if you all devices running 802.11b/g to use the new Airport, it slows the speed down, so the new one is for n speed devices only- my laptop).

Also new is the LaCie 2 Tb drive next to the Airport Extreme– it is connected to the Airport via a USB hub (so my printer is on the wireless as well) with a plan I can run Time Machine over the high speed n connection. swith 3 LAN ports on the new Airport and one on the old, I no longer need my NetGear switch (I have ethernet to my PC, a backup hard wire for the laptop, and one for a VOIP phone)

My old 400 Gb drive (left) got toasted and I am praying Disk Warrior can pull some magic out of it.

The new Airport alone is a lot faster than my previous setup which had my cable modem running through the NetGear switch, which I think means all of the DHCP action was going back to my ISP. With the new Airpoer Extreme being downstream from the cable modem, the DHCP is now being done locally, and everything is being the built in firewall.

I got some ideas for the dual airport setup from an article on AppleInsider that gave me the idea of having a “fast lane” network and a slower one for the older devices and iPhone, plus how to configure the new Airport Extreme for making best use of the 5 GHz band.

Here is a schematic of the new setup (done in gliffy, click image below for full size or see on gliffy): 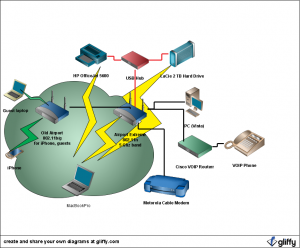 There was an issue when I first tried to find the new Hard Drive in Time Machine- it did not appear! I found the answer from an post at Morph8 a Terminal command line to make the drive visible (this is all one line)

But it took about 12 hours for Time Machine to do its first backup of 102 Gb — part of this was user error as for the first three hours I was connected to the network on my older airport, and then I was probably making things slower by being online all day.

The other unexpected result was that on the wireless connected hard drive, the Time Machine files are stored in a disk image format– I am hoping that is not a problem as the thing grows. Might have to research this one.

But now Time Machine is doing its hourly incremental backups, so I am much better covered then before when I only updated when I remembered to plug in the external drive (which got full anyhow).

And printing across wireless is just fantastic. The only downside is that the HP Scanner software cannot locate the HP device via wireless. 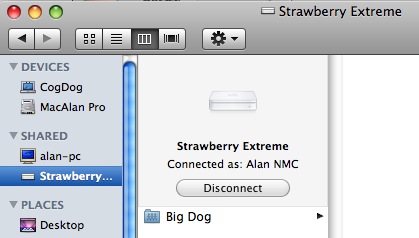 The new LaCie 2 TB “Big Dog” drive is visible as a shared device, as is, in theory, my PC.

And.. now my PC is visible as a shared drive, and as soon as I figure out the bizarre vista file sharing, moving files should be easy.

UPDATE: (Jan 7, 2008) After all this I have taken the Big Dog drive off of the wireless network. It was worth the experiment. If all I was doing was Time Machine back up, it would work fine– it is the first write that is time consuming because it is copying everything, but beyond that, the backups are smaller and barely noticeable. However my problem is I am using the same drive as an archive of old project and media files (things taken off my main work machine) and even basic copy time was too slow over the wireless.

So I have taken the 2 Gb drive off the Extreme and have it connected, when I am working near it, by Firewire 800, and copying from other drives is lightning fast.

With my 400 Gb drive on the fritz, I just purchased a 750Gb LaCie from Amazon; the prices are just amazing if you go back in time at all. This drive is mainly for my personal media, and the long delayed project of putting on disc all the photos that are sitting in a plastic box in my closet on about 200 CDs and DVDs.