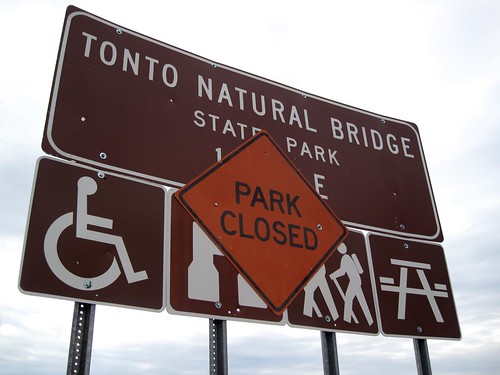 Hmmm, I’ve been waiting for a local cause and here it is. The far seeing Arizona state legislature has slashed $35 million from state parks, which are closing like falling dominoes across the state.

Tonto Natural Bridge State Park is just south of Pine, AZ, about 6 miles from where I live. It features what is called the largest travertine natural bridge (a natural bridge being like an arch, but over flowing water). The "hole" is more than 180 feet high.

According to an article in the Payson Roundup, this little park drew 100,00 visitors last year, and with a raise on fees from $3 to $4 the park is self supporting.

The estimated local economic impact of visitors coming to the park is $3.5 million.

Oh, it makes sense to take that away from the marginal local economies. Already in the small towns of Pine and Payson, at least 2 restaurants are boarded up. That puts a handful of people out of work, and then they are not putting money into the local economy, which has the effect of… spreading the slide.

To me, the staggering stupidity of closing a park like this is much deeper then the grand canyon. Hopefully some of the dusty heads in Phoenix will get a clue.

There was some sort of town hall on this issue in Payson today; I could not get down there in time due to appointments.

I realize and accept the hard decisions facing the state, but this one just feels stupid to close a state park that pays for itself. Heck raise the entrance fee to $10 and I’ll be okay if it keeps parks open.

Closing parks is not only dumb, its gonna put a big belly punch in marginal local economies.