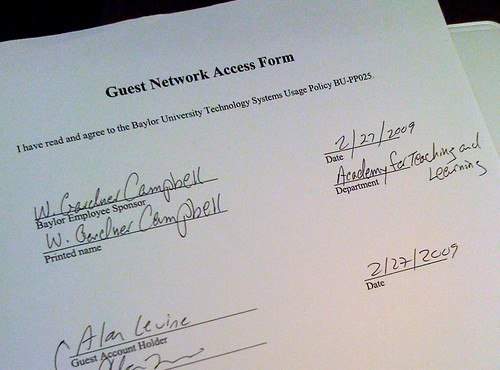 In valiant attempts to get campus wireless access for me at Baylor, Gardner went to the extremes to work the channels.

I had to provide my home address, phone number, forms were faxed, we went to the IT office, phone calls were made to various corners of the IT org chart, I showed by driver’s license and signed more forms…. and the system would still not authenticate the credentials they provided. I offered a pint of blood and my grandmother’s maiden name, to no avail.

It may sound like it, but am not b***ing. A woman in the IT office was very gracious, apologetic and tried everything she could (as a relayer of paperwork).

But come on, network access should never be such a hurdle, should it? Almost every commercial access point can figure out who I am (and take my money) online. Academic networks that require faxes and paperwork are in the wrong century.

I could not resist sharing with Gardner the irony of what Alexander Hayes dug up from his own archives– the official Australian paperwork for an application to innovate. That’s right- fill in the boxes, sign, date, and submit the papers and you may be able to innovate.

So what’s your most ridiculous paperwork (beside tax forms)?