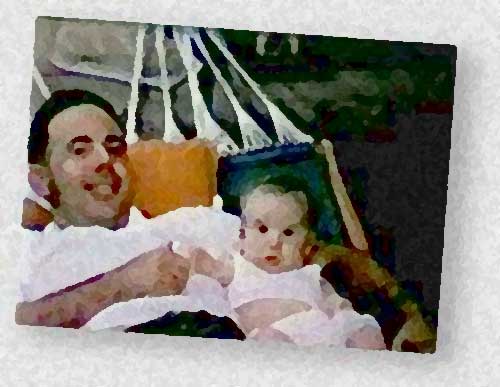 It’s been 8 years since I have been able to say directly “Happy Father’s Day”, and 2001 was not the best one as Dad was in the middle of his 6 month bout with cancer. For a man who had some many names/nicknames– “Morris”, “Mike”, “Mickey”, “Blackie”– by any other name mattered not for the man I knew as Dad.

A man who was not one for saying a lot in spoken words, he was almost a different person in the written form (those old fashioned things called “letters”), one thing was always sure is how proud he was of me and how much support he gave me for whatever choices I made in life, even the ones he did not understand. That kind of un-conditional love is the hallmark of Dad-dom.

From his tribute I created after his death in August 2001, I never tire of the old 8mm video clips of him holding me as an early alpha version of Alan- he of course is silent except for the mouthing of “Say Cheese” and his big smile:

It’s not surprising that the memories come and go in vividness, and today is an obvious one for them to flood back, and I can hear his voice in our phone conversations, “Take care, Junior” as he used to call me, which I would bounce back, “Same to you, Senior” or sometimes tossing in an “Old Man”.