I was thumbing through the current issue of Wired Magazine (yes, my analog, arrived in snail mail, maybe delivered by Pony Express version). In very small print on the table of contents, under “New Media” was an interesting note. 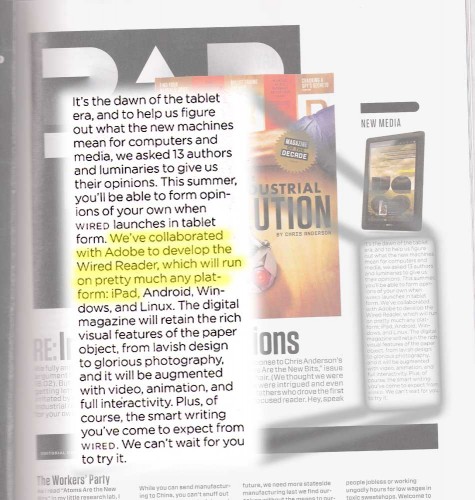 We’ve collaborated with Adobe to develop the Wired Reader, which will run on pretty much any platform: iPad, Android, Windows, and Linux.

Woah, working with Adobe to make something run on an iPad? How in the blazing “no flash shalt ever be installed in thy iDevice” can that happen? Might Adobe be looking past Flash?

Hardly, and this is not really new news.

It was announced February 2010 at TED and there is a slick “demo” published on the Wired site “The Wired Tablet App: A Video Demonstration”

Last week Jeremy Clark from Adobe and I unveiled the first glimpse of the Wired Reader at TED. Above, you’ll see a video, narrated by Jeremy and Wired Creative Director Scott Dadich, who led our tablet team, that shows more. It explains why the tablet is such a groundbreaking opportunity for magazines such as ours.

What Jeremy and I showed was not a CGI demo or concept “” it was running live code with real copy. The content was created in Adobe InDesign, as is the case for the print magazine, with the same designers adding interactive elements, from photo galleries and video to animations, along with adapting the designs so it looks great in both portrait and landscape orientation. This is a departure from the usual web model, where a different team repurposes magazine content into HTML, unavoidably losing much of the visual context in the process. Wired.com is not a re-purposed version of the magazine, but rather an separately-produced news service.

Looks rather slick, indeed, though some sources like Monday Signal: Oh, the Irony of the Wired “iPad App” the description as a true demo, for some, seem stretched:

However, the truth is this: This demo was made using Adobe software (not available in native runtime on the iPad) and run off a Dell laptop. I’ve confirmed this with Adobe. Also true: the software used to create the demo will absolutely NOT create or compile apps that work natively on the iPad. And this is due to decisions made by Apple. Yes, there is a kludgy workaround that Adobe has authored, but it’s handicapped, to say the least. As much as the Apple would like to claim it has banned Adobe for technical reasons, by all accounts outside of Cupertino, Apple has banned Adobe due to control and economic issues: It simply doesn’t want developers able to create software from which Apple won’t profit.

I dont really care about the minutiae details of Apple vs Adobe or this versus that. It’s just an interesting episode to play out.

I have to say, the demo on the video does look interesting, yet I see marginal “newness” in this “new media”.. it stil feels like a magazine on a “reader” is still pretty much the vestigal print archetype, with some media and navigation thrown in. I see little newness in the idea of what a magazine could/should/might be.

This is incrementalism. It’s also weird, to me, that Wired’s whole framing is in the vein of “tablets” which feels old to me as a name– the cover issue title is “Rise of the Machines- How Tablets will Change the World”.

But I’ve not read the issue yet, so maybe I should reserve judgment. Yes, I am going to use my Paper Reader, taking advantage of the swiping page turning technology I can use by gripping the pages by the corners and moving them, and the jogger bar navigation where I can jump to any page in the issue.

What I’ve not seen in the New Snazzy Wired Reader is how they will embed the digital equivalent of all those paper wasting subscription card inserts, the letters in the mail I get 8 months before my subscription expired warning me I am in dire danger of missing an issue, and of course- the digital versions of the ads, ads, and ads.