While Twitter is all about “what are you doing now” it is mostly useless to try and find out “what I did last month”. The search capability feels more like pulling a slot machine handle in terms of feeling like you will hit a jackpot.

The Library of Congress cannot move fast enough for me.

Here is my case example. In an email exchange at work, the nifty web app notebook.cc came up. I knew I had played around with it sometime recently. I could not find a blog post here, so I went to the twitter search (advanced searched on tweets by me and “notepad.cc”)

However, I did not buy those results. I knew I tweeted it, damn you finicky bird!

So next step? Go to the Oracle. I googled on @cogdog notepad.cc and found mentions, references to it, and eventually got there because luckily @karlyb had favorited it. 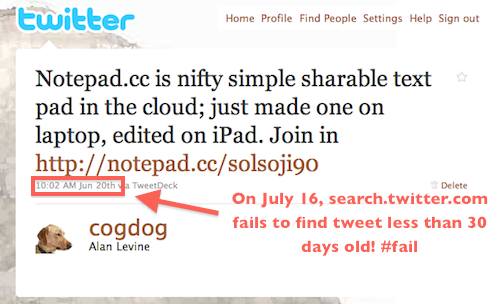 Twitter search therefore is not really a search- I do not even know what to call something that does not even index its own content in a manner that is close to comprehensive. It might be interesting to do some experiments to find out how big these gaps are.

So what can you do? First, if you tweet something you may want to recall, maybe the answer is to favorite it. Google is always an option, as it seems to be indexing twitter in some amount (maybe twitter is hoping for the Google-Buy-Me dream?)

I’m going one better, I just set up a twapper keeper @person archive, which archives your own tweets — http://twapperkeeper.com/person/cogdog. This service is becoming more and more powerful for my work; I’m looking next at making an archive of archives for our NMC content. Again its case of a third party well executing something the primary party is not doing. That is one gain my the primary party (twitter) at least providing the APIs for others to fill their gaps.

I also have backupify running on my twitter account, but have yet to go peek in there.

Got any other solutions to better track your tweets?

But wake up, Twitter Search is not something you want to ride in to the prom 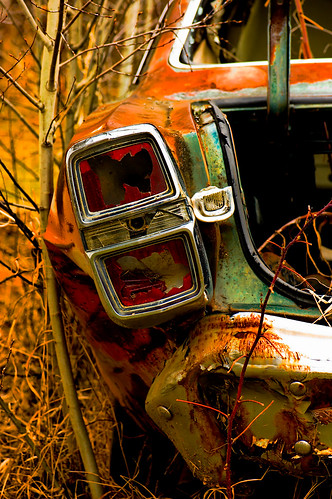 And i should add that if you use a twitter widget to put the tweets for your event tag on your web site, you can count on the stream going dry a few weeks after. My current strategy for events is to (1) create a twapper keeper archive ahead of time; (2) use a twitter widget during and a few weeks after the event; (3) later replace the widget with a link to the twapperkeeper archive.

As a sideline, I find that Google gives a lot of false hits on my blog, because I have… er had.. been using the twittertools plugin widget to insert my tweets on the sidebar. What this means is that Google is indexing content (the tweet stream) at the time of indexing that has nothing to do with the content on my blog post. I slapped that widget off the screen.