We’re trying out a new strategy/approach/technology for our communication via twitter for NMC. Up to know, for an organization, we have the typical approach of having an “official” account @newmediac (Neil M. Cameron got there first – you have to roll with that; my thinking of “newmediac” = new media + maniac).

For our twitter account I use Twitter Tools in our WordPress sites and TwitterFeed for our drupal site to push certain content out. I’ve also set it up with HootSuite to provide a way for other NMC staff to send messages out (HootSuite allows us to do this w/o sharing the account password and to schedule tweets, yes three are a number of other tools to do this).

This works, but it is an approach of having one entity to represent an organization. And this makes sense if you are a Big Giant Conglomerate with Postions Like Social Media Spokesperson or even a PR person.

But we are small, and the nebulous organization account pretty much masks the fact that we are a group of individuals.

So I’ve been experimenting with a new avenue, as suggested by Beth Kanter, called ConnectTweet 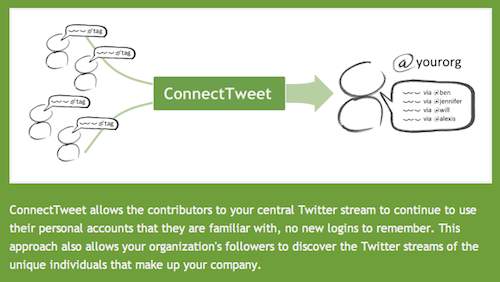 ConnectTweet allows the contributors to your central Twitter stream to continue to use their personal accounts that they are familiar with, no new logins to remember. This approach also allows your organization’s followers to discover the Twitter streams of the unique individuals that make up your company.

For example, I tested with this message (yes not all that original…):

and in a few minutes, automatically, @newmedic sends its own message via ConnectTweet:

I rather like this as our NMC staff can more easily, via their own twitter accounts, send a message that goes to a different channel of followers. 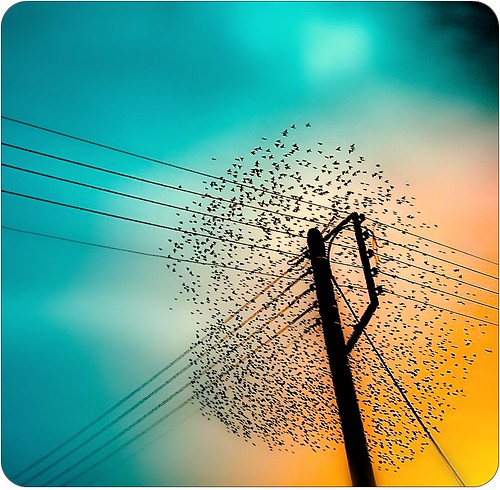 Or maybe you see it as spammy, re-tweeting yourself? i dont think so, but we are exploring it over the next few weeks.

I want to thank Ben Hedrington for giving us an early in to try ConnectTweet.