While I’m on the code doc kick… this one is not mine, but something I applied on my site.

A week or so ago I came across (from RSS feeds? nah, I think it was in twitter? maybe a squirrel stepped o my keyboard?) Steph Gray’s Reading: keeping on top of stuff I save, some code he rolled. The way he describes the need rang a resonant bell with me:

Like a lot of people, I use services like Google Reader, Twitter, Delicious and Instapaper to help me find and store interesting links to articles, tools, apps or whatever. Personally, when I don’t have time to read it right now, I tend to star an item in Google Reader, “˜favourite’ it in Twitter, or mark it to “˜Read later’ in Instapaper ““ often five or ten things a day. I also save interesting stuff to Delicious, particularly where I think it may have longer term usefulness.

But I hardly ever actually go back and read those things.

Mainly it’s because it’s a bit of a faff finding the links, and because the time I’d get to do it (on the train, hanging around waiting for a toddler to wake up, etc) I’ve generally only got an iPhone to hand.

Hence Reading. This is a little sliver of PHP and jQuery…

Steph’s nifty script consists of a single PHP script plus the SimplePie RSS parser and a JQuery library to make the interface accordion work. My setup is at http://cogdogblog.com/reading: 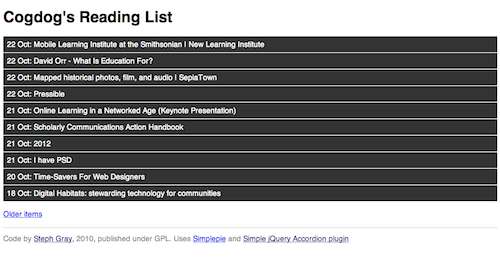 If you open any of the “accordion” items, you get a full version of the site: 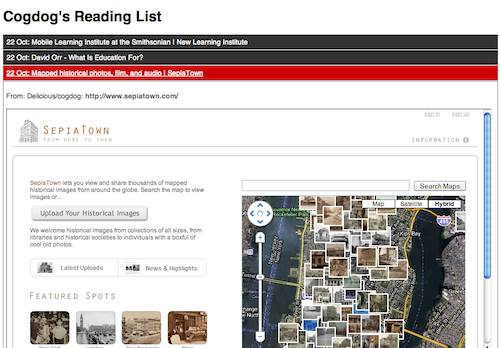 It’s something you cold implement without much code or PHP chops needed. In fact, all you need to edit is the line that lists the RSS feeds you want to use.

What it does is let you build your own list from all the RSS feeds for these sorts of things- your tags in delicious have a feed, your Google Reader shared (and starred) items have a feed, Instapaper has a feed- all you have to do is find them, and add them to the part of the code where you enter them in an array.

Delicious provides its RSS feed at the foot of most pages- you can do your entire stream, or create a special tag you want to use to designate items for this list. Instaper provides the feed somewhere in the account settings. You can get your Google Reader starred items via the Reader Settings – Folders and Tags (set the starred items to public, and you get a link for the RSS). Your shared reader items are set up in the Sharing Setup area.

Twitter does have a feed for your favorites, though it does not provide the link directly for you- I found the answer via twitterati, it is as simple as:

so my feed is http://twitter.com/favorites/cogdog.rss

What is also neat, or maybe neater, is that Step’s code has a mobile friendly version at the same URL- in this one, you get the same list, but the accordion opens to just a link to the site: 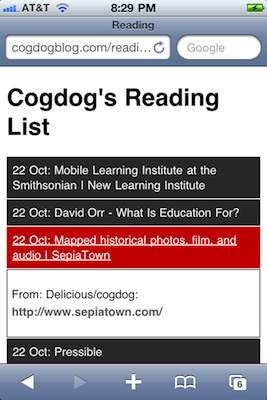 I have been doing a bit more of sharing in Google reader, especially when I am on the mobile version, and this is sure a better way of organizing then emailing links to myself (the same for twitter). I’ve not used Instapaper in eons, I keep forgetting about it.

Thanks Steph for sharing the code- again, you can get your own code from Steph’s site, and I see the plans for the next version are to make it so you can download all the items to a Google Spreadsheet.

What are you waiting for? Give it a try.