I’m cooking up a presentation for February I am calling (Not So Stupid) Browser Tricks – a ittle nod to Letterman’s shtick with pets. The premise is to show 10, maybe 12 things you can do with common web tools (or ones less well known) that do something, that, when you show someone else, would cause them to whistle and say, “coooooool”. Or something like that.

This one may not make the list, but there is vein of things that are possible when you can get a site that generates geolocated information in Google’s KML format (Keyhole Markup Language) (bonus points for those that know where the “K” came from).

One example that I played with before was getting a KML feed for your Foursquare checkin activity (not that I do that) (much) and make a google map of it in two steps. And that is where the trick is- if you can get a data set to produce KML, that URl can be pasted into the Google Maps search field, and the data gets mapped.

So it was sifting through my old delicious bookmarks (OMG can you believe it still works???) and found this 2007 post Flickr Photo Set to KML by Adam Franco that has a tool to convert the data from a flickr set to KML, that can then be used in Google Maps or Google Earth.

Of course, you need to start with a set of flickr photos that have locations added to them in flickr to begin with. I chose to test it with this set of images I made as my 2010 Year in Photos set – I had gone in earlier and added as many of them to the flickr map as I could. 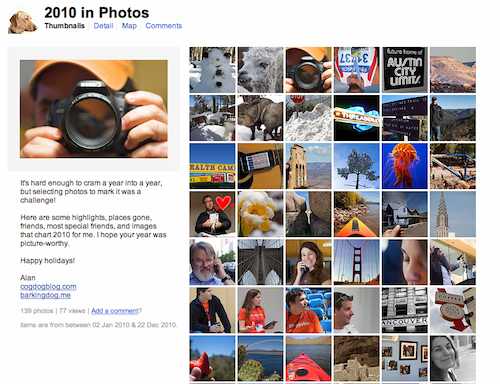 The other options I used were:

I generated that file, which was saved to my desktop, and then uploaded it to my web server (to be used in Google maps, the KML file needs to be at a public URL) – mine is at http://cogdogblog.com/hacks/2010-photos.kml.

Then all I needed to do (and you can do the same to generate the photo map) is to paste this URL into the Google Maps search field (and click Search).

Voila, my flickr photo set is now rendered on the map! 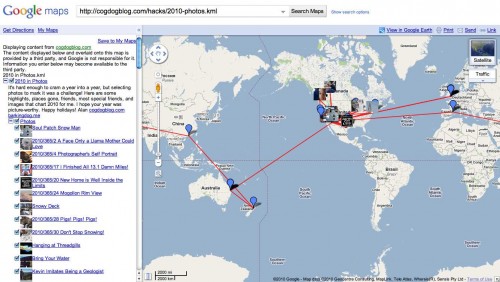 The nifty thing are the options on the left- it has the original description from the flickr set, and if I do not like the lines, I can uncheck its display box (down below the scroll fold).

Each map location has the image, caption, and appropriate links from flickr: 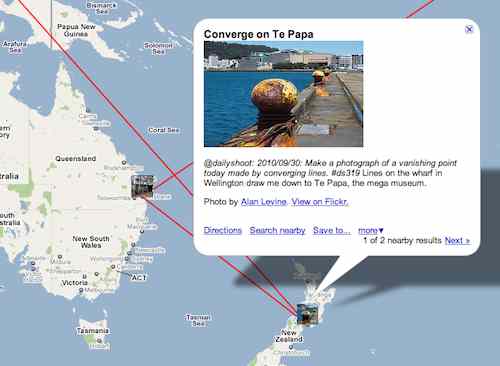 I could have just as easily put the same map data into Google Earth.

The places in the map that show as generic pins are apparently places where multiple photos are at a close location- for example zooming in on the pin over LOndon, reveals it is a cluster of five photos: 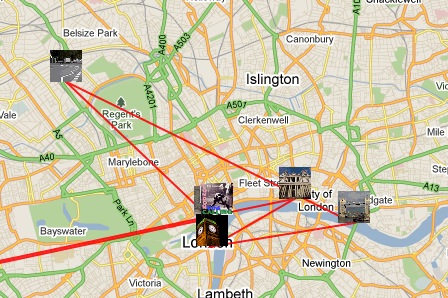 Now flickr itself offers an automatic map for the geocoded images in a set- this is the one for my photo set used above: 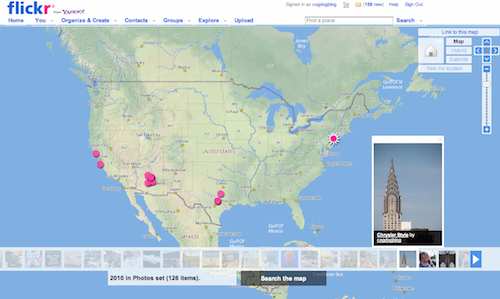 But it feels less functional- for one thing, the popups for the picture provide links that remove you from the map interface. The map is pretty, and I get the icon shortcuts on a strip below, but it does not feel as informational as the google one.

I was hoping that perhaps there were some more social media tools to try this out on- like it seemed like a twitter search that has the geolocation data clearly inside of it (sample), might have a way to convert it to KML. There are methods described how to convert data from spreadsheets to KML, so it is do-able… in Tony Hirst like theory.

Still, I think this as a nifty patching of data from one site to another. Not to say it has a clearly compelling use case, but its one of those things I find I play with as an experiment, and some day, the reason to use it may (or may not) appear.