I’m ambiholidayous– I’ll celebrate anything. While growing up in a Jewish home in Baltimore, we had Hannukah this time of year. At the same time, one of my Dad’s favorite activities was taking me for a walk in the neighborhood to see the decorated houses– ours never had the lights and doo-dads, but we liked to see how other people lit their homes up. 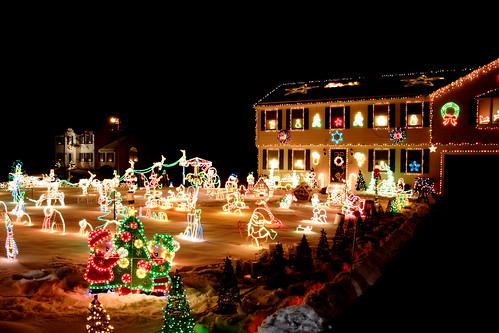 Our favorite was a house that actually had no lights- it was square, and white, and had a flat roof that sloped backward, and the family would drap this giant red bow down the front- and it looked like a giant wrapped present. We would also visit a friend of the family (I never did figure out the connection) but the Bentes would always have the brightly lit Christmas tree and snack food like steamed shrimp. They also thought it was fun to ask me if I wanted a shot of whiskey (I fell for it once).

Don’t ask me the significance there, I’m just rolling through the memory rolodex.

It was with my ex that I first got to celebrate a family Christmas from start to finish- and oh did I dive in. We were young cash strapped students, and I fondly remember spending Christmas eve building presents in her Mom’s garage. Later when we were married, it was me that was fired and ready to be up on the roof laying out a trees shaped pattern in lights. I always wanted to create elaborate ruses with gift wrapping, putting small things in giant boxes, wrapping electronics inside Corn Flake boxes, one year creating a series of treasure hunt clues to find the gifts hidden elsewhere in the house. We’d go to elaborate lengths (and arguments) to create the ultimate non traditional holiday letter. One year our rules for gift giving were that all gifts had to be used, they had to come from thrift stores (the kids hated that one).

I just like the festive parts, and the traditions, especially elaborate ones, so I’ll celebrate any holiday. While my Mom was visiting earlier this month, with its early landing date, in early December one evening we lit the Hannukah candles and then I went outside and hung the Christmas lights on my house.

And while I live and work online it seems, I do a pile of analog holiday cards, with hand written messages. For this year, I decided to share my favorite photo, so I assembled them as a flickr set, and included a one pager with a link — http://bit.ly/alan2010 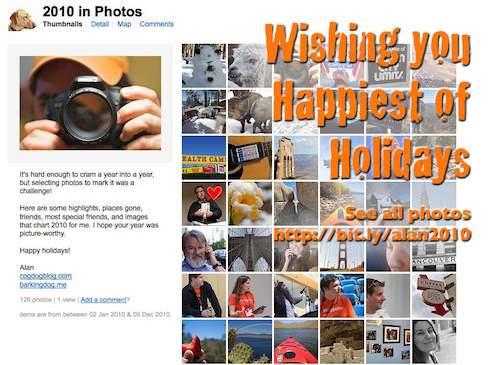 (Okay, I did run out of steam and sent a batch by email). It is always an interesting process to reflect on a year on pictures, these are not necessarily my best or favorites, but my favorite moments, places, and people.

For my family gifts, I opted out of sending “things” — everybody is in good places financially, and I was stretched to think what possible thing they might really need. That’s usually the challenge I like for gift buying, but this year I went in the opposite direction– I made donations in their names to causes I related to them. For my Mom, it was the hospice that took great care of my Dad back in 2001, for my friends coming over for dinner tomorrow, it was the Chihuahua rescue organization that they got their two dogs, for my sister who is a teacher and others, I gave them donations slips to use at DonorsChoose, so they get to pick a teacher or project to support, for my other sister who is living on her boat I donated to a school that teaches blind people how to sail.

So whatever holiday who celebrate and however you do it, it’s all good. I’ll take any and all of them myself, and count me in for the celebrations… well maybe. I heard from my friend in Iceland whose house I watched in 2008, and she described the traditional delicacy:

Christmas here in Iceland starts on the 23rd. The day is called Thorlaksmessa and I suspect it dates back to heathen times: Icelanders get together and eat rotten skate, yes, that is not a typo.

Some cook it on gas burners in their garage and some (like me) refuse to have it near their home. You cannot imagine the smell of ammonia, and that is the good part of the smell. I am not exaggerating when I say that your eyes water within a 30m radius!!! After 10 years of practicing once a year I have gone from gagging trying to eat just potatoes at a table of Icelanders indulging in this speciality to actually looking forward to it this year. We will eat it at the country inn, wearing old clothes that will go straight into the washing machine upon returning home and rinsing off in the hot pot!!!

This is how you do it: rotten skate which has been boiled, boiled potatoes, the hot fat of smoked sheep (with crunchy bits) poured liberally over it (this in itself is stuff for another horror story) and then eat, before the fat goes cold and sets in white waxy clumps on your plate. It helps to have a glass of strong brennivÃ­n (a bit like Vodka) next to you to wash it all down.

After that Christmas unfolds much like anywhere else, and just as well! :)

So even if you are eating rotten fish for the holidays, enjoy!