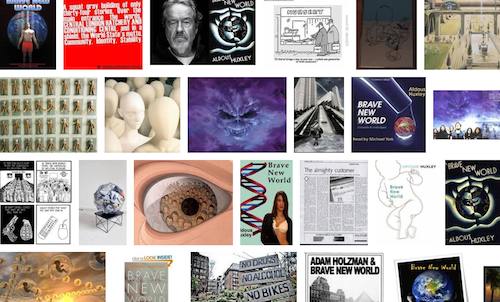 I just finished reading one of The Great Books I Was Supposed to Read in High School– Huxley’s Brave New World. The catch phrase is usually along the lines of “a vision of a dystopian future.” This seems a rather ironic statement given the conversation in the latter part of book between The Controller and John the Savage, that what it took this society to creation it’s utopia was squeezing out most of the things we value- independent thought, appreciation of art, solitary moments of reflection, history, the scientific method.

This reading was done the old fashioned way, an aBook (analog book), that I folded down corners, scribbled notes, and spilled coffee on… 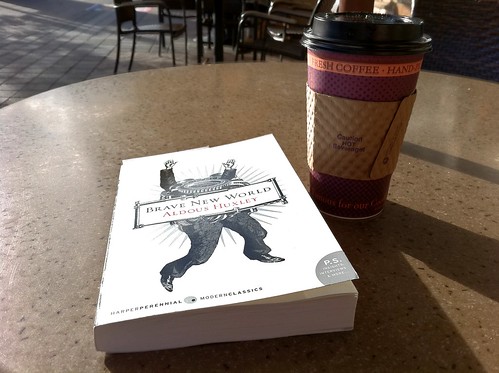 More irony- my caption on this photo when I bought the book indicates I already was pre-programmed with the catch phrase:

A new old book to read, picked up today at Borders near the Biltmore. I can take a dystopian future if there is decent coffee in it.

And hah, now I find with a little bit of googling, the entire text of the book is online at http://www.huxley.net/bnw/. There were rumors of a Hollywood version back in 2008 and is indicated by a 2011 holding place at IMDb. After reading the book, I’m stumped to figure out what a movie could add (likely little). There was a 1980 TV movie made which can be downloaded (I am in the process now of getting it) from http://www.huxley.net/bnw/bravenewworld.html.

Huxley played some interesting approaches with the writing- the first chapter grandly describing the Director’s tour of the Central London Hatchery and Conditioning Center only subtly hints at the overall purpose of the place as it celebrates the giant factory.

You have to give some nods to Huxley’s prescience- alluding to an anthrax war decades before we started dealing with it in envelopes.

And you have to snicker a little bit about the grand creator references to Henry Ford, dates being reckoned in the year A.F., the expressions of “Oh Ford!”.

In the third chapter, Huxley deploys another technique, of switching voice/view between three different scenes, and the pace of switching picking up as the chapter moves along.

Adding to the cold sensation of this future, there is really o hero in the story, the Hero’s Journey never even gets off the ground. It’s not Bernard Marx, who has the rebellious streak but folds like paper. John the Savage is more of a pitiful character, he defies the system and counters the assumptions that all others buy into via their soma haze; but John is misguided too- he is a lost soul not fitting into either world he experiences, and his only guidance are quotes from Shakespeare.

So the question is defining what is happiness? IN this society, it was to choose to avoid unhappiness — to keep the populace “infantile” and essentially numbed from unpleasantness.

“My dear young friend,” said Mustapha Mond, “civilization has absolutely no need of nobility or heroism. These things are symptoms of political inefficiency. In a properly organized society like ours, nobody has any opportunities for being noble or heroic. Conditions have got to be thoroughly unstable before the occasion can arise. Where there are wars, where there are divided allegiances, where there are temptations to be resisted, objects of love to be fought for or defended”“there, obviously, nobility and heroism have some sense. But there aren’t any wars nowadays. The greatest care is taken to prevent you from loving any one too much. There’s no such thing as a divided allegiance; you’re so conditioned that you can’t help doing what you ought to do. And what you ought to do is on the whole so pleasant, so many of the natural impulses are allowed free play, that there really aren’t any temptations to resist.”

John does see the distinction, the loss of what we gain by dealing with adversity:

The Savage nodded, frowning. “You got rid of them. Yes, that’s just like you. Getting rid of everything unpleasant instead of learning to put up with it. Whether ’tis better in the mind to suffer the slings and arrows of outrageous fortune, or to take arms against a sea of troubles and by opposing end them “¦ But you don’t do either. Neither suffer nor oppose. You just abolish the slings and arrows. It’s too easy.”

It’s tempting an easy to pick things out of modern society to suggest it is like Brave New World. I’m not that worried, we fortunately have enough entropy for now. Still, I have to think that some recent experience in dealing with technical support via telephone feels BNW-ish.

First of all, you are restricted to the narrow choices of a menu system, of limited options. What id pressing 1,2,3,4,5 or 6 does not match your needs? Just stand in line. There is the soma and sprayed scent of the hold music and the gentle, recorded voices that remind you, “Thank you for your patience. We value your service. Please wait for the next available operator.” The first you speak to is likely an Epsilon or Delta- they are brainwashed into only following a fixed script. You have to go through an impossible labyrinth to actually talk to Beta or Alpha, and even if you do, its likely you will get riddle speak.

It was interesting to read in the end sections of the book (hey, it’s like DVD extras!) that Brave New World was bashed pretty harshly by critics when it was published. I also enjoyed the letter Huxley wrote to George Orwell, who’s published had sent him a copy of 1984. It almost reads like a comment on a blog post; maybe it would be a fun exercise to write out a fictitious exchange as a series of blog posts or comments.

Hey, I really enjoyed reading your “1984” post- it rocks! I’m sorry I did not comment earlier, but I got tied up in editing my new YouTube video. But you wrote some really powerful stuff there, it reminds me of my own post (link to Brave New World), and I think the world you describe in yours will evolve into one like I wrote about. Isn’t that too cool? Anyhow, see you around the author-o-shere

Okay, that was tacky. Or bad.

If anything, I am left with the sense of futility of the world described by Huxley. Between the masses who were set on a numbed course where they never could even exercise free will, the ones who pulled the puppet strings hypocritically, yet kept the treasures of the past locke din vaults, and the “savages” locked in fences on the Reservation — well, all seem like a New World not worth knowing. I’ll take the current one with all of its messiness.