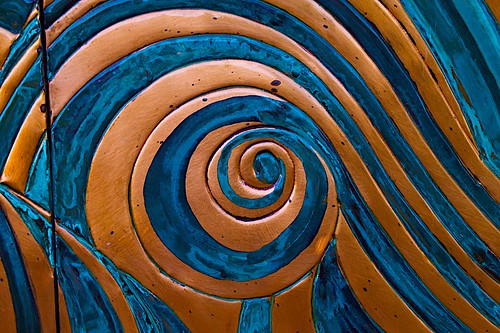 We often frame our ideas about the virtual/online spaces we inhabit as being separate, across some boundary from, the real ones we inhabit- we go binary, either/or, on/off, black/white.

Like the image above, I find it not so neatly define, it is a swirl. Bear with me on a windy trail of a blog post that is starting with one plan, that may unfold another as it flows from my fingers to the keyboard to the wordpress editor to the web.

The photo above was taken 2 years ago while attending the 2009 EdMedia conference in Hawaii- note the visual connection from there to: 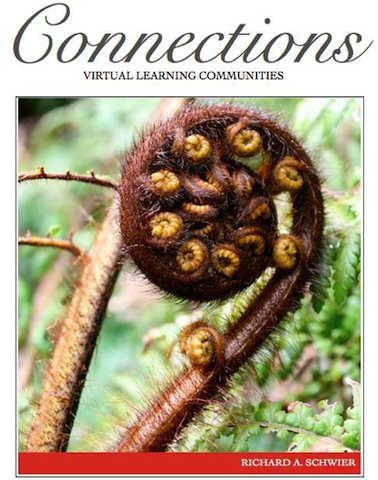 This is Rick Schvier’s recently released epub Connections: Virtual Learning Communities and like Rick himself, it is full of insight, but also, his genial personality.

Connections: Virtual Learning Communities is an eBook that explores how online communities form, who joins them, and how they operate in learning environments.

This ebook pulls together the big ideas from our work for educators who might actually be able to put what we have learned to good use. That’s what this book is about””making sense of online learning communities. In a sense it isn’t original; it is rewritten out of material the VLC Research Lab already created along with a healthy dose of my own speculations. So it is selective rather than comprehensive. It doesn’t attempt to pull together all of the excellent work and writing about online learning.

Before I dip into some bits of the book, it is worth noting, commending (emulating?) Rick’s statement on open publishing- he has compiled this as a free epub, I believe completed while on sabbatical on the South Island of New Zealand- the influeces he see obviously in the photos.

This opening statement says a lot of Rick’s spirit:

As I just mentioned, this book will not be commercial. Ever. It will be free. Forever. If there are any costs associated with its production or distribution, I will eat them. This is more than just a friendly gesture; it is a philosophical position. I am an academic who has been paid generously from public coffers. You shouldn’t have to pay me twice. I also believe, as my friend Dean Shareski once stated, that sharing is a moral imperative“”a responsibility we have as educators””not just a nice thing to do.

In addition, the intellectual rights to this book will never be exercised. I’ve licensed it under a Creative Commons attribution license, so you are free to use this stuff any way it can help you. This book also marks my intention to never again transfer control of my own material to any other entity””chiefly refereed journal articles and book chapters””unless the works are open and free. I’ve been leaning this way for a long time.

That is more than a nodding reference to a fellow Saskatchewan- Dean’s message is one we nod with, but where are we at with making sharing a moral imperative? It general feels like it is something we noddingly agree with- but an imperative? Well, Rick’s statement above, and actions, are one of the clearest demonstrations

And in his style, Rick outlays first the ideas of “communities”

Learning communities happen when those groups transcend the normal boundaries of purpose and engagement. They become something special, something more, and this is at least partly due to recognizing a collective ownership of their learning.

but astutely points out that while we talk about “building” communities, they actually are not created like a machine stamps them out or even hand crafted- they “happen”

As such, communities cannot be created; rather, they emerge when conditions nurture them. This is a critical point. You cannot build a human community. You can only put the conditions in place …is not a matter of laying out a set of rules and providing a structure; it is an act of supporting the natural development of relationships.

Rick then frames the common features of online learning communities — and then stands up and says that he wants to chuck the metaphor of community in online spaces!

So in this book I am eventually going to try to discredit the metaphor of community, even though I feel a little like I’m betraying an old friend who has served me well.

I leave it as an exercise for the reader to see how this pans out. I could quote the ebook all day long — but I want to get back to Hawaii (literally) in 2009. I got an invitation to speak there, but a real highlight was getting to hear Rick’s talk, which you can see has the building of many of the ideas in his new ebook, “Pursuing the elusive metaphor of community in e-learning environments”

Rick presented his ideas in such a refreshingly understandable, non-academic jargon laden manner, that is just seemed like common sense he was sharing.

A connection made at a conference.

The highlight there was the morning we took a casual walk up the beach, just talking work, life, etc. 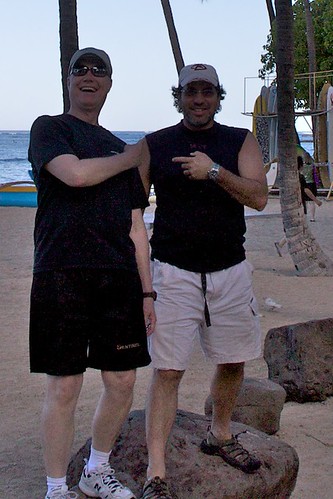 I cannot remember specifics of conversation, but it is this connection, on a beach, under the sun, in the so-called “real” world that amplifies, accelerates the ones made in the virtual spaces where we had crossed before. Or maybe it is the other way. I see the virtual connections supporting the real life ones (I loathe the word “real life” but it works) and the opposite too- the connections made in Hawaii reinforce the ones online.

But they dont happen without our interventions, our actions. They don’t happen because we set up a wiki or a blog or a twitter account.

They happen because we reach out and make swirls of our connections- and finally “real” versus “virtual”? It’s all real to me.

A lot of swirls. 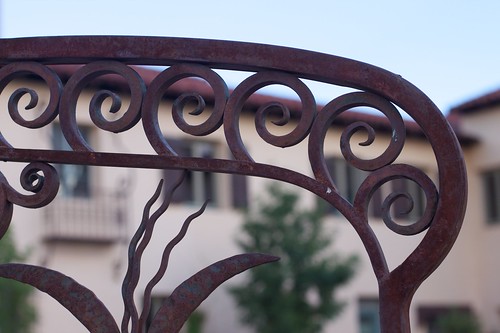 And it swirls more, as this summer I hope to visit Rick again when I cruise through Saskatchewan.