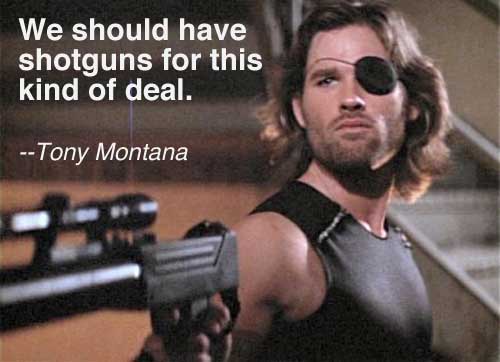 The assignment is to take a photo, a quote from a different character than the one in the picture, and a name from a third character different from the other two, place the quote in the picture, and “sign” it with the third person’s name. The three characters are to be from three different, but similar in genre, series. It’s known as “troll quoting”. For an “official” definition, go here: http://knowyourmeme.com/memes/troll-quotes

I flobbed around a while on ideas, and settled on fishing IMDb for movie quotes, and landed on Pulp Fiction– the quote is actually from Samuel L Jackson’s bible quoting bad ass Jules. The photo is another bad boy that is a Bava favorite– Snake Lipskins (Kurt Russel) in Escape from New York wrongly attributed to Tony Montana – played by Al Pacino in Scarface.

There is some thinking to go here- I did not want a quote that was immediately obvious. There are tons of web lists of internet bad asses.