It’s been running as a free web service for over eight years, from my little humble PHP script hacking in 2003. Feed2JS (http://feed2js.org/) provides a tool where anyone can enter a URL for an RSS feed, choose some options, and generate a bit of cut and paste JavaScript code they can use in their own web sites. Once in place, this provides a widget that is updated automatically as the RSS feed it refers to changes. The idea owes its origin to the early work of Stephen Downes in RSS and the model of a ASP script I found created by David Carter-Todd (who I hope to find when I get to Blacksburg)

In doing this, a lot of traffic is routed through the Feed2JS server. More than I may have even guessed. I developed this and ran it from 2003 to maybe 2005 on a server at the Maricopa Community Colleges, and then had been hosted for free at Modevia Web Services after a kind offer from Aaron Axelsen. I never even had to look at the web server for the last 6 years.

In September, I got an email from apparently the company that bought out Modevia (I had been alerted this was happening) letting me know that they would be shutting down the server. CUt off. They did provide me a few days leeway to set up a new server.

Now I jnow next to nothing about setting up web servers, but with some advice from The Twitter, set up a cloud based server at Rackspace. I got it going, but it was apparently not the most efficient set up, so Aaron kindly configured a new server.

The thing is it runs a lot of traffic, and I am paying by the Gb. In two weeks, it’s been about over 600 Gb of inbound and outbound traffic. The load crashed the server in week 1, and I had to double the RAM.

If it is any measure of usage, the cache directory is cleared daily, and registeres at least 1500 different feeds a day it is serving, meaning it is used on at least that many web sites.

At this rate, its going to cost me at least $200 just for hosting in September (for those who will chime in about their $15 ISP, keep in mind Feed2JS would choke in a shared server environment, it needs its own server).

I can’t afford to do this going forward, and unless something happens in the next few weeks, I am going to have to pull the plug on it end of October. I have set up a paypal donation form, and to date have collected about $70.

But it really needs a major sponsor or some organization to take it over. I’m not too invested in running a web service. But I hate to leave people hanging- when the light’s go out on the server, people’s web pages will spin as it tries to load a script that is not there.

It really is not the optimum set up that there is a single server; a set of distributed ones would make much more sense.

So this is what’s happening. I have placed a notice atop the Feed2JS site: 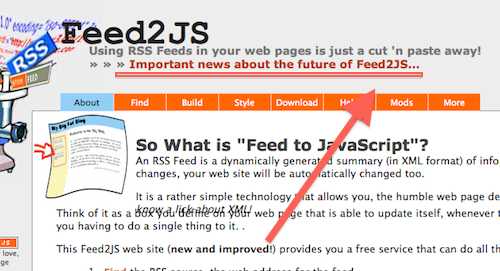 This leads to a web page I made to outline what I have written here, along when three possible futures (see http://feed2js.org/index.php?s=support).

Also, I was a bit reluctant to do this because it suggests a possibility of what some bad person could do with a server, in that I have modified the central script to append a small “please support Feed2JS” at the bottom of all calls to the script (yeah it reeks of advertising): 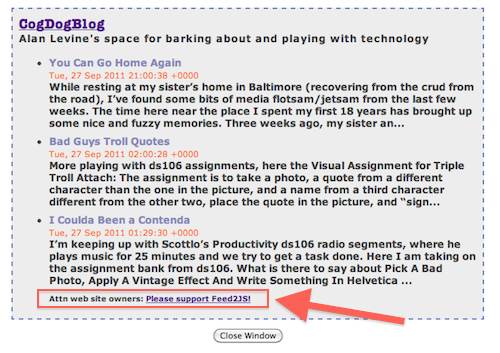 If you follow the link, it gives some info on how you can hide the nag message. It’s not really that tricky.

So why would you donate money if this might go away? I cant answer that either. I doubt a solution is running this on donations. But it would help me out in this lats stretch because IT”S COMING OUT OF MY POCKET and I DO NOT HAVE A JOB!

Better yet, if anyone has connections or ideas for some generous entity that would like to underwrite this or take it of my hands- please contact me ASAP.

I hate to kill Feed2JS, and frankly the code would remain available and open for anyone else to pick up and use/modify.

Please, help me find someone to adopt my little project.

Update: Sept 28 I am happy to report some generous donations came in last night, with a notable shout out to Anil Dash for his personal email. I am about 3/4 the way to covering costs for the next 2 months and have a nibble of interest from 2 sources.