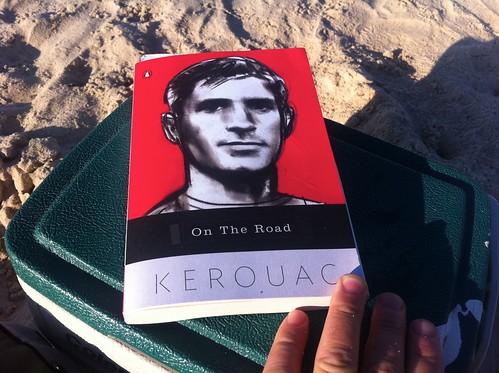 What could be more appropriate for this trip than Kerouac? I picked this book up… on the road? and started reading it on a beach in Virginia.

I violated my rule of writing my review before reading any others; I usually want to make sure I am giving my own impression- but I lapsed and peeked at what the folks wrote at Goodreads. Like most things reviewed, the range is from “THIS SUCKS” to “This is teh awesome”.

This is probably the worst book I have ever finished, and I’m forever indebted to the deeply personality-disordered college professor who assigned it, because if it hadn’t been for that class I never would’ve gotten through, and I gotta tell you, this is the book I love to hate.

I deeply cherish but don’t know that I fully agree with Truman Capote’s assessment: that _On the Road_ “is not writing at all — it’s typing.”

I’m almost 40 and I still love Jack Kerouac’s Beat Generation classic On the Road, and screw you if you think otherwise! Oops, whew, sorry about that! It’s just that I’ve had to be a defender of that opinion for so long now, for all the usual reasons: because Kerouac’s natural writing style, for example, is one step away from natural parody to begin with, because the Beats were one of the first underground groups to get co-opted by the mainstream media, so there were a lot of parodies that came out.

Quite a few reviews are of the vein, “This meant so much to me when i was 16… but re-reading now I see it is crap.”

Well guess what- the book has not changed one bit since you were 16.

The problem I see, which ironically was the way I felt about another book with rhe “R” word, Cormac McCarthy’s The Road, is that people take it too literally. I found McCarthy’s grim landscape of despair as a love story ;-) Seriously.

The problem, IMHO, is not reading Keroauc in the context of the time- of back inserting your own shit into his experience. The writing form represents the mode of travel, the way of being, the rhythm of being ont he road, not seconded in your Lazy Boy lounger. The writing matches the fervent music beat that Dean Moriarity sought it. It was that kind of music that goes way beyond notes and chords, but into the soul and out again.

Maybe it helps to hear Kerouac doing his own words (found at NPR– who the heck uses real audio??):

Sample of Kerouac reading On The Road

The tenorman’s eyes were fixed straight on him; he had a madman who not only understood but cared and wanted to understand more and much more that there was, and they began dueling for this; everything came out of the horn, no more phrases, just cries, ciries, “Baugh” and down to “Beep!” and up to “EEEEE!”

There is that “IT!” that Dean wanted people to taste

“Now, man, that alto man las night had IT- he held it once he found it; I’ve never seen a guy who could hold so long.” I wanted to know what “IT” meant. “Ah well”– Dean laughed — “now you’re asking the imponode-rables–ahem! Here’s a guy and everybody’s there, right? Up to him to put down what’s on everybody’s mind. He starts the first chorus, then lines up his ideas, people, yeah, yeah, but he gets it, and then he rises to his fate and has to blow equal to it. All of a sudden somewhere in the middle of the chorus, he gets it— everybody looks up and knows; they listen; he picks it up and carries. Time stops. He’s filling empty space with the substance of our lives, confessions of his bellybottom strain, remembrance of ideas, rehashes of old blowing. He has to blow across bridges and come back and do it with such infinite feeling soul-exploratory for the tune of the moment and everybody knows it’s not the tune that counts but IT–“

There it is again, Gardner Campbell, Zack Dowell, that connection to music you both write about so well. Don’t we need more IT in teaching? learning? where is IT?

The thing about these free wheelers is not that you “like” them, but can appreciate that they were visibly breaking out of stale norm of expectations that was this period of the late 1940s. Dean was not there to be your pal, he was there to let you know what it meant to be alive, and he kept to his beat while the other characters in the stories left the road, settle back into modes of “normalcy” (e.g. grew up from being 16).

Yet what he saw, is that people are fearful of this place, that they leave the road:

“Now you dig them in front. They have worries, they’re counting the miles, they’re thinking about where to sleep tonight, how much money for gas, the weather, how they’ll get there– and all the time they’ll get there anyway, you see. But they need to worry and betray time with urgencies false and otherwise, purely anxious and whiny, their souls really won’t be at peace unless they can latch on to an established and proven worry and having once found it they assume facial expressions to fit and go with it, which is, you see, unhappiness, and all the time it flies by them and they know it and that too worries them to no end.”

Now of course no one really lives like this burning candle. I sure don’t. And that is where people retreat, fold their arms smugly, and talk about how poorly Keroauc’s style was– it is that worry eating at them, the lack of ITness (I know that feeling).

I could not live this still and don’t and do not expect anyone else to, but the thing is to have a taste at times, and know the taste, and do not lose that taste.

Our battered suitcases were piled on the sidewalk again; we had longer ways to go. But no matter; the road is life.

That is my learning- the road is life. Why choose anything else? 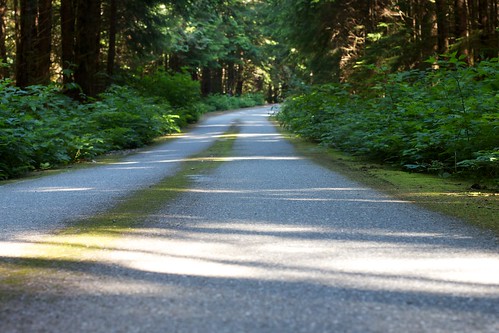 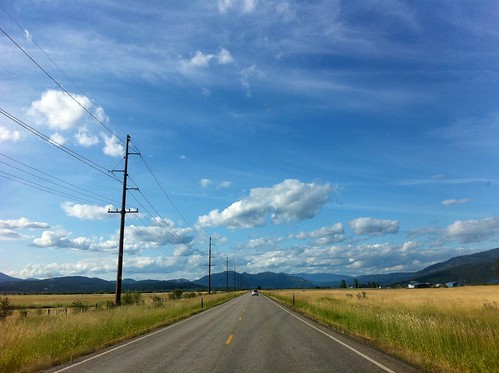