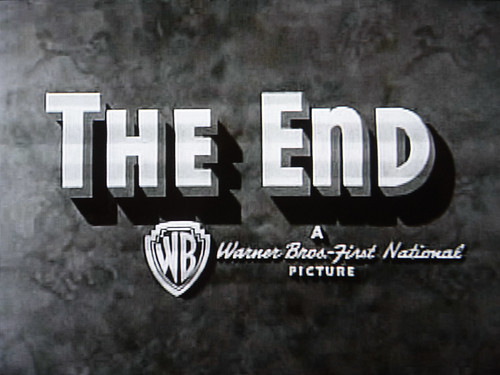 It was March 17 of 2011 when I described my [quasi] plan to jump out into the great wide open, which was most filled by the 5 month/15,000 mile road odyssey, but started with some reflection time and travel before the road trip, and capped by a 2 week jaunt to Australia.

Today was a day that began in the future with the first of 3 flights our of Melbourne, Australia and ended with a drive up to Strawberry in the snow — and this day seems to smolder as my body and mind remain on other time, while logic suggests sleep should be happening now (the clock reads 2:59 AM).

Giulia suggested returning to that March blog post to match my expectations to the now, and this seems like a place to start, though I predict few seminal conclusions. The purpose really was to experience this time, and see what would happen when I unplugged from the path I was on.

So my plan is to NOT work for a while, not plunge into another job, to unplug, unwind, rewind, and take time for to let that thing I should be doing next reveal itself.

This has certainly transpired- I’ve not had a paycheck since the end of March, and really only did 5 or 6 paying gigs, and more of them in the beginning. And I’ve managed to not let the lack of income be too much pressure yet, and I have enough in the bank to go a few more months if I have to. Perspectives change when you start paying for your own health insurance, and priorities change on the expenditures (no camera equipment purchased in this time).

I had set May with a string of travel and speaking commitments but also set that time for:

to go hiking, kayaking, rediscover my love for road bicycling, paint my decks, and hanging out with my local Strawberry/Pine non tech geek friends.

Some of this was done- the deck took a lot out of me, but I was proud of getting the job done 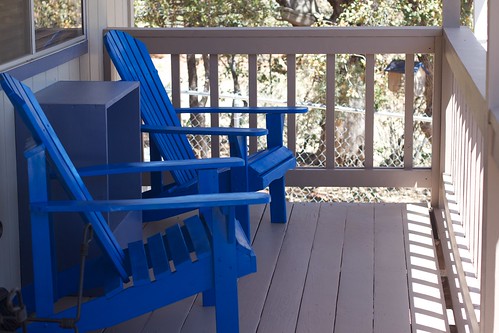 I did less kayaking, and although I carted my road bike on the big troop, besides an inspirational ride to Banff with D’Arcy Norman, I did not get much biking done.

In late May or June, I am going to pack up the truck with camping gear and my bike, and head out to see America and Canada without a planned schedule. I want to visit friends and family and colleagues I’ve known through the last 20+ years of networked working/living. I have some quarter-baked ideas to turn some of the trip into a project- and yes, it shall be blogged. I thought about doing up a tumblr or posterous site for the trip, but it really belongs right here, at the CogDogBlog.

The Road Odyssey was all this and more — though it turned out to be a rather largely planned schedule once I starting pinning on the map all the folks I wanted to visit. For many parts, I was driven literally by this schedule, sometimes too much. But it was all worth it for the people I got to spend time with. The best part was the staying in the homes of people I had known online, and I find the entire loop of friendship is strengthened by having this face to face time.

A lot of times I got a response like when I visited D’Arcy when he said, “Sorry we don;t have anything exciting planned”. My answer was that I was not there to go bungee jumping, I was there to be with people in the way they lived. And there was opportunities that just happened along the way, like a few days on Heather Durnin’s farm in Ontario, meeting Sheryl Nussbaum-Beach in Virginia (and she offering me the trip to Australia), and more. Much more. The people I stayed with were the real gems of the trip.

And yes, I did manage to find a project for this trip that became a large part of it- my digital time capsule StoryBox. I have well over 1000 photos, videos, audio recordings, documents on it, and am just starting to plot what might come of it. It is a treasure- thanks again so much Zack for asking me if I wanted to take a PirateBox on the trip. I collected more content while in Australia, and plan to leave the dropbox open til the end of 2011- and then the collecting part is finis. 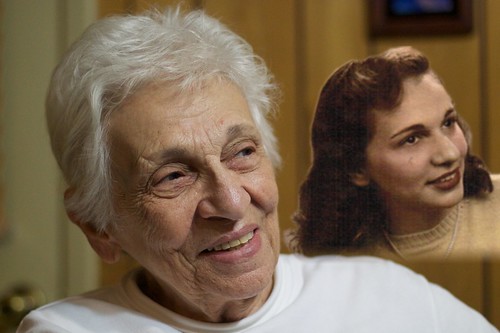 What I did not expect in any way was to lose my Mom and the outpouring of support by friends via comments, tweets, live music played on ds106radio, and the unforgettable #cookielove still- still in Mom;s words, “blow me away”. And I have not even come close to gripping the reality that I will no longer be able to talk to her except in memory, where I am fortunate to have plenty.

Oh, Mom shall make me smile widely when her butterfly floats my way.

At some point next fall, the circle will close, and I will be moving to northern California. It is then I will figure out “what to do”, which might even include doing some consulting”“ I’ve even set up a domain and site for what I call CogDog It (http://cogdog.it/). I imagine where I end up is in a similar domain as I work in now-education and/or non-profit, but who knows?

Without going too much into the whys, but trying to embrace the need to face regrets, this plan for 2012 is still in formation stage. I will again be traveling, and plan to be staying longer in one place, but its too soon to pin down details. I have decided I don’t really want to be a consultant, nor a Motivational Speaker Living in a Van By the River. The big “what’s next” has not revealed like a marquee in the sky.

But I do know in many ways I want more of what I have gotten to enjoy in the last 9 months. I have been incredibly fortunate. While I make jokes about people working “pressing bars for pellets” I accept that I have been blessed by the gift of my late Aunt Martha which enabled a good part of the time away, and in some ways, I have more of a cushion with the future proceeds of my Mom’s estate. I cant find a need to buy myself big ticket items, and I can see little more interesting than the item of time.

This time has been so valuable on its own- and I am thinking more about the value of pulling of of the work treadmill. Yes, I was enabled by a generous gift and a lack of financial dependents. I was struck by this watching the TED Talk by Stefan Sagmeister on The Power of Time Off. A highly successful designer, Sagmeister does one every seven years, his “seven year itch”, where he does not take any new work, and goes a way for a year to nourish his creative center.

(I had seen Sagmeister talk at an eLearning Guild conference in 2008, and was inspired then by his attitude.)

For himself, Sagmeister can clearly show how is projects following the “itch” time are connected directly to ideas generated in this time. His idea of restructuring the learn/work/retire timeline resonate with me, taking 5 off of the end and re-distributing it in the middle 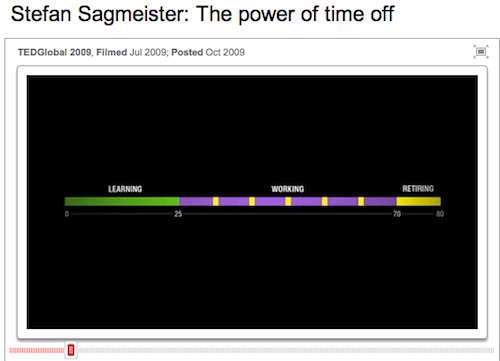 Also is the knowledge that right now we spend about in the first 25 years of our lives learning, then there is another 40 years that’s really reserved for working. And then tacked on at the end of it are about 15 years for retirement.

And I thought it might be helpful to basically cut off five of those retirement years and intersperse them in between those working years.

(By the way, I am really liking the way TED Talks not only are provided with the full transcript, you can click anywhere in the text to go to that part of the video, +1 + 1 + 1).

Probably our time “learning” is the freeest portion of our lives; I recall being in grad school maybe feeling stuck because of not having much money, but there was a lot of time and freedom on those years, and I ran that train into my late 20s. My next “itch” like break was in 2000, when I was fortunate again at Maricopa to get a 6 month sabbatical, where again, I did a heap of travel- blogging it before there was blog software. That time too was well worth it in terms of connections made, and new portions of the world visited. 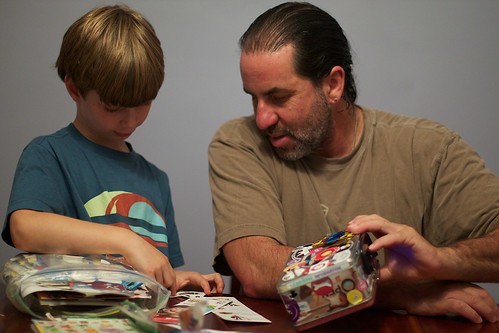 So I am buying into the power of finding a way to get this free, creative space in our lives. Now many of you are going to say, “easy for Alan to do” because of X, Y, Z in terms of commitments (I would sneer at myself too).

But there are other ways to find this space in what we do without quitting our jobs. Maybe it is looking for the Unplug’d opportunities. And you are going to hear me urge alot of you to flex your creative muscles via ds106. Maybe it is taking on the challenge of learning something new (like Dean playing guitar). Maybe it is doing daily photography. I could go on and on, but I firmly believe in the generative power of taking time to do something not in our routines, and doing something creative or that extends beyond where you think you can go. 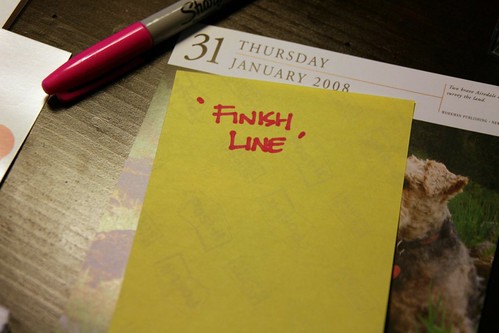 So yeah, the 2011 Road Odyssey has reached the finish line, but I am still on the go.

Where will you take your creative self this next year? More than once you will suggest it is #4Life