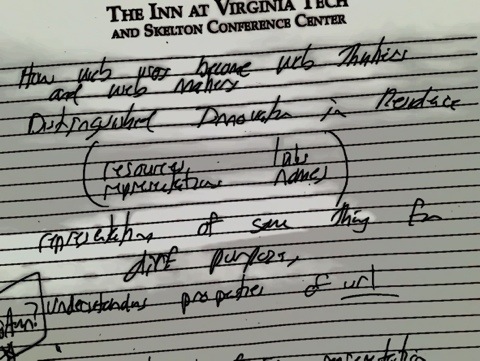 Yesterday’s serene country side drive to Blacksburg was the perfect set up to attend the 7:00 pm talk by Jon Udell — who is here as the first Virginia Tech Distinguished Innovator in Residence. I was invited down by Gardner Campbell, who first connected many of us in education to Jon’s work. As that story was even told last night, it was instigated by a simple blog track back ping, via one of those humble…URLs.

is an understatement of the way Jon points out the power of those constructs that make the web, a web.

Jon’s public talk was part of a series of meetings, presentations, in class teaching, out reach Jon is doing here over a few days. The talk’s title “How web users become web thinkers and web makers” is very key for me as I am trying to bootstrap off of his thoughts on web thinking in designing a new course at UMW- an idea of using the creativity and framework of ds106 on a course about building web “experiences” and gadgets without being a programmer.

Jon got to a description of this at the end of his talk, where he mentioned wanting to help people understand the concepts of the way the web works to be able to assemble bits of it into new forms, like a Tinkertoy form. It’s a pushback against some of the current ideas that everyone needs to be a programmer; more that everyone needs to have an understanding of what programs are capable of and some meta tools/strategies for connecting them.

I was glad to hear (as well as chat later in the bar) that while the word “computational thinking” has some traction, it does not feel right- the “web thinking / web making” comes from stuff Mozilla is aiming at e.g. via Mark Surnam — I’m still even reaching for a name here, it was “Computational Creativity” but that first word feels too limiting, mechanical.

But I digress from the topic of Jon’s talk, he breaks it down to the elements:

and describes with examples how the same thing (e.g. a calendar) has different representations on the web for different purposes (HTML vs data as XML vs a PDF).

He illustrated the way URLs act as keys to object or idea’s “home page on the web” and hardens back to Tim Berner-Lee’s original www proposal where URLs act as database queries. This idea that informational is addressable, and approachable by people seems to be at the core of Jon’s interest, and what we lose when that functionality is say, hidden inside an app.

Video is usually not addressable by segment externally, although the TED video example he showed actually is doing that internally to link video segments to the transcript; the same video can have ant segment be likable via YouTube URLs… And this is actually a coming web standard for media fragments.

Jon moved on to sharing how the simple idea of tagging becomes a vehicle of knitting together those small web pieces, showing his local example of tagging a watershed issue has become a local tag “standard” http://www.ci.keene.nh.us/city-keene-tagging-initiative.

In his style, he plugs that 14 character tag, with 36 possible letter/digit characters “WestStDamKeene” into WolframAlpha and shows there are more combinations that grains of sand on a beach — and with that tag URL, one grain among all those becomes uniquely addressable.

For his work on syndicating community events you would link he is focused on calendars, but it is IMHO a vehicle to illustrate through real action these principles of web thinking. Basically, calendar information should be highly structured (and is standardized) but in practice the data (resources) is published in forms (representations) that are not able to be syndicated.

The syndication idea is that the answer to the question “What is going on around here” is that “it depends on whose web page you manually look at. Jon is using syndication tech to build “hubs”, the project he piloted in Keene, but has been working to set up in other communities– which in fact is what had done in prep for his visit to Blacksburg.

This was a subtle element of Jon’s talk, he had done his research and used local examples (e.g. the links to city council meeting) and had a listing of “dark matter” organizations that published calendars in forms not accessible for reuse and (was it “light matter”? Or “bright gems”) ones that did, either via .ics forms or simply but hosting their event calendars in google.

This is hardly an organized summary of a great talk, it was recorded and hopefully will be available soon. It’s an honor to be able to listen and be listened to by Jon (as well as going for dog walks like I did a year ago on a visit to Keene).

He is an educator to the bone who works completely outside the ivy walls.

I’m fired up to be thinking about web thinking. In terms of where education has faltered, it’s not that we are teaching kids to be programmers, but “we’ve failed to provide the basic conceptual tools” for helping learners think about what programmed things can do.