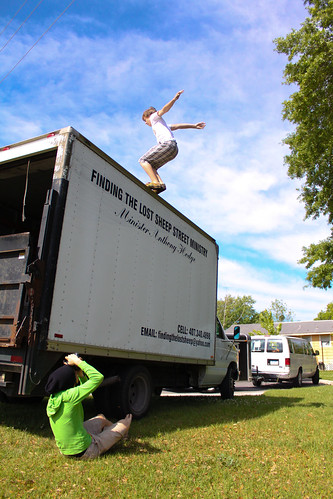 When you blog something, it can often by the metaphorical quarter baked idea. When I wrote suggesting that in looking at ideas such as a flipped classroom, why weren’t we seeing more flipping of professional conference formats?

Why cannot we do this for conferences? All of that content stuff that we fill up the agenda with- presentations, videos, talks, can be done before the event, and we can use the bulk of the time for the stuff that counts- discussion, debates, conversations”“ in fact, I’d like to go to a conference where we get to do something, make something, instead of talking about doing things, or showing pictures of people making something.

This was echoed by Audrey Watters, meaning it now had some legitimacy 😉

But I really did not spell it out maybe as detailed as I would like- I was more interested in the latter half of that paragraph “where we get to do something, make something, instead of talking about doing things, or showing pictures of people making something.” but people tend to cast the flip method more like the first part “All of that content stuff that we fill up the agenda with- presentations, videos, talks, can be done before the event, and we can use the bulk of the time for the stuff that counts- discussion, debates, conversations”

But it slid off the attention scope until I got a pingback from the blog David Wicks, who decided, as a conference program chair to push this format at the Sloan Consortium recent #et4online conference — but note the method:

As program chair for the 2012 #et4online conference, I brought this idea to the conference steering committee. We agreed to support a small pilot project to test this idea. Four sessions flipped their presentations by sharing content-related videos prior to the conference.

I was reminded of this recently while lunching with Todd Conaway, wh shared that his session at the conference could be considered flipped as well, since he pre-prepared a website with all of his slides and videos ahead of time.

Todd shared that the flipped sessions were a mixed success, which I also get from David’s blog post.

I’m not surprised- this is not the way I would flip it.

The problem is considering the key factor of motivation. In a classroom, students are going to be compelled to read chapters and watch videos before class because of the motivation of grades (mostly, I am generalizing here, and I was the nerdy student who read textbooks for fun).

Besides the load it must have put on presenters to develop a lot of stuff, frankly I would have little expectation that people would preview content before going to a conference. I know I would not. its a lot to ask.

To me, thats the butt end of the flip, and most people talk about the flipped part being videos. Watching a video is time intensive, you cannot skim or scan quite as easily as text, you are locked in usually for the whole bit.

I am not going to give homework to my conference session attendees.

The part to put out there really should be a thought question, or put out a list of things you want people to bring to the session (a bad photo, a lesson plan).

To me, what I want to flip the most is that format where the audience is passively seated in neta rows of chairs, supposedly listening to the dude/dudette at the fornt with the slides, but more often than not doing email.

That’s the mode that needs flipping.

Get them out of the chairs. Get them doing something- this was the approach I did with Nancy White and Rob Cottinghom at a Norther Voice session on Improv- check out the energy in these photos

The videos, links, etc are nice to have as an after flip resource– but do not realistically expect people are going to pre-watch a video for your conference session.

Don’t just flip for the sake of flips!