Our romance started in March, 2004, although I had been seeing someone else– it was this activity we had in common, then I called it Photoblogging. But then I met… flickr. It was, and in many ways still does, to me reppresent the first and foremost social medua experience, even if everyone else wants to hang out at the mall. And we survived the stormy year where she went off and moved from Vancouver chasing fame and perhaps mis fortune in California .

But you know love has a cost (no it is not that kind of relationship), but flickr does have her annual needs. Today I renewed my annual Flickr Pro account. Since then I have had 9 years invested in this relationship (summoning Lorne Green “That’s about 65 for you and me”): 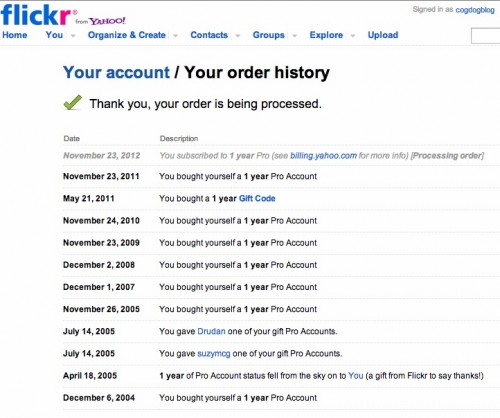 But this is not a relationship based on money or coffee even.

My stats have shown spikes of daily views over 2000 in the last year. Thats small compared to big flickr stars but to me it is pretty Cool.

But its not about numbers even.

It’s the crazy serendipity when you meet someone who commented on your photo at a workshop in Tasmania. Or how a photo of a pile of logs leads you to meeting a valuable colleague who happens to make hand made pens.

I could go on and on.

But flickr to me has been one of the most important in the way, to me, the internet operates as serendipity catalyst. It does not cause serendipity (because it is not really a thing) but creates the conditions in which it can occur. It creates the potential for serendipity.

And if you do not want any serendipity in your life, then by all means DO NOT OPENLY SHARE ANYTHING! KEEP YOUR IDEAS AND CREATIONS OFF OF THE INTERNET. Make it hard to find, lock it behind password and paywalls, and then you will be safe from having anything wonderful happen to you.

Flickr, we still got a thing going. I hope you are in it for the long haul cause I am.

PS: With some irony the creative commons flickr photo used above “Love Like a Card Game”, is no longer even on flickr- but it resides on fotopedia. Love lost. Love found.