I was not happy with the way my site was working out to present the new collection of True Stories of Open Sharing. I found my categories were forcing me into artificial classification. And the nifty gizmo I had used previously, CoolIris, for the “wall of media”, works, but is annoyingly tedious to update (manually editing of a Media RSS file). I also thought I could embed videos directly from YouTube, but no.

The answer? Of course, a new WordPress site – http://stories.cogdogblog.com/ 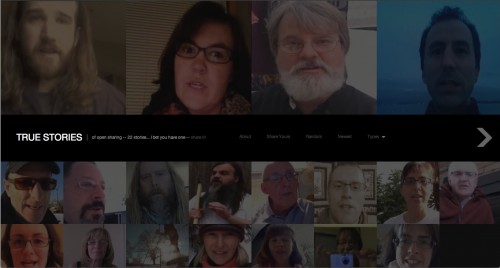 I was hoping for a theme that was kind of like a video carousel, where I could load stuff in a lightbox overlay off the front page, maybe from a post excerpt. Most themes I found were ones that had nice front ends, but pointed to videos on a post. And heck, I already had one working well for my photo gallery with customizations done to randomize the front page, and everything else I needed. It was a matter of a new Hippe Hosted Shnizzle install, some tweaks to the child theme (based on GraphPaper Press Full screen).

Moving the content over was not too much work, and I could use a much larger video embed than before. I can use the front page for presenting as more of a random serendipitous play, and I could explore by category or assemble some re-ordering. But more so it feels more elegant. To me.

So now I have 22 stories. I want more. I would like to double the number by next week; I am slotted to present this sometime second week of March for ETMOOC. I’ve already done one round of email nags, and if I know your address, expect another.

What I am asking for should take you less than five minutes. Pull up youtube, comb your hair, and use the web cam to record a story. What kind? Just tell em of a time when being open or sharing on the web led to an unexpected positive outcome. It happens all the time!.

Watch the video and send me a story!