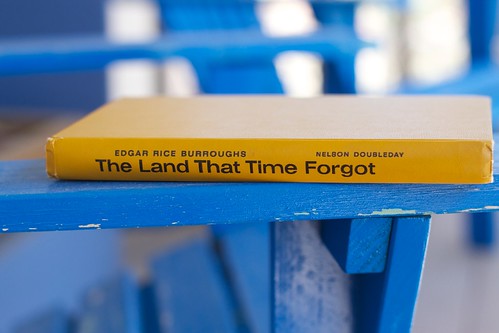 I finished a book recently. One of those old style piles of paper bound in between thicker compressed fibers. I grabbed The Caspak Trilogy by Edgar Rice Burroughs, the first 9and title on the spine) being The Land That Time Forgot (also available from Project Gutenburg if you want to flip the bits).

It’s no literary tome (not that I would know), its basic adventure storytelling, paced out for the serialized story it was– and almost 100 year ago. Without saying much of the plot, some adventure seekers, plus a few Germans for tension, end up being marooned on a strange island full of strange beasts, including ones from dinosaur era. Each volume of the three is centered on the resourceful male hero, be it Bowen Tyler, Tom Billings (sent to rescue Tyler), Bradley [No Last Name] who turn out to be fairly interchangable. They are one dimensional, and the females even less as they end up being fawning objects.

But it’s fun stuff. I just chuckled at this terse low rating review on Goodreads:

C’mon, it was written starting in 1918! I am so surprised to not find political correctness before women could vote nor civil rights has even recognized. Give Burroughs some creative credit for creating an ecosystem that perhaps does not hold up to scientific scrutiny, but WTF its not a documentary. The environs of Caspak was enough to suspend my disbelief, which is what stories should do. The plot elements of the U-boats (which I mistakenly associate with WW2 but were definitely around in the first war, airplanes, air drills, etc.

And the island must have inspired some film maker who would later make a small flickr about a remote island full of living dinosaurs. Yet in the spirit of knowing everything is a remix, the mystery island idea was done earlier by Jules Verne and Arthur Conan Doyle.

my favorite character was the true hero, Nobs the Airedale. Hands down…. er paws down.

Okay, I know Burroughs mainly form hos most prolific work, Tarzan. But digging into his background, some gems. Born in Chicago, to a businessman who was a civil war veteran, Burroughs, like most young people, bounced around a bit, flubbed out of the military (though spent time here in Arizona at Fort Grant).

And his life changing moment came as a pencil sharpener salesman!

By 1911, after seven years of low wages, he was working as a pencil sharpener wholesaler and began to write fiction… During this period, he had copious spare time and he began reading many pulp fiction magazines. In 1929 he recalled thinking that

So basically Burroughs saw a form of pop culture and got interested in making it. Did he enroll in a University? enroll in a MOOC? No, he studies the form, and started creating.

but he was savvy. He went against convention. With the success of Trazan, he might have pioneered the marketing we take for granted around successful media- merchandising (emphasis mine)

Burroughs was determined to capitalize on Tarzan’s popularity in every way possible. He planned to exploit Tarzan through several different media including a syndicated Tarzan comic strip, movies and merchandise. Experts in the field advised against this course of action, stating that the different media would just end up competing against each other. Burroughs went ahead, however, and proved the experts wrong “” the public wanted Tarzan in whatever fashion he was offered.

So even if the stories were predictable, in the Caspak trilogy they typified the arc of an adventure story. Even if you knew the heroes would succeed, it was finding out how Burroughs would make it happen that was the fun part.

And then I see the story was made into a movie, perhaps cheesy, in 1975, with Doug McClure as the action hero:

Yeah the dinosaurs like like plastic toys! But its looking rather GIF ready… and that’s what counts.