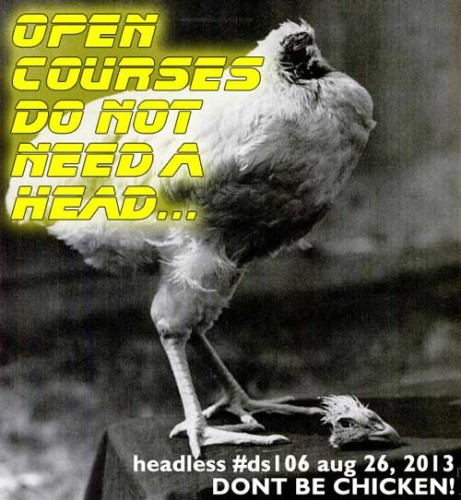 In about 10 hours the first week of Headless ds106 launches– the first week’s assignment will be published at one minute past midnight (PST) and will appear at http://ds106.us/category/the-site/fall-2013-headless/.

We already have 38 blogs in the mix- check out all the posts from participants. If you are new to ds106, your task this week is to set up your ds106 blog space, register it with the ds106 site, and once you post something, your blog will appear on the right side list. This week is not taxing- a few videos to respond to about art, doing a few daily creates, and getting into the habit of writing up a weekly reflection. And being part of our online spaces in twitter and/or Google+

If you have been around the ds106 bend before, what you can do to help is welcome people, offer advice, and model good ds106 blog writing behavior. Or document your creative process. Or share your favorite work from the past. Or do Cat Breading. Whatever.

Of course, as an open course, everything on the week’s list is optional. No grades, no lecture videos, no apologies.

And for those who are new to ds106, it is going to look chaotic at first. And later. This is not a course of rigid syllabi details, we are not going to offer explicit instructions on how to do your creative work. The idea is not to learn directly from an instructor, but to learn alongside others figuring it out as well.

So you know what is coming (you can get a general idea from the syllabus, yes there is one of those), this week and next are for having people get their blogs un shape, explore how to customize them, do a bit of small media creations, explore the ideas of personal digital space. IN week three, we move into an introduction to digital storytelling, and in week 4 we enter the creative long stretch of the course, starting with appreciating (by listening) to audio storytelling.

Although we call it “bootcamp” the first two weeks are pretty light- this gives everyone a chance to learn their way around, to get in the social media mix, and providing some flexibility for those who jump in during this stretch.

As far as the chicken? Do you know the story of Mike?

Lloyd swung the axe down on Mike and chopped the chicken’s head off. But much to his surprise, the chicken did not die. Mike was still able to balance on a perch and walk clumsily. He even attempted to preen and crow, though he could do neither. Olsen decided to continue to care permanently for Mike, feeding him a mixture of milk and water with an eyedropper.

Once he got used to new and unusual center of mass, Mike could easily get himself to the highest perches without falling. His crowing, though, was less impressive and consisted of a gurgling sound made in his throat, leaving him unable to crow at dawn. Mike also spent his time preening and attempting to peck for food with his neck.

If THAT is not a metaphor for open learning, for dealing with your hand, for going against the grain. I don’t know what is.