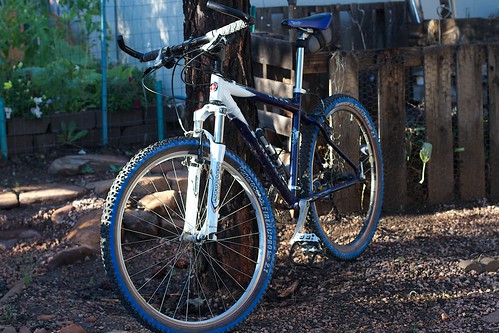 My summer project of getting back into mountain biking has been crammed into late August and September. I bought that Schwinn Moab in 1999 to use when I lived in Phoenix to do off road bicycle commuting. It sat for 2 years while I did my round the country travel. Since Todd Conaway urged me to try and ride the Fire on the Rim Mountain Bike Race (I am not racing, I just want to finish one loop), I’ve been riding more.

On a ride we did in Cottonwood, I took a spill and ended up trashing my rear wheel. I was at our local market, and a friend was selling raffle tickets for a race related drawing for a new bike. I joked that I needed it earlier since my wheel was kaput. She told me that a guy had just stopped by who was opening a bike shop in town.

Now Pine is bigger than Strawberry, but still pretty small, maybe 2000, 2500 people. I would never have thought there would be a bicycle shop; if anything they always seem to add a new antique store.

But I got Kevin’s number and called him Monday, explaining the situation. I started to ask if I could bring it down later in the week, and he said, “Bring it on down now, I’ll see what I can do.”

He was not even fully set up and said he was not officially open, but he put my wobbly wheeled bike on the stand and started fiddling with spoke tension trying to straighten it. He finally told me it was likely not repairable, and then showed me how the seem showing on the rim wall was an indicator it was ready to fail anyhow… and he went on to start teaching me about 5 more things I have now forgotten. He was not ready to order parts, but suggested I go to the shop down in Payson, 20 miles away.

Yeah, he sent me to a competitor.

I got the wheel fixed in Payson, and was fairly happy with the mechanic there, who I have used before. I went back a week later to the Payson shop because I needed some spare inner tubes… but on a weekday the shop was locked. The sign pasted on the door was apologetic, but more or less said he had so many repairs that he had to close the store part to finish his backlog (I’m glad I got mine in earlier). That is what can happen as a one person operation, I guess, but U had wasted a trip.

I returned to Kevin’s shop in Pine to get the tubes and show him the new wheel. We talked about tiding around here, and how he returned here from California after having grown up in Rim Country. He pulled the bike in the shop, and started explaining, no sales pressure, some things he could do to improve the bike, especially in light of the big ride this weekend. He suggested replacing my front heavy, not so flexible shock with a refurbished one off of his own bike. I was thinking this could be a few hundred bucks, which I don’t have to spurge on the bike, but he told me he could sell the fork for $50 and charge $20 to put it on. He also showed me a handle bar that was about 2 inches wider, and how a wider grip would help me.

Well this narrative is going way longer, but I took the bike down Monday and it was ready be late afternoon. He not only did those replacements, he did some stuff only an experienced rider/mechanic would think of, improving a chain guard with an old tube and zip ties, tightening the seat tool bag with an old toe strap, and I am sure he adjusted the brakes, and cleaned/tuned the gears. He outfitted the shock with a handle bat mounted shifter to lock the shocks so they would not bounce on uphill rides. I got a detailed itemized list, and the steps and specs for pressuring the air in the new shocks

I was happy with the work and the price, but then when I got home, I had an email, where he had sent me some before and after photos of the bike.

I cannot say I have ever had anybody repair anything and been this enthusiastic, and eager to share knowledge. When I saw the images he had taken, the bike in almost the same position outside his shop, I was keen to turn it into a before and after animated GIF:

I took it for an extended ride today, and it feels like such a new bike, although I already trashed it by riding through a ton of mud. But it is even more exciting to ride.

Now here’s the thing- this exchange with a business is now a memorable one. I have no idea what they teach in business school, but it sure seems like most of my interactions with stores, companies, are pretty much transactional, and not so memorable.

I’m not saying I expected all companies to have the same outgoing and enthusiastic operation mode as Kevin, but, on a person to person level, it makes a huge difference.

And I am going to be making a larger leap with this in October when I am at the Minding the Futures conference Jim Groom is organizing at University of Mary Washington. As educators we can be invested in making memorable learning experiences for students, or we can focus on scale, bottom line, pumping enrollment, mass badging degrees. Yes, we can become as efficient as any playdoh factory, but will we be creating memorable experiences?

I want to be part of something that provides and someone who receives memorable experiences. Life is too short to be just efficient or count the beans.

I have no idea if Kevin’s business will fly, he is also repairing quads, and there are a lot more of them around here than bicycles. He even photos of my bike on the store’s Facebook page (wow, he is that good that I am willing to Like the page in Facebook).

I’ll be back to his shop for sure.