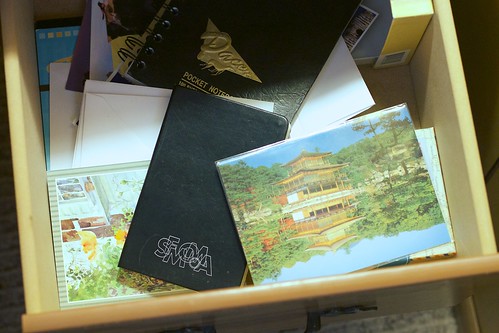 What was I looking for in the drawer in my office? An envelope? For some reason, I lost track of the task at hand, and noticed the black moleskin notebook with the SFMOMA logo.

And lost myself down a memory hole as this notebook contains shreds of events from perhaps one of the most tumultuous 6 months in my adult life.

But first, the book.

It was a gift, the best kind, unexpected, and given for no occasion. Peter Samis, a colleague and dear friend from my days at NMC, director of education at SFMOMA, was a voracious notetaker. 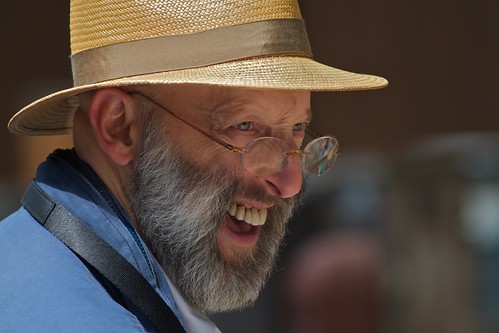 In his travels, work, he always jotted sketches in his moleskin notebooks. At an NMC Board meeting, I saw him crack out a new one. 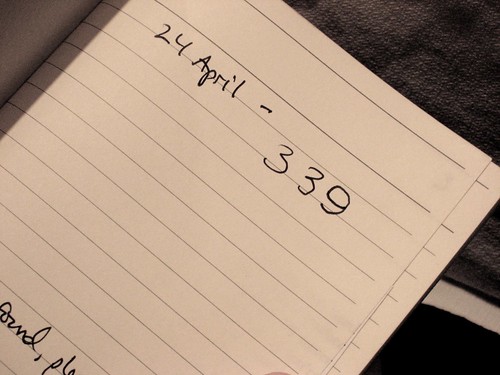 In 2006, that was number 339 in a long series. Peter showed me his notes, and talked about the way he used it to process ideas, how he always had it with him.

It is his blog. 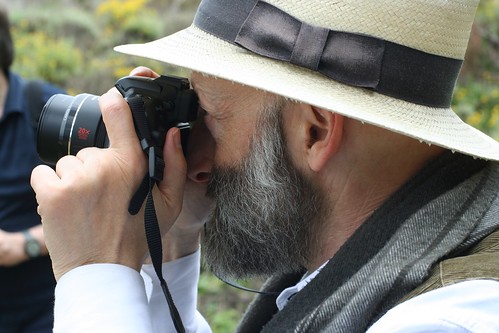 There are so many things I like about Peter, his breadth and passion for art, his love of photography, his love of laughter, his classy hat but mostly… he is just a genuine, caring person.

Peter called me out of the blue a few months ago, just to catch up. Of all the colleagues I knew and worked with in five years at NMC, he is the only one who has reached out to stay in touch. 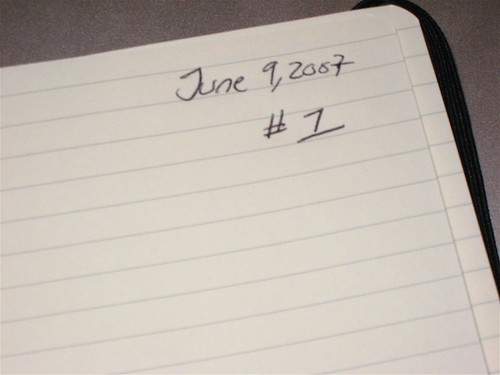 It was so thoughtful of him when he handed me my own moleskin at an NMC Board meeting in 2007– notebook #1! On that first page I read:

Apparently I did not take many notes at the meeting, because right below that is a note from the vacation I went on right after the conference; my wife at the time flew out to meet me in Minneapolis, and my notebook has a rather detailed bit of notes of places we went, meals eaten, relatives visited.

Right below the note about getting the book, is the incomplete:

I never found that quote, or rather never put it in my notes. It must have been on a statue, or museum– but Google makes it easy to find

To be complete, right now, I wrote out the quote on that page. No rules against editing one’s notes.

I am rather surprised at the level of mundane detail I wrote for the rest of the trip, I must have motivated… for a short while. Subsequent entries, undated, look like some of my technical notes, ones about the flickr API, Second Life, Horizon Report, drupal (WTF?).

Then, I was inspired by something D’Arcy Norman had done in his notebook, sketching a “History of Blog”, so I DWDD (Did What D’Arcy Did), a few pages of notes, and then a chart attempt 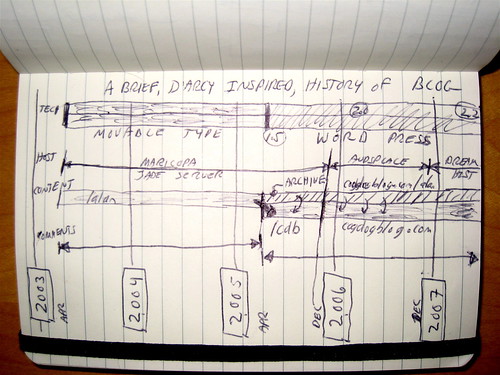 This is followed by more pages of technical notes related to NMC work; then on a September 3 2007 trip to LA, I had time to work on plans for my upcoming grand tour of Australia, all capital cities in 2 weeks. There are notes on the presentations and workshops I was working on, and percentage estimates of how complete they were 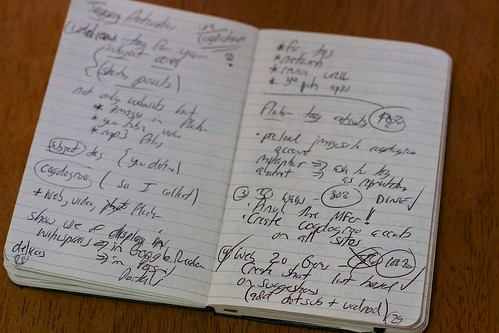 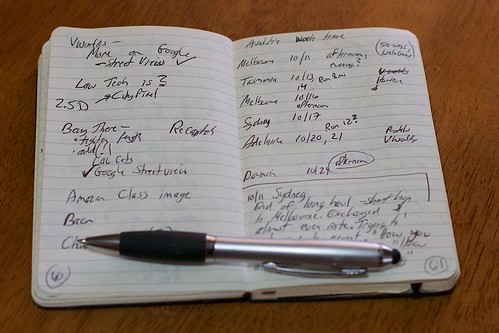 For all the interest in notes I find, I see more gaps.

Oh look, more notes of NMC related projects and tech. Then a few from my first SXSW conference in March 2008, a panel session named for a Zeldman quote

Don’t worry about people stealing your design work. Worry about the day they stop.

My own hand written note:

Yeah, I never completed the sentence. Do I have too?

And then a telltale page, what looks like to anyone else just a list of phone numbers, addresses for utility companies and banks 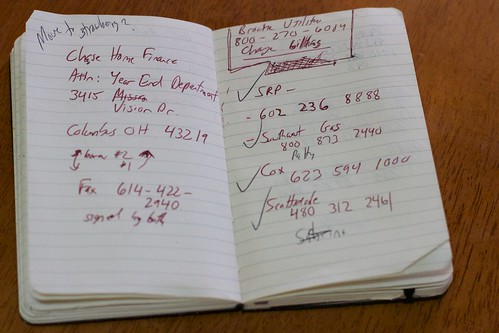 What is missing in the pages earlier are the darkest times I’ve had, after leaving my marriage and moving up to Strawberry, some very bad blank spots not worth note writing. Or even reliving.

But this page marks the beginning of the official end of my marriage, filing for divorce in March 2008- these notes were for me removing my name from the accounts for utilities at the house we shared in Scottsdale, and switching the ones for Strawberry (and the title) to my name.

I can barely touch that intense time.

There is very little after that. A few phone numbers, a note for work, a place I wanted to buy a special bottle of wine.

I wrote last week about the life history I have in 10+ years of blogging and flickr photos, but now I also have these fragments in notebooks and journals, and there are more bits of me in there not anywhere else. And to me, it’s fine that its a patchwork, that is the beauty of our human minds to weave the connections. It’s not about being some kind of monk like detailed narration of everything, just enough to have the pieces to jog the memory to fill in the gaps (or to leave the ones empty worth leaving empty). It’s not having some perfect system to capture everything like a record player.

So today, I started writing in the notebook again. now some 7 years after Peter game my notebook #1, and I have not even got one finished. He must be above 500 now ;-) 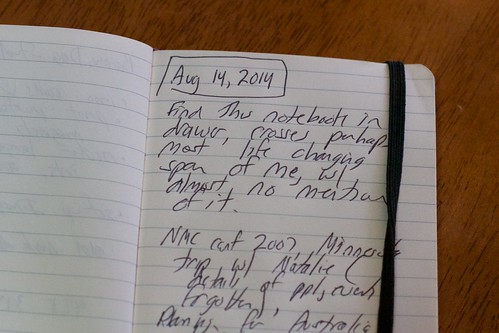 Just looking at that notebook, and following it back to that special moment and small thoughtful gift from Peter– in a world seemingly wobbling off its pivot, in the tiniest way, makes things more than just ok.

I wonder what will be on the next page.