In which this is my grand stupid theory of how we as single human almost interact with complex systems, like the internet. Lots of people are worrying over it’s climate as it gets less rainbowious unicornium. Me included. 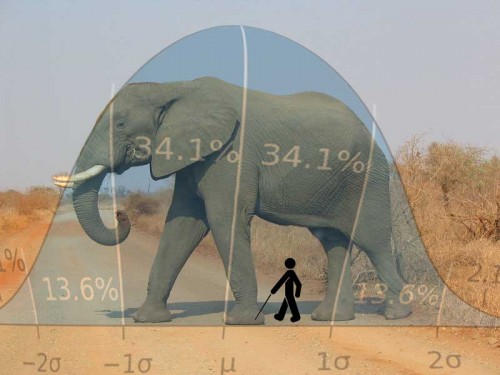 There is a thing we humans do (me included) where we tend to form a generalized conclusion of entities, cities, companies, technologies, communities, web sites based upon our singular experiences.

For example, someone who flies a lot gets some bad customers service from Zingbot Airlines, and on another trip, Zingbot cancels a flight that makes them miss a connection. “Zingbot is the WORST airline ever.” Or someone else switches cell phone carriers from BU&U to Dorhungie and finds much better connectivity when she travels. “Dorhngie has the best network in the country!” Or someone who lives in one part of the country always has trouble adjusting to the Burnt Region Timezone and tweets “BRT is an evil time zone”.

But many people have uneventful travel experiences aboard Zingbot Airlines, get decent signal from BU&U, and just feel the normal fatigue of travel when they land in a city in BRT.

For the most part, I’d bet the distribution of people’s experiences with complex systems like companies, service providers is something like: 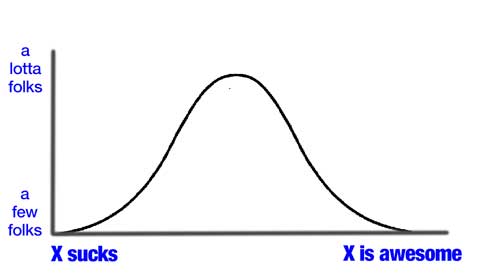 A few people have sucky experience, a few have excellent, and the vast majority are somewhere in the middle. Unless you have the ability to ask and chart everyone’s experience, or work to get a truly representative simple, how else do we make assertions that X sucks and Y is the greatest thing since sliced bread?

The thing is, the folks in the middle don’t feel an urge to be vocal about their un-extraordinary experiences, so the volume of vocalization is the inverse of the curve: 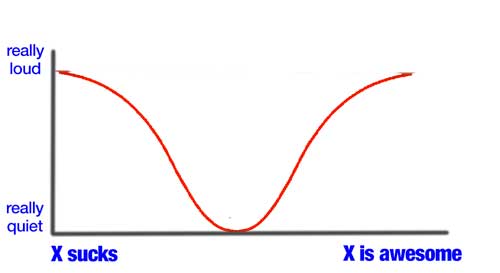 Now of course I am grossly simplifying the entire field of statistics and grossly generalizing the details of variation, so take this as just a hunch. A metaphor.

Like the dude with the stick, we quantify the entire animal from a few touches. Because they are our touches.

It’s not surprising, we live inside our own experiences.

In talking to Mariana Funes about this condition of generalizing one’s experiecnces to all, she points me to the extensive list of Cognitive Biases. Am I trying to describe:

Confirmation Bias “the tendency to search for, interpret, or prioritize information in a way that confirms one’s beliefs or hypotheses”

False Consensus Bias “a cognitive bias whereby a person tends to overestimate the extent to which their beliefs or opinions are typical of those of others. There is a tendency for people to assume that their own opinions, beliefs, preferences, values, and habits are normal and that others also think the same way that they do.”

I think the latter, but really it does not matter what you diagnose it as. 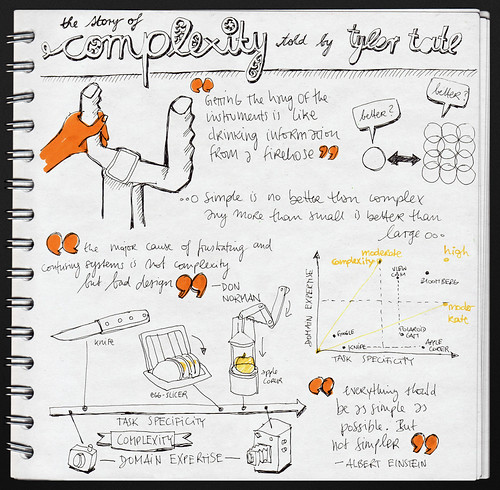 And now… the internet.

It’s sucky (and misogynist and trolled and threatening) and awesome (and infinitely potential and wonderfully disruptive and …). At the same time.

It probably always has been, there were the rude flamers in the listservs, and the originals of trolling go back to news groups (and likely beyond). It was just a much smaller sized elephant, so we saw less of the dirty end.

The amplitude of “bad” actions has gone way beyond rudeness, to abusive, to physically threatening and threats of real violence. Anonymous evil. That is what is becoming more alarming to many of us who are wondering about our assumptions of what was thought to be the great egalitarian space of hippie sharing.

And so we are being asked, as Audrey Watters has raised in (I gotta definitely love a good title, metaphor, and Dylan reference) Maggie’s Digital Content Farm.

Over the course of the last 6 months or so, I’ve felt a real shift in what it means (for me) to write — to work, to be — online. And let’s be clear: this affects me offline too.

Now Audrey is not forming this from one touch of an elephant; she spends a lot of time looking at it, listening to others. She is asking if she wants to be working on that find of farm:

How does one protest that?

Damn hard questions. Do we give up on the idea of agriculture because… it is no longer Old MacDonald’s domain?

And so I wonder, what is the whole picture? Which farm is it, Maggie’s or Old MacDonald’s?

I am so moved on a regular basis by the work of people like Jonathan Worth in his phonar work:

PhonarNation and other projects that I’ve been lucky enough to be involved with like World Press Reporting Change are about enabling people to participate in their own representation. They’re about taking people who otherwise might feel anonymised by the vastness of the web and using it to empower them.

He brings in an example a student’s courageous audio story that is so powerful I lose by breath (stop reading my junk and listen to Emma).

How much farming goes on in the middle of the curve, where there is neither singing cows nor Maggie’s nickel and diming brother? Small farms where people perform amazing feats of sharing? What do we know of the whole internet pachyderm?

The folks at reddit, as much a bell-shaped curve of bizarre and beautiful, share the things that might get lost in the doom and gloom of the internet going down the toilet. More Hygge please, indeed.

In The Space Between You and Me (a reading I would not have known of were it not shared by a katexic newsletter) Frank Chimera takes us with Jesse seven stories to the top of a building and illustrates how at a distance we lose the details of people, that if we toss a coin, we don’t even know its impact.

From the Educate Truth blog

And like the woman with the simple concept of the universe as a world balanced on the back of a turtle, Chimera suggests we lose track that it’s “people all the way down”:

And so our relationship with the social web has gone thus far. It seems silly to say that a network of people may induce person-blindness, but it can and does each day. If the web is a representation of the fabric of humanity, it is a thin veil draped over all of us. The way the web is currently wired accidentally strips the nodes of their personhood because of distance and turns them into odd, person-like entities. Jesse flings his coin from the rooftop.

Chimera had spoken to Brandon on his scrolling experience through thousands of human experiences in an online dating site.

Technology runs counter to our personhood; technology is complicated and shallow, but people are simple and deep. Our true needs are not complex. I remembered asking Brandon what everyone needed. His answer was profound and human: “To be understood.”

This kind of felt like my own misplaced assumption, that we have a space to find this understanding, especially as I myself seen none or much less of the festering foul puss the certainly exists in the curve. I won’t extend my experience to everyone.

Again, is the answer to give up on the whole concept of farming?

In some of my presentations this year where I talk about the 25th anniversary of the web, how Tim Berners-Lee’s March 1989 proposal to develop the web came back with key commentary from his supervisor:

Can you imagine where we would be if the remarks were:

Vague and irrelevant. Now get back to that library database project…

I wonder about an alternative future novel where this happened, the what every became of an internet was what was devised by the corporate forces, the telecoms or the AOLs/Compuserves.

Would we have a living encyclopedia? A platform where we watch 600 billion hours of video, for free, a month? A platform and means to build our own digital houses or just check into and like the mega motel 8?

And I could make an equivalent list of some rather horrific, offensive, and heinous web sites.

It’s the whole curve. And a whole lotta elephant in the middle.

This is what I see in that spectrum in the cases of finding out my photo had been catfishing potentially hijacked to defraud someone through a scam romance scheme… We can’t expect this to no happen, or to be regulated out of existence. But what is a small amount of positive, is that people have organized into the romance scam site to address this, and used the affordances of the web as a counter.

I absolutely find that Audrey’s questions are ones to take more than seriously; they are urgent, they are keys to this moving forward, and not seeing all the cat videos swirling down the hopper.

So yell it out, Audrey.

And I think you need to think about your own work. Where you work. For whom.

And then you must consider where you demand your students work. For whom they work. Who profits. Where that content, where that data, where those dimes flow.

The hard thing about not being with Maggie, where she and Pa tell you how things are, is… how do we go about this?

A start is trying to see, accept, understand the whole damn elephant, especially those parts we don’t normally come into contact with. Because we are damned to chores at Maggie’s Farm if we choose to believe it’s not there.

It comes down to something Mariana wrote in a tribute to Aaron Scwartz (I am lazy and I must must watch, you and everyone else should to, The Internet’s Own Boy)

You know, there’s sort of these two polarising perspectives, right? Everything is great, the Internet has created all this freedom and liberty, and everything’s going to be fantastic or everything is terrible, the Internet has created all these tools for cracking down and spying, and controlling what we say. And the thing is, both are true, right? The Internet has done both, and both are kind of amazing and astonishing and which one will win out in the long run is up to us. It doesn’t make sense to say, “Oh, one is doing better than the other.” You know, they’re both true. And it’s up to us which ones we emphasise and which ones we take advantage of because they’re both there, and they’re both always going to be there.

Both are true. And neither will probably “win” but could certainly domainate.

I’m still an optimist, not seeing a point in being anything else. But one not need not be a blind optimist.

Both are true, as is the whole elephant. 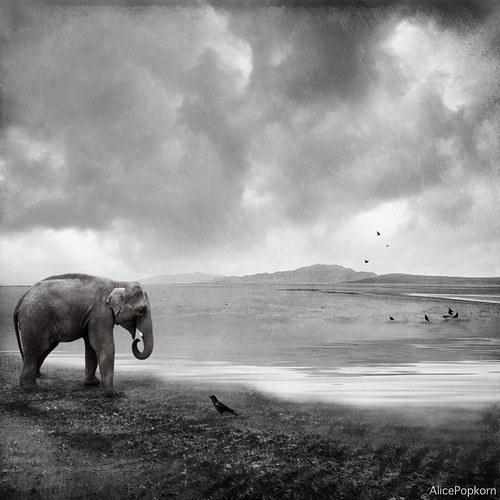