I vaguely remember the way we were taught in high school to research and write a paper. After formulating the topic/hypothesis, we constructed outlines. Then off we would trudge to the library, and use things like the antique card catalog, Citations index to find our sources.

As we read books, rolled microfilm, we would use 3×5 index cards as the means to record information we found in the library. In one corner would be the Roman numeral key to our outline, in another corner perhaps a number or code that represented another card where we would store the citation in formation.

Eventually you would have a stack of cards of nuggets and facts, that you would then sort. Gaps would be obvious. Then the writing was supposed to happen, by recasting in our own words what meaning we could read from the cards.

Of course in reality… well the memories are dusty and tinged like yellowing Scotch Tape. 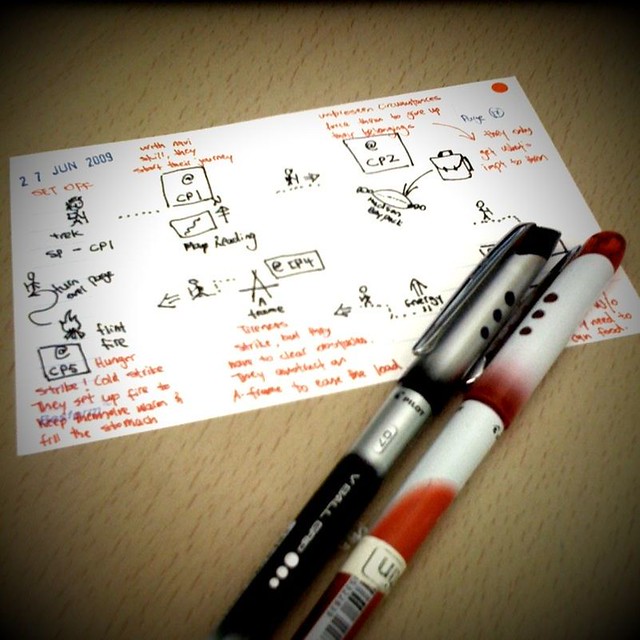 But that idea of a chunk of information small enough to fit on a card seems to me the way to think about using Smallest Federated Wiki. In high school, I could only use my cards, what SFW offers is a chance to see, borrow, even augment someone else’s cards. I’m aiming to go with Mike’s idea of Idea Mining, to use SFW as a self journal of summaries, notes on ideas from elsewhere (papers, links seen in twitter or feed readers, URLs dropped from the sky).

I see colleagues who are trying to use SFW (beyond the strangeness and quirks of the interface) trying to use it to collaboratively write together. This is hard, between knowing whose changes are more recent, the lack of a notification or separate comment/review system.

The thing is we have plenty of solid collaborative writing tools (Google Docs, EtherPad) that do this pretty well. I am doubtful this can be done in SFW w/o losing hair and sanity. This is because when we normally co-edit, we are working from/towards a single unified version of the document. The document itself is the center and ultimate referenced item. There is one paper, be it a draft, or version 24 or the final edited, polished on.

In SFW, everything is fragmented to atomic pieces, not joined, and you get into a whole new level of versioning hell beyond the problem of shoving documents back and forth as email attachments. It starts messy and then gets even messier, and people are left wondering who forked what when and why the edits are all scattered.

I’m not saying its impossible, and I am first in line to stand up and say I am Wrong when some folks pull it off, but in my measly SWF experience- this just does seem to be the optimal use of a federated Wiki. It’s like McLuhan noting how the first efforts in a new media first replicates the form of the media it replaced (early TV emulating radio shows, early web emulating printed pages).

Again, I am only saying this as a gut hunch; I do hope people experiment and perhaps come up with a protocol/process for group writing in SFW.

I do think SFW would work as a place to do background research, identify relationships, connect resources from different domains. This is the approach I am taking, my Journal entries are pretty much the Gardner Campbell-like “nuggets” I get when reading stuff in my feed reader, following links in twitter, but also things I come across in papers (well if I read more), but also from sources like podcasts. This quote on nuggets is from the syllabus for the Thought Vectors In Concept Space course Gardner co-led this year:

For each reading, we’ll ask you to take a passage from the reading that grabs you in some way and make that passage as meaningful as possible. It could be a passage that puzzles you, or intrigues you, or resonates strongly with you. It could be a passage you agree with, or one you disagree with. The idea here is that the passage evokes some kind of response in you, one that makes you want to work with the passage to make it just as meaningful as possible. A good length for your nugget is about a paragraph or so. Too much, and it becomes unwieldy. Too little, and you don’t have enough to work with.

How do you make something as meaningful as possible? Well, use your imagination. You’ll probably start by copying the nugget into your post. From there, consider hyperlinks, illustrations, video clips, animated gifs, screenshots, whatever. Make the experience as rich and interesting as you can. And as we go along, you’ll have more and more of your classmates’ work to link to as well. In fact, linking and commenting are such vital and necessary parts of this course that they have their own definitions page.

Obviously, one of the main goals of this assignment is to get you to read these essays carefully and respond to them imaginatively. Your work with “nuggets” should be both fun and in earnest. It should demonstrate your own deep engagement and stimulate deep engagement for your reader as well.

Substitute in SFW “page” or “card” or “journal entry” for “nugget” — “A good length for your nugget is about a paragraph or so. Too much, and it becomes unwieldy. Too little, and you don’t have enough to work with.”

Rather tan trying to have a topic for a paper pre-determined, I am just using my SFW Journal to capture the things I come across that makes me say “hmmm”. I am not trying to find stuff to fit a topic I want to pursue, I am looking for stuff that will suggest what topics I might pursue. 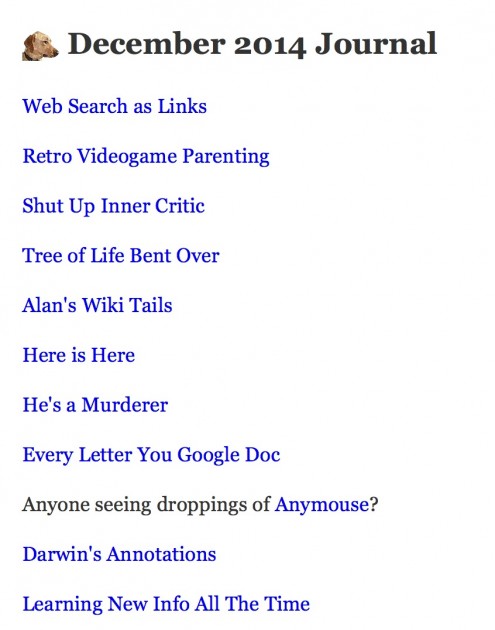 These are what I might bookmark in diigo or email to myself, but in this case, the SFW process has me reframe the idea in my own words (for the first paragraph) and then I might add the nugget in quotes, with some links.

So I have this pile of “cards” not to fit some outline, but just as a pile. As I go, I am looking to what other people are writing to look for overlapping themes.

I have something bubbling as a connection in 3 notes – the idea of our inner voice / critic affecting our creative expression (Shut Up Your Inner Critic), the availability of the digitized books that were in Darwin’s library where half contain his hand written annotations (Darwin’s Annotations), and hearing Sarah Koenig describe her continued lack of unconfirmed absolute knowing in her year of publishing the Serial podcast (Learning New Info All the Time).

I am not sure what this connection is yet, but I see some cross over. And thus, I now may use this as a quasi new lens as I scan my SFW neighborhood (and beyond).

My add to the process is creating a new Wiki Section “Connecting Bits to Bobs” where I hope to do this pulling together. 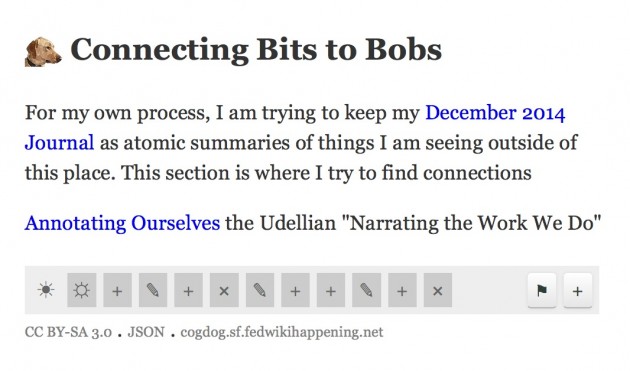 It’s still not anything tangible, I am just working more cards beyond mine into the mix and seeing if there is a something there there.

I’m not saying my way “is right” or that what other people are trying is “wrong”, we are all trying to find the meaningful things we can do in the SFW space, and try to find some of Mike’s Koolaid for ourselves.

There is something else about this FedWikiHappening, we touched on this in an informal Hangout with Mike, Ward Cunningham, Alex North, myself, and Kate Bowles (the first time I think we have heard or seen each other, brilliant experience). In atmosphere there is something between the immediacy of twitter and the more thought out framing we can do in blogs.

There is a pleasant/conducive proximity of working along side others, not in a completely synchronous space. This is the effect of twitter when it was less of a Buzz building data sucking machine, before it became Twitter, Inc. But it is less stand along and removed as a blog. SFW is in some weird, interesting dimension in between.

And thus I find myself during the day and when online thinking, how will I put this in SFW? 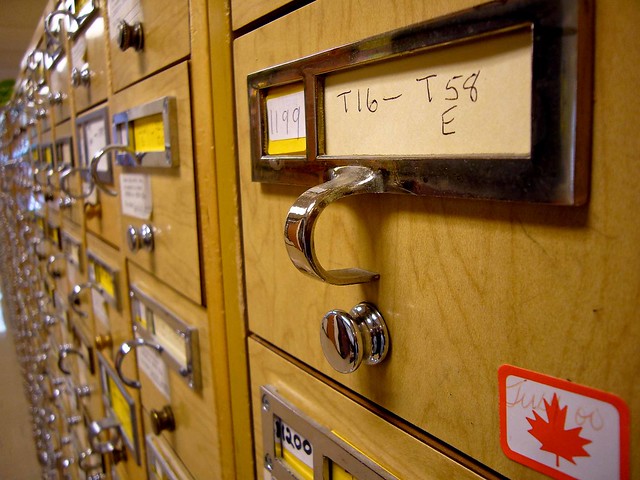 It’s why I am pecking away on a blog post at 12:30am. It’s got me thinking. I cannot say I am inside the cult lines yet, Mike, but I can smell the ditto ink. I’ll meet you at the card catalog after shop class.