Oh Google, what you do with my keywords.

Unexpected images, then leading me down some memories. It’s mostly connected in loose strands of unexpected fibers.

So I am working on an icon for a new secret half formed thing Brian Lamb and I are cooking up here at TRU. The metaphor is somewhat in the vein of a person looking into a video camera. I aimed my Google Images Search (preset with licensed for re-use, always) (almost always) to look for person movie camera icon.

Without clicking (I TOLD YOU NOT TO CLICK!) what kinds of images do you expect to see? Yes, there are icons of movie camera, and photos of real ones, plus scenes that are on a movie set.

And yet, way over in the side is a photo I have seen before, that seems out of whack.

Looking for an icon of a person behind a camera, one odd result in the mix…

Way down on the right– 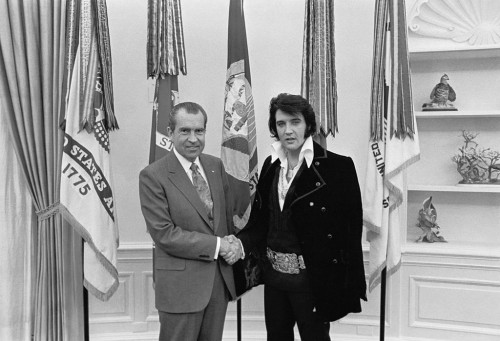 Tricky Dick and Elvis in the Whitehouse, 1970, from Wikimedia Commons

I am really loving the amount of information you get on a Wikimedia Commons entry; this very image is a featured image on both the English and Turkish language Wikipedia pages. It is “considered” to be one of the finest images.

The caption says a lot:

Elvis Presley meeting Richard Nixon. On December 21, 1970, at his own request, Presley met then-President Richard Nixon in the Oval Office of The White House. Elvis is on the right. Waggishly, this picture is said to be ‘of the two greatest recording artists of the 20th century’. The Nixon Library & Birthplace sells a number of souvenir items with this photo and the caption, “The President & the King.”

The Two Greatest Recording Artists of the 20th century ;-)

It’s part of a National Archives exhibit on this meetup. You can freely download all of the photos and documents and transcripts (because it is a the work of a federal government office, it is all public domain). There out to be plenty of media assignments one could do based on this.

The LA Times has a great detailed story of the event, including the part where Elvis pulled out a gun as a gift:

Then it’s time for gifts. Elvis pulls out the commemorative Colt 45 he had taken from his wall and carried into the White House, to the dismay of the Secret Service. (“We’ve got a little problem here; Elvis has brought a gun.”) He presents it to Nixon.

I think Johnny Cash did better on his 1972 Whitehouse visit, where he managed to play protest songs for Nixon.

But back to that image of Nixon shaking hands with Elvis And His Big Belt Buckle.

My mind goes back to my colleague at Maricopa, physics teacher David Weaver. 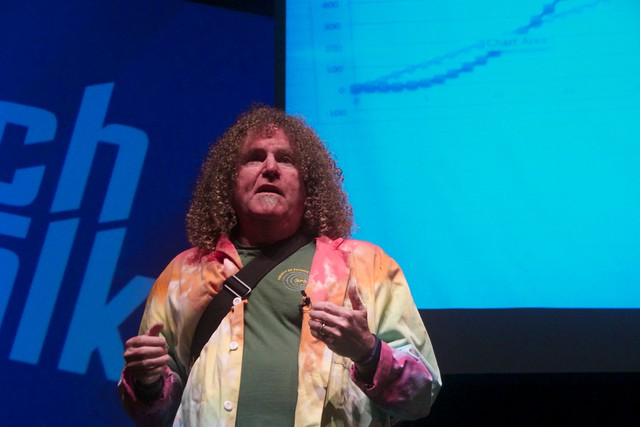 Always a trailblazer in teaching and teaching with technology, he was actually the first faculty I met on the job. He was the one who latched onto the web early in 1994 when I started talking about it. David claims (and I have no reason to doubt) is that he made the first college Physics Department web page.

There’s no record, since it was so early, it predates the Internet Archive.

But… and I always forget the connection- that very first web page featured this very image of Richard Nixon and Elvis Presley, and a very reasonable connection between the photo and the field of physics. Maybe Strange Forces?

I will have to ask him to fill in my gaps.

And next thing you know, it’s Nixon and Elvis.