A credible, textbook design process includes extensive pre-planning, testing, reviewing feedback, and making public once it has been thoroughly scrutinized.

That’s not happening here. The previous post was syndicated here from a new project being hastily assembled by me and Brian Lamb at TRU as part of my Fellowship. Part of the package was running “some kind of workshop” related to storytelling. That left plenty of room for latitude.

What we are planning is in part an iteration of an open DS106 experience — not as a course, but more like a professional development or seminar series. It’s being offered as an 8 week thing starting January 12. It’s maybe 8 weeks because that’s the rest of my stay here, but it also fits in well with the format I last taught DS106 as an online course for graduate students at George Mason University.

There are a few types of target audiences Brian described for me at TRU- staff, faculty, students are invited.

A more concise description from The You Show “Pitch”:

How do we communicate outward the work we do as learners, teachers, researchers? Portfolios suggest the final production. But like a film movie, a great deal of process happens that leads up to that, yet gets left on the cutting room floor.

We are looking for people interested in (a) creating sharable portfolios of their work; (b) communicating or mobilizing information about their work to a general audience; or (c) improving their digital media skills. If any or all of those outcomes appeal to you, we invite you to be part of an eight week open seminar we call “The You Show”, running from January until March.

This will be a hands-on, participatory experience. We will guide you through eight weeks of practical skill-building, mixed with what we hope will be examples of inspirational work and reflections. You will be expected to work, but then again that work will be directed to a product that should address your own objectives.

What we want to do is apply some of the fun and and approach of the digital storytelling course DS106 here at Thompson Rivers University (and for anyone else on the open web who wants to play along).

The lens for this, or better, the shtick is played out in the low budget production Brian and I (and Harry) made yesterday:

Hence what we came up with as The You Show (the top level domain was a throw away suggestion at a meeting with the Open Learning Instructional Designers; we were planning a “sandbox” site for some projects with them).

It’s a bit of a play on words, as is all language, right? So what you will work on is a show about you showing you, made by you, but also where you show the work being the showing of you. Clear as…

It’s again about the long running trope on this blog about “narrating” the work as you do it, ideally in a public blog. People get hung up on sharing their precious stuff (because someone will STEAL it); fine, do not give away the stuff. How about giving away the process of making stuff? Showing your thinking process? Citing your influences? 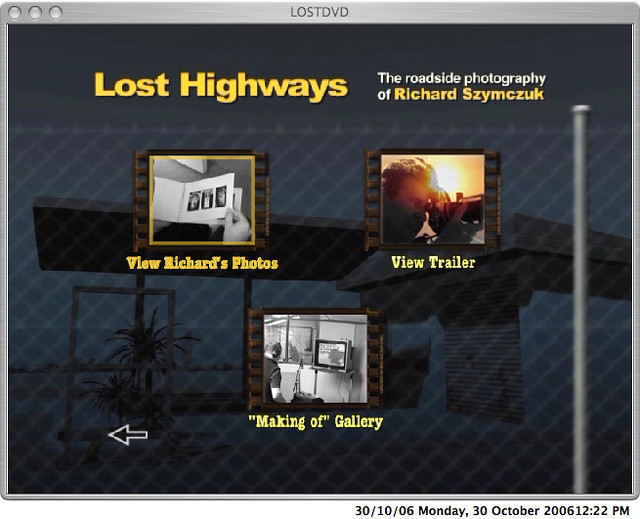 Sure, the final movie is the goal, but I love how I can watch again and listen to the director provide insight to all the scenes, the out takes, deleted scenes, background information on the music and the location setting.

Thus the You Show plays with the idea of producing what is on the Front Stage (learning how to create/express in media), but also providing insight to what happened Back Stage to make it happen (writing about the making thereof).

Thus in the vein of dog food consumption, after producing the video last night (blogged on the site as Front Stage) I also wrote the Back Stage post. Grand Ambitions are in place to do this for the duration. Variable mileage disclaimers apply.

As an experiment I wanted to see about Feed WordPress syndicating (which apparently is archaic) this over to my blog here; I do not want all posts, nor just stuff I produce. Actually what I wanted was just the stuff in the Back Stage category that I had authored (in the hope Brian or someone else may write these too [cough]).

I know you can get all kinds of feeds from WordPress, so it did not surprise me that with about 5 minutes of web searching I figured it out. So this is the standard URL for all things I have posted on the site:

What I learned is I can add a URL parameter that just lists the stuff I wrote in the Back Stage category (had to find it’s ID, 11, from the Categories dashboard)

And thus, ergo sum, ipso facto, I can make this an RSS feed capable of consumption by Feed WordPress

Of course, you may be interested in asking “What does this seminar look like?” “How can I participate?” “Will it be Open?”.

It’s all being added as we go. The skeletal schedule is listed as “Breakdown Sheets” The idea is each unit launches with a video (as in above), and a link to the suggested activities for the week, kind of like the weekly assignments in DS106. There will likely be a version of The Daily Create.

For the participants at TRU, we are offering it as a flexible option, but really hope people show up in person for weekly open discussions, drop in lab sessions. Brian is casting out to invite in some folks, like hopefully D’Arcy Norman is on tap to be here for the unit on Visual Communicating, and we will have something like a photo walk.

We will likely set up an optional email notification, copying some others in using TinyLetter (opt in, of course).

I do not know fully how this plays out for online participants. There will be a blog signup, aggregator on the site. Perhaps we can do some drop in hangouts. This is the unplanned part. It’s kind of like a Connected Course without the course part.

The You Show is assembling as we go. There should be a tad or two more coherence on the site later in the week.

If this intrigues you (if not I doubt you would be reading way down here) stay tuned, but this thing is on…

As a bit of remaking, the movie making metaphor is a repeat for me. I played with this back at the Maricopa Community Colleges in the mid 1990s of using it as a metaphor for having faculty work with a team of students on a multimedia development project. I created the fictional “Studio 1151” (that was the code for my center’s acronym, MCLI, expressed in Roman numerals) (clever eh?) (maybe) 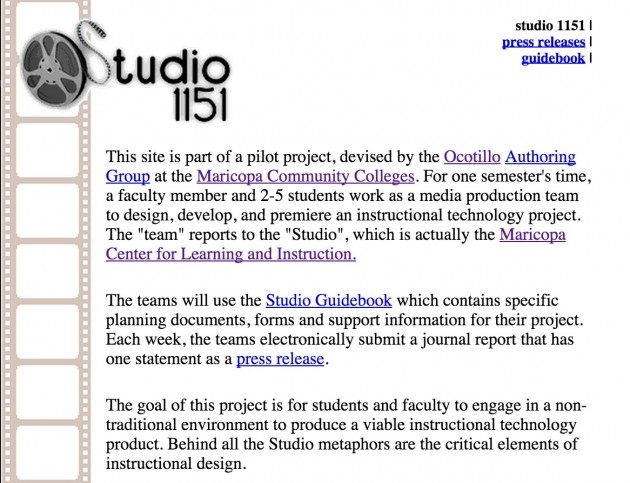 The Studio 1151 project, circa 1996, Maricopa Center for Learning & INstruction

The featured image (top) used for this post is Public domain Wikimedia Commons image from Charles Darwin’s Notebook “his first diagram of an evolutionary tree from his First Notebook on Transmutation of Species (1837)” I was just looking for some kind of sketch notes, but really love that the opening to his note is “I think”. Here he is back stage noting his ideas:

I think case must be that one generation should have as many living as now. To do this and to have as many species in same genus (as is) requires extinction. Thus between A + B the immense gap of relation. C + B the finest gradation. B+D rather greater distinction. Thus genera would be formed. Bearing relation to ancient types with several extinct forms”