Did you realize that we can process visuals 60,000 times faster than text?

There is something about that phrase that people just keep slapping it into presentations, blog posts about infographics, newspaper articles, published books about visual literacy. Google finds 195,000 references to it.

The problem is that it’s bogus. There is bubkas for anything to back it up beyond the sheer amount of times (3 times 60000) it is repeated as if it were fact. I have been on this case now coming up on 3 years. I am not letting go.

Not only is the statement utterly unclear (what is exactly mean by “processing”?) and how is it measured so precisely– there is no actual research, no published scientific study to back it up.

One of the more common citations is to an excerpt from a book by Mike Parkinson “Billon Dollar Graphics”. So if you write a citation to that it looks legit. Except, Parkinson just states the line again, never providing a source to back up the claim. He cites earlier a study by Doug Vogel which sounds similar, but is not related:

In 1986, a 3M-sponsored study at the University of Minnesota School of Management found that presenters who use visual aids are 43% more effective in persuading audience members to take a desired course of action than presenters who don’t use visuals.

How does 43% more effective translate into 60,000 times faster? My math is rusty. And I spoke to the author of this paper; he says his research had nothing to do with the 60,000 times claim. But who am I? I never published a book about visual communications. I’m just a thug with a blog.

Just formatting a citation does not make it valid as a reference, especially if the source of that reference does not support the statement made, e.g.

This is worthless. And not just because the link is broken. If you actually find AND read this reference (the said URL above is dead) all it says is

This 3M citation is not a research paper; it is from a brochure meant to promote the effectiveness of visual information, because 3M products (like transparencies, post it notes) are used to create visual information.

Let’s take the first statement — “Did you know that visual aids have been found to improve learning by up to 400 percent?” my answer is “no”- I do not know that. Can you tell me where the proof is to back that up? The closest is the research that people keep sending me to bolster the 60,000 times claim— a University of Minnesota paper published in 1986 “Persuasion and the Role of Visual Presentation Support: The UM/3M Study”. And actually the conclusion in that paper is

I tracked down one of the paper’s original co-authors, Doug Vogel, and in his response he said he knew of no research at that time that backs up the second claim, the one I am after, the 60,000 times faster lie.

The third claim “Would you guess that the average person only remembers about a fifth of what they hear?” has already been shown to be a mis-interpretation of a graph, and is definitely not a valid claim.

Both this and the 60,000 times claim are in the Jenn Manalo presentation notes that Darren found (from 1998). That makes us think that perhaps her using of these so called research studies got repeated enough to be sort of truthful sounding.

From a 1982 Business Week advertising section

Again the claim made in print with no backing citable reference. But now we have someone named Philip Cooper, president of Computer Pictures Corporation making this claim in 1982.

I assembled the image above via scraps I could find in Google Books. But with the help of a Real Librarian, Alice tracked it down the June 28, 1982 issue of Business Week… and it is not even an article but a “Special Advertising Section” on “Computer Services: Management’s Answer to Data Overload” 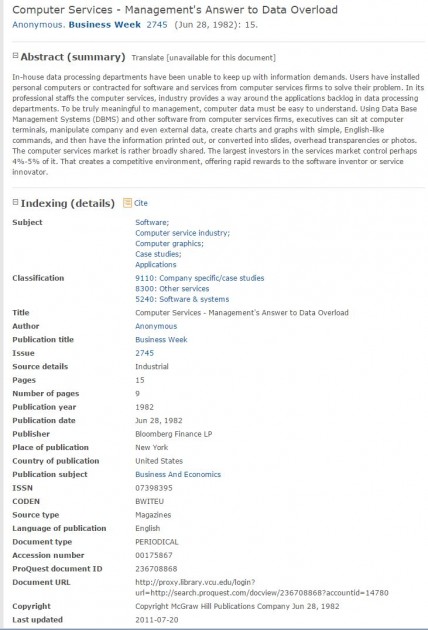 Interestingly, the small number of credits I found online to Cooper for his 60,000 times faster statement are in Spanish. e.g.:

Who is Philip Cooper? He was a graduate of the MIT Sloan School of Management sold his company Computer Pictures Corporation to Cullinet Software in 1982 – then he started a company working on a company called Palladian Software, Inc. Sometime later he was a partner at Goldman Sachs.

In an MIT MS thesis on start up companies doing work in AI, I found a reference to Cooper’s on theses from his Masters Science degree from the MIT Sloan School of Management “Artificial Intelligence: A Heuristic Search for Commercial and Management Science Applications” I could find no indication there that Cooper worked in processing of visual information.

Somewhere I did find a mention (was it LinkedIn?) that Cooper was now a Senior Lecturer in Finance at the MIT Sloan School of Management. And there I found an email address. I wrote him in February 18, 2015:

I’m an educator trying to track down a statement attributed to you in the 1980s about processing of visual information.

For a few years I have been pursuing the source of an oft repeated statement in papers, books, blogs, presentations that “humans process visual information 60,000 times faster than text”

I’m writing because a reader of my blog found a reference you made, published in a 1982 Business Week article. This is is the portion I could find in Google Books, it has been repeated in a presentations and articles about visual information

So can you shed light on what this 60,000 times statement is based on? I even tracked down your MS thesis, but could not find anything related.

I pursue this because I try to help people become better information literate; and this statement has been made so many times it is asserted as fact.

And I do have a $60 prize on the table for the person that leads me to the actual source.

Thanks for any information,

The only response response out of office message “I am away without access to email until 2/23”.

Still no word from the Dude. I did try to a message on the phone number I had found for him, I got an error message that Cooper’s voicemail box was full. What’s next, a trip to Cambridge? Is anyone willing to knock on the dude’s door and ask for the proof of the 60,000 times claim? There is a prize package of $60 sitting on the table.

This little bit does take it farther back than 3M.

Yet the re-iterations of this silly statement keep getting made, each re-affirmation micro-increasing the truthiness level. Because if you repeat it enough on the internet, it just seems that much more true. If you repeat sometime 60,000 times…

And then you get this kind of winner. a double bonus bogus claim combined into one sentence- It’s Dale’s Cone of Experience with a 60,000 times faster cherry on top:

It’s not like you have to provide a citation that the sky is blue, why bother to provide the resources to support obvious, accepted assertions like these? 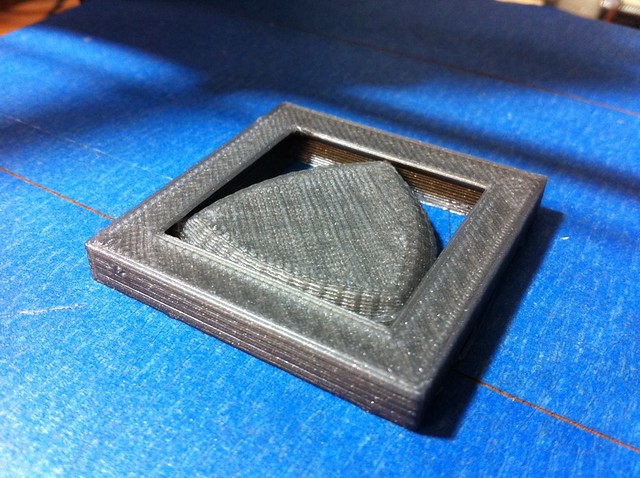 You keep repeating this stuff. I keep looking, I keep digging. Somewhere there is an answer. It’s dialed back to 1982, and I am dialed in to follow.