Talk about binary critiques. The Disruptor Poster Twin Child, Uber, is either the greatest thing since sliced something or it’s an evil empire rife with dirty little secrets. Uberization is even part of a marketer’s vocabulary.

And of course, it takes half an Silicon Valley latte’s brew time to be Thrun-ed into education.

You can paint it good or evil with a quick stroke of the keyboard.

After all, in a tweet length mode of thinking, complexity will not fit, especially if you are half filled your ideas with hashtags.

How can you begin to understand it without any first hand experience? I resisted for a long while, because (a) I live in such a out of the way place, there’s not even a traffic light or a cab, much less a car waiting to be summoned. And (b) I am just not urban hipster material.

I did have my actual first experience last June in LA. While at the DML conference, Tim Owens and I needed to get from my hotel downtown to visit our friend Mikhail. Tim offered to Uber, but his phone had died. So our idea was to install it on mine, he logged in, and got us a ride.

The thing is, it’s wonderfully efficient for the person who benefits from its use. That is a hard thing to counter. After all, if it makes something easier for The Most Important Person in the World (who? Find ye a mirror), arguments are uphill.

I deleted the app from my phone.

But on this trip, I was facing a trip from mid-town CHicago, checking out of an Airbnb place (uh the OTHER GOOD/EVIL DISRUPTOR!), to visit my friend in Hyde Park. Public transport, with my bags, meant a walk to the red line, then a stop and walk to the Metra train. And maybe an hour and a half trip.

I breathed hard, and gazed at my soul. Maybe it was time to investigate uber.

Here’s a lesson worth considering for you iOS users. When I launched the re-installed Uber app on my iPhone, I was still logged in to Tim’s account. That iPhone is kind of uber like, it remembers EVERYTHING whether you know it or now… I know Tim is nice, but I logged out.

On my first click for a driver, a nice lady showed up in literally one minute.

Now maybe this does not factor in, but I try hard to engage service providers in conversation. Cabbies can be garrulous but more often than not they are gruff. And you sit in the back like some jefe. My uber driver N was not gushy, but we talked about living in Chicago, how driving worked for her. I admitted I was a first timer. And what i learned is that she drives during the time her two kids are in school, so it offers her the flexibility to make money she spends on those kids.

I am not sure cab drivers get that. And she admitted she paid for her gas, and that Uber took a good chunk. But it worked for her. I did not ask, but I did not get a sense she felt exploited. Maybe their evilness is that deceptive.

The second time I used it was to get from a friend’s house in the suburbs to Midway airport. I did not do a test, but I doubt I would get a cab there in 6 minutes.

Maybe taxi companies should stop complaining about competition and develop a better dispatch system. I have not talked to many of them, but I doubt many taxi drivers make a large income. They have overhead fees that go to the cab company.

My step-kids in their 30s use uber regularly when they go out for an evening in Scottsdale, if they realize they have drunk more alcohol than is worth driving with. When I was their age? Well, I did some unwise driving in the same conditions.

I admit I do not know enough of the ins and outs to state anything as a declaration. I’ll leave that for others.

But I do have a sense that it’s more complex a thing than to cast one judgment across a complex ecosystem.

I expect someone with a better insight into the practices will school me on my ignorance in the comments. I would be happy if that happened.

But if you stare down the factor of convenience and low price over labor, you may want to think about using the self scanner at the supermarket, the automatic fare system for tolls, and heck, you better not purchase any food that comes in some kind of packaging.

It’s just not that simple. 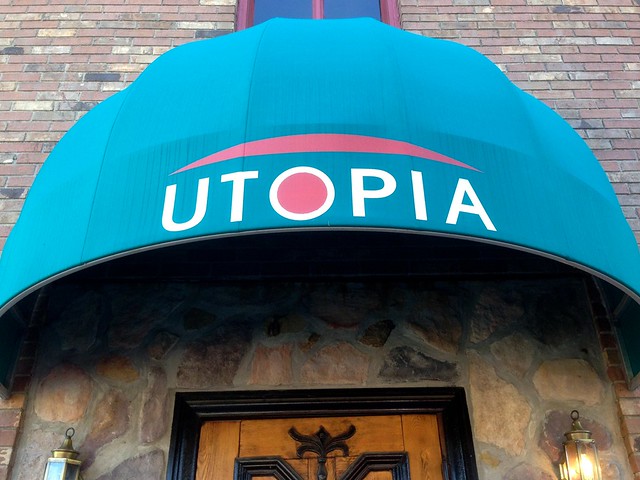 Please, give me your Utopian/Disutopian binary reasoning.