Meanwhile, in the future of education… pic.twitter.com/oeAhN3eKLO

which has duly been commented upon by Martin Weller.

my first free form visual associative wonder is “why is Richard holding up a dirty sock?”

On closer attention, of course, it is some sucker’s tie the Disrupter has deftly snipped. I guess he must have eaten one time at Scottsdale’s Pinnacle Peak patio, where they started doing this in 1957:

When first opened in 1957, the Pinnacle Peak was a general store and rest stop for travelers heading to nearby lakes. To boost sales of his small business, the owner decided to serve dinner on the weekends. It was a great success.

The Pinnacle Peak Patio “no necktie” tradition was started one night when a Phoenix executive came in for dinner. The owner, wanting to keep the atmosphere in his restaurant casual, told the executive, “Either take that tie off, or I’ll cut it off.” The executive did not listen and his tie was promptly cut off.

Wanting to be recognized as a victim of this policy, the executive demanded his tie be displayed for all to see. The necktie was stapled to the rafters along with a business card identifying its victim.

Seeing that ad again, just made me want to remix it up…

Richard Branson Fishes for the Future of Education

Richard Branson Sock Washes for the Future of Education

I’ve made a Photoshop file you can download where you can mix your own- the text after “AS HE is editable, and there is a layer made for the object to insert between his clutching fingertips.

What else will Richard do for the future of education? The possibilities are now up to you.

By the way, did you notice that the privilege for getting his disruption/fish/socks is £250 (plus fee). No irony there. 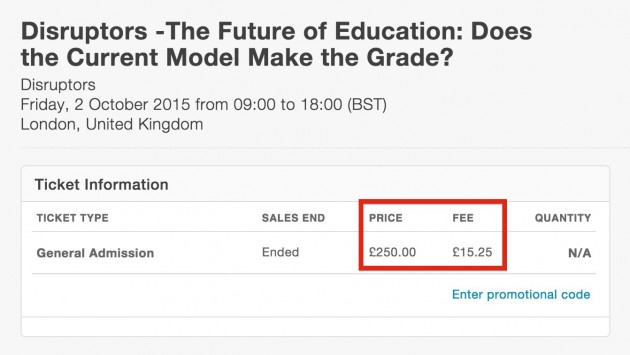 That makes the grade? Yep.