I should be working on stuff. I have stuff to do. But I’m deep in the internet rabbit tubes again, and I cannot just drop this trail.

The trailhead was a book. One that was published in 1924. Almost at random, on Sunday I pulled it from a shelf at Moose Mountain Antique store in Pine, AZ 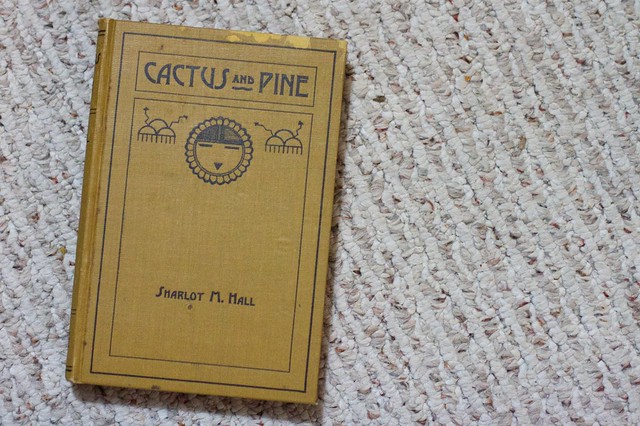 Sharlot M. Hall is a well known (well locally well-known) (maybe not) Arizona historian, writer, someone who lived through the settling of this area in the late 1800s (learn more about her). An Arizona history museum in Prescott is named after her.

The first edition of Cactus and Pine, published in 1911 (available in the Internet Archive) was a book of poems she wrote for her mother. The introduction in the edition I got tells of her “hurried” publication so her mother could see it in print, and how it took much more time, and requests, to produce the second edition.

Still mourning the loss of her mother, she wrote

The publisher urged a second edition, for the demand had continued steadily, but I did not care enough to trouble to let it be printed.

When the Great War came the publishing firm failed and a friend who loved poetry presently went to see what had become of the plates, which were to have been mine had I cared enough to claim them.

He wrote me that all the metal, including my plates, had been sold to a munitions factory, and that so far as he could learn my poems had been shot at the Hun, and, we might hope, had done their part in winning the war in a decidedly original way for poetry.

At breakfast today, I thumbed trough the yellowed pages, thick paper, slightly musty. I landed on a poem called “His Place” on page 43 and liked the images of the desert the poem raised. I like how she writes a blog-like intro to most of her early poems in the book. 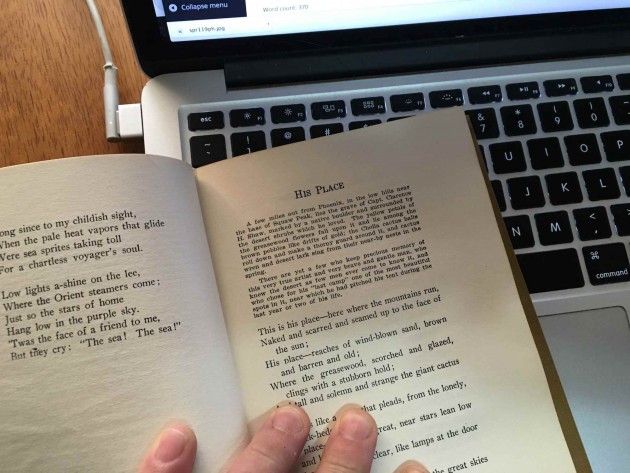 A few miles out from Phoenix, in the low hills near the base of Squaw Peak, lies the grave of Capt. Clarence H. Shaw, marked by a native boulder and surrounded by the desert shrubs which he loved. The yellow petals of the greasewood flowers fall upon it and lie among the brown pebbles like drifts of gold; the Cholla cactus balls roll down and make a thorny guard around it, and cactus wren and desert lark sing from their bear-by nests in the Spring.

There are yet a few who keep precious memory of this very true artist and very brave and gentle man, who knew the desert as few men ever come to know it, and who chose for his “last camp” one of the most beautiful spots in it, near which he had pitched his tent during the last year or two of his life.

I like how this location is described as “a few miles out from Phoenix” as the mountain she (and also I when I lived in Phoenix) knew as “Squaw Peak” in 2008 was renamed Piestewa Peak in honor of a Hopi soldier who lost her life in the Iraq war.

These days, its pretty much in the middle of Phoenix: 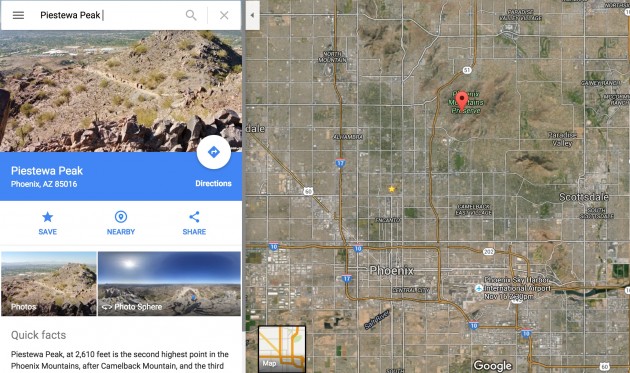 Hall’s evocative description of greasewood flowers, balls of cactus, the sound of the cactus wren can place that seen in the mind of anyone who who spent time in the Sonoran desert.

The Sharlot Hall Museum web site has a photo of Shaw’s grave: 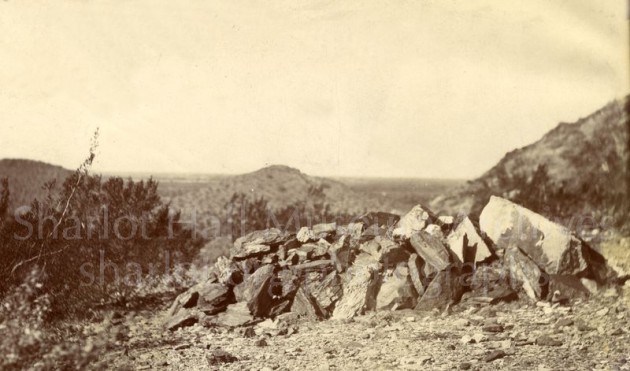 You cannot seen any sign of Phoenix in this photo (after all we are far away), but it looks pretty close to this modern view near the Piestewa trailhead, just above the parking lot. 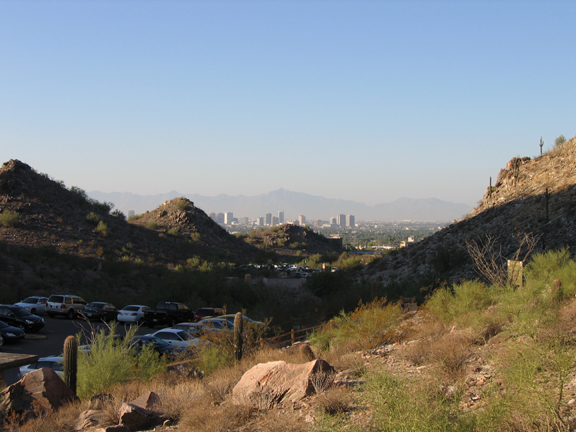 I wonder if there is anything left of Shaw’s grave.

But who is Clarence H Shaw? Who is this “very true artist and very brave and gentle man, who knew the desert as few men ever come to know it”? who knew he was going to die, and camped out two years on a desert mountain waiting for it to happen?

Most of the search results led me back to the Sharlot Hall archives.

With the “Captain” name, and photos of his marksmen medal, he had military experience 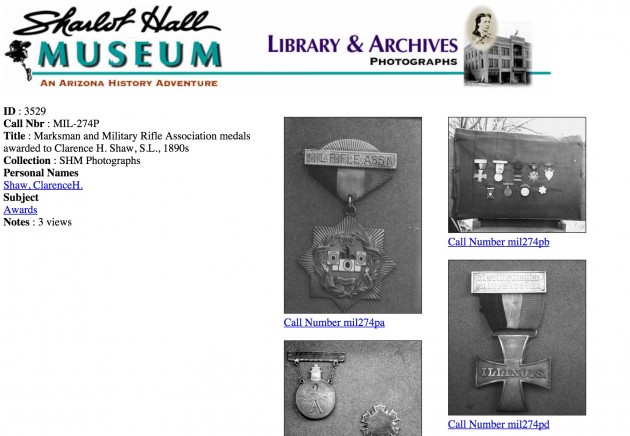 There are two photos of him in/near a cabin near the Grand Canyon. There is a set of photos of a “C. H. Shaw Campsite” on Bill Williams Mountain (a peak west of Flagstaff), I used one at the top of this post. I would guess from the date caption that this is actually where Shaw camped, not just a camp site named after him. 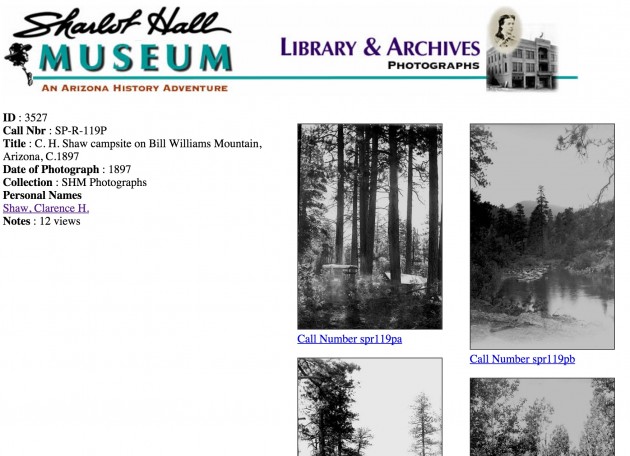 And there is a photo of “Clarence H Shaw” in Flagstaff: 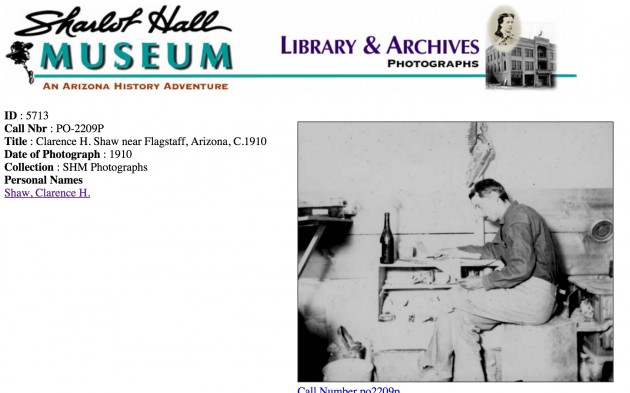 I am suspect of the 1910 date. Hall’s book published in 1911 has this poem about his grave, where supposedly he had camped out at for two years, and elsewhere I have found records indicating his death was in 1905.

It seems Shaw was a photographer, he has a credit for this photo in a 1907 issue of “Out West” 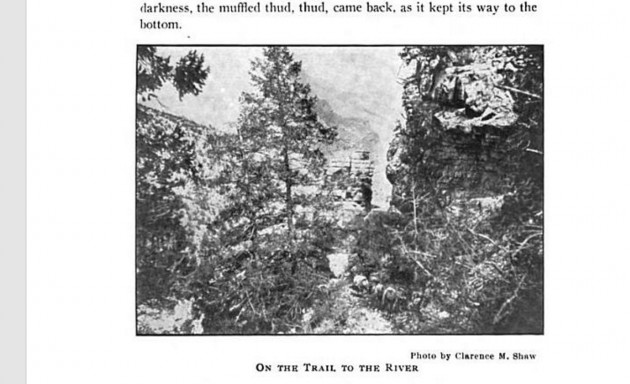 WorldCat has an entry for Photographs of rodeo and cowboy scenes by Shaw circa 1900.

And The Miriam and Ira D. Wallach Division of Art, Prints and Photographs at the New York Public Library has an entry for a few photos credited to “Clarence H. Shaw (American, 1872-ca. 1905) (Photographer)” for a photo of a Supai Medicine Man.

None of these sites has the image, I might need some library help yo locate them. But now I know that Shaw spent some time after his marksman years as a photographer around Arizona and California.

Sharlot Hall wrote in 1924 that “there are yet a few who keep precious memory of this very true artist”, and I would say that number has dwindled much lower. Well, I bump it up by one.

Here is to Clarence H Shaw, photographer, desert lover, lying where today and forever mingle, at the base of a desert mountain.