This will be too much to cram into a single blog post (which means I will do it anyhow) after 2 intense days at Davidson College for an Indie Ed-Tech & Personal API event organized by Kristen Eshelman and Adam Croom.

When I got the email I was doubtful I would go, some because it was within a week of getting home from another 6 week work/travel binge, and also because it would be a trip coming out of my own pockets. But then I thought how I have missed a few previous “hackathon” gatherings, how other folks coming were likely self funding, but largely because of the people coming- Audrey Watters, Kin Lane, Tim Owens, Jim Groom, Tim Klapdor, Tom Woodward, Jon Becker, Ben Wedrmüller, Erin Richey and more. And that colleagues from institutions were bringing students for perspective into the discussions. 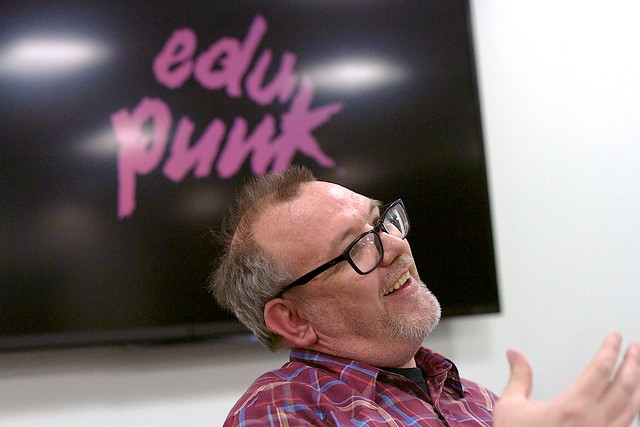 And those are bigger reasons to go to evens, not because someone is paying for you to go. Travel can be slimmed (staying at an AirBnB rather than a hotel, using points for flights).

These gatherings are where you go not solely for the program or slated presentations, but the potential for ideas to emerge. 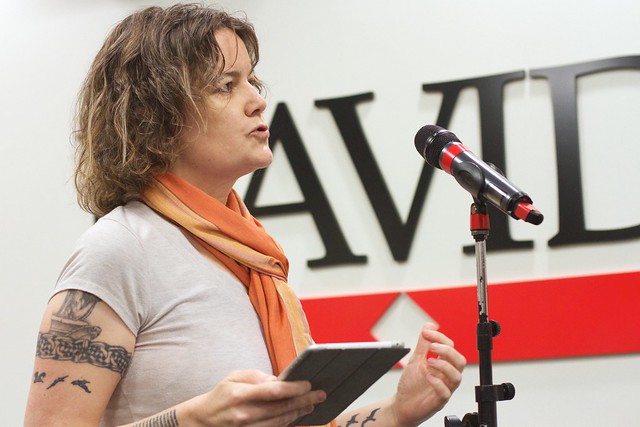 And as always, Audrey brought it all- ideas, metaphors, and energy for her opening talk on ‘I Love My Label’: Resisting the Pre-Packaged Sound in Ed-Tech (I suggest leaving my blog and absorbing Audrey’s notes and imagery, and give her some Justin Bieber loving props).

The whole theme of “Indie” picks up on threads Jim has blogged for years and assembled in a talk last fall he and Adam did at the DLRN conference— and Reclaim Hosting is fleshing out a whole fantastic Bryan Mathers themed record store motif.

Following Audrey’s talk (actually following the great discussion of it), we had API DJ Kin Lane school us in the principles of APIs. 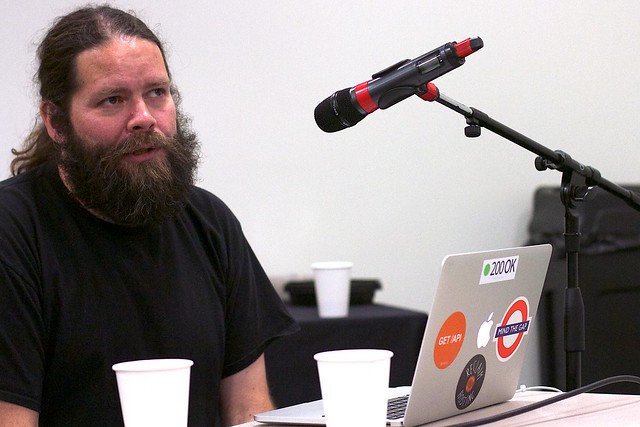 Like Audrey, Kin provides way more than slides to flip through but an abundant source of resources in a github hosted web site.

Our typical first reaction is to say we don;t know much about APIs, but Kin makes a clear point to show us ow we use them multiple times per day (bookmark, share, and ponder his questions/assertions there, do not shrug off APIs as a mystical acronym). I’ve built some web tools that tap into APIs, but I also want to go deeper into the space, and my hunch is it relates to my current/new project.

The part that struck me the most was Kin’s urging to be more diligent about knowing what information we are spreading, via APIs, to all the shiny web services. He turned us onto the Charles Web Proxy tool which identifies which web services are munching your data cookies and getting stuff about you via API based services.

Still, to a room of fellow of technically oriented folks, the steps that Kin does seems as his own activity inventory/monotoring.. super human. And he did suggest some starting strategies, which I would bet most of the room said internally “I ought to do…” but still the hurdles seem high.

I was pondering maybe a way to break this down into some scaffolded steps, which I may set out as a goal in the next few weeks.

This is not quite complete, but having an understanding of how your information sprayed and played about now, is the first logical step in pushing for the idea to have more control of that yourself, maybe via this notion of a Personal API (which is an idea others here are experimenting with).

#EdTech prototyping – an awesome session led by @erinjo, that led to a genius product idea led by @audrey_watters, @cogdog and some very inspiring students. Thanks, @mattervc, for the wonderful example.

The remaining time was following a design process led by Erin and Ben from Known, modeled from their own experience with MatterVC, where as a group we hatched four ideas for possible projects. This was amazing- rather than say, “We are going to sit in a room and build this Personal API thing”, it was (if I understand) a matter of identifying educational issues stories of where such a thing might underpin a solution to those problems. It was, more or less (and sped up) a flavor of the silicon valley software development process.

I remember doing something many stretches back for software development where we created personas, and tried to get at their needs as they used the software we were trying to design. What I liked better about the activity Erin and Ben led, was it started with interviews of the students we had in their groups, as we try to understand the things they deal with as students, project work, class dynamics, their own lives… 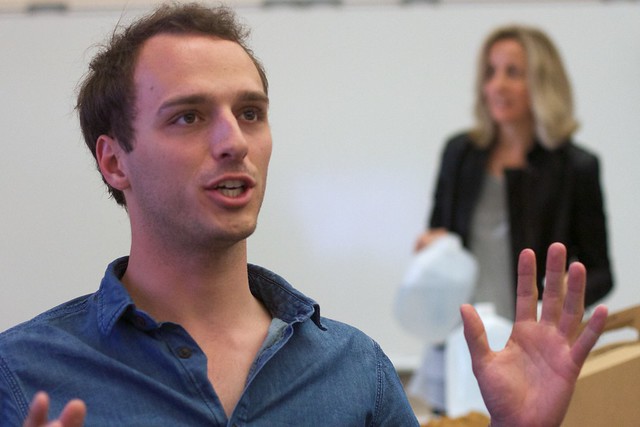 This went through a number of steps of flashing out who students are, their needs, and what were called “unexpected insights”, these being molded into a potential mission statement, sketched prototypes. We then had iterations of sharing to the group, getting feedback, refining etc.

Our group narrowed in on what we heard as important relationships students had with teachers who showed interest care, the mentoring process, but way being the “I’m an expert in the field will flow my experience.wisdom your way”. Yes, our thing was about relationships.

But our wheels spun, because this had little to do with tech, and then challenges of incentivizing mentoring. In the meantime, we could hear and see other groups sketching interfaces, heck, Tom Woodward had a working prototype in his laptop.

Do you know that heavy feeling in group projects, the cloud of doom that “we do not have anything”… I sense that was sitting there until our last planning round, when we needed to be developing a pitch.

And the idea just emerged. I cannot even say where it started. But we wanted to focus on non-traditional students, first generation ones, or just students so new to this system/game. How do they learn all the “How to College” stuff that is not formalized, the stuff they know from experience years later (and that is assuming they are still in the game)? Our playful example was something along the lines of “how to deal with there being no toilet paper in the library bathroom?” but more practical like “How do I design a double major in X and Z?” or “Is there a cheaper way to get the textbook for Z?”

So this would be some kinds of matching of experiences between stuff students Want to Know being shared from Stuff that Have Figure Out / Can Share. Something where the questions can be publicly anonymous, but with incentives to share answers (the mechanics are far from clear). It’s ore or less a knowledge matching system.

Here are some sketches (done by our student, Erika, yay, and shared in Slack.). 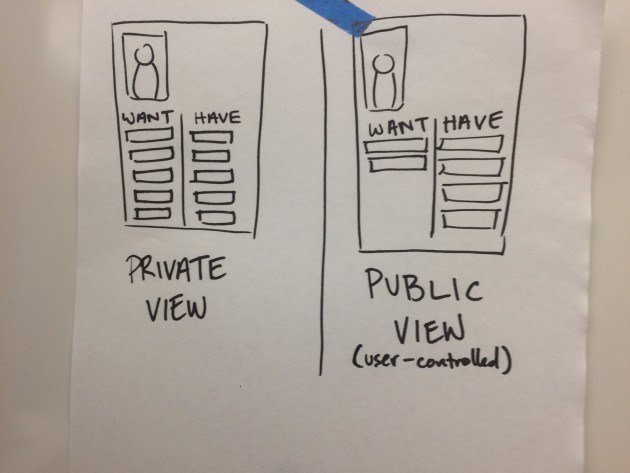 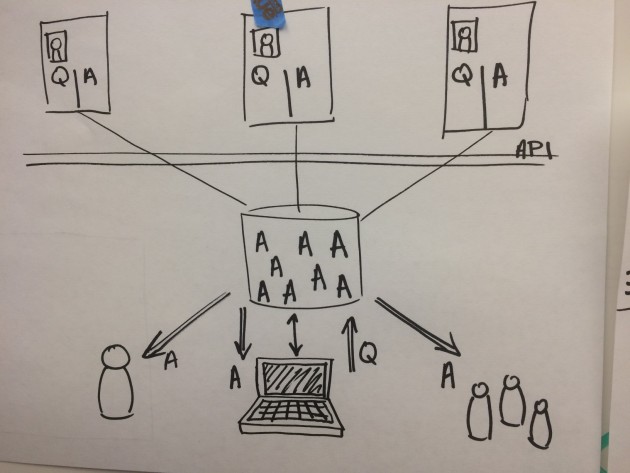 I was reminded of one of the first social sharing sites called 43Things (no longer online, but see Wikipedia). The idea was you would list 43 goals to do in life (“run a marathon”, “write a love song” “sail around the world”), people with the same goal could see each others, but more importantly, people who had done these things could connect and share their wisdom/experience.

This is a bit different, because new students likely do even know what they do not know. But 2nd year, third year students can provide a start with entering all the stuff they did not know as freshman that they know now.

And how ironic that as we were doing this, Mike Caulfield was pondering the exact same problem, with his idea of creating some kind of chatbot to help provide the answer service — and mentioning that this How to College question was part of Marcia Devlin’s talk at DLRN (added to watch list)

So we just have this idea, not that we built it, or even designed it. Work ought to continue in our Slack channel, as will the other 3 groups.

I think the idea here was to come up with possible technical answers to educational problems, with the idea that in answering them, idea will emerge that hinge on this idea of a personal API to manage our information.

And… the other great outcome of this time together was lucking into another great photo of Audrey. I just asked to photograph her binary tattoos, she did the Wonder Woman pose 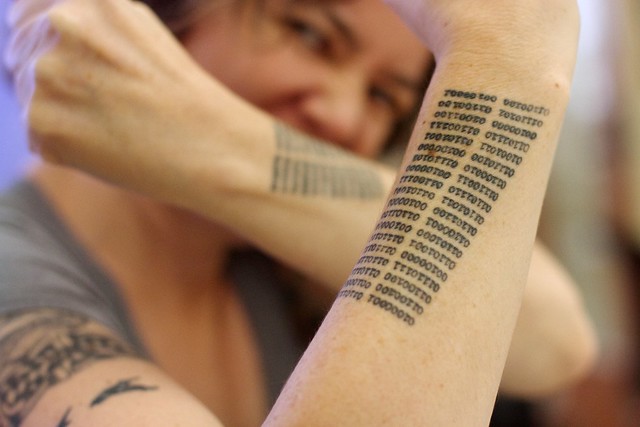 Ideas can be like photographs, you do not always know what will emerge, but if you just let things happen, if you just go with what’s happening, in a context of interesting surroundings… they often do.

Top / Featured image: That’s Erika, one of the students in our group at Indie Ed Tech gathering this weekend at Davidson, NC.

That’s my flickr photo https://flickr.com/photos/cogdog/25895938336 shared under a Creative Commons (BY) license